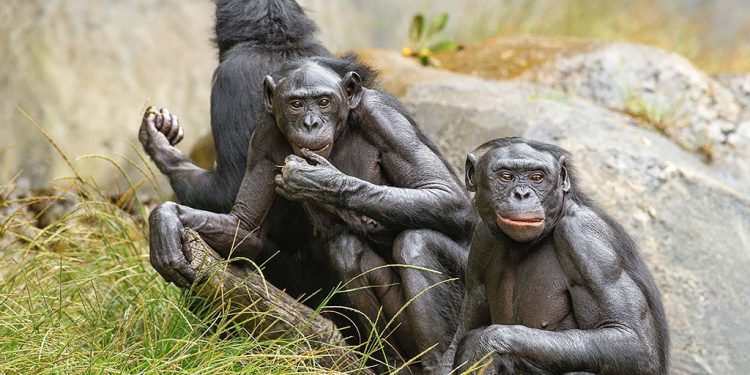 Bonobos at the San Diego Zoo. It is becoming clearer what China wants with Africa’s wildlife despite its failed plan to have some of these and other rare animals from the Congo shipped to the Anji Zhongnan and Taiyuan zoos. [Photo/ San Diego Zoo]

by Njenga Hakeenah
in Countries, Crime, United Nations(UN)
0
Share on FacebookShare on LinkedIn

It is becoming clearer with each passing day what China wants with Africa’s wildlife resources as the agenda keeps solidifying the Chinese connection in the continent.

Last year there was outrage from wildlife conservationists after details of a letter from the DRC’s environment minister to a Chinese company leaked.

The letter was in response to a request for a number of rare species from the Congo to be exported to China.

The correspondence on the request for eight African manatees, 16 bonobos, a dozen mountain gorillas, 16 chimpanzees and 20 okapi was posted on Twitter by an environmental activist.

All the requested animals belong to species threatened by extinction and they were to be shipped to two Chinese zoos- Anji Zhongnan in eastern China and Taiyuan in the northern province of Shanxi.

The letter signed by the DRC’s environment minister, Amy Ambatobe Nyongolo, is dated June 8, 2018, and seemingly agrees to the export of the animals. It was addressed to Liu Min Heng, CEO of Tianjing Junheng International Trade Corporation Ltd.

It cites an alleged agreement between the Chinese zoos and the Institute in Congo for the Conservation of Nature (ICCN), the custodian of the country’s fauna and flora.

The communication states that a team of Congolese experts should be hosted in China to ensure the appropriate introduction and conservation of the various species at the two zoos.

Adams Cassanga, who is the founder of Conserv Congo was passed the letter by a source.

He posted it online and launched a petition which has been signed by nearly 9,000 people.

Stealing wildlife from Kenya to Thailand

And, this was not the first time for a similar case on the continent.

In 2005, Thailand shot to the news headlines, in Kenya and globally, after a deal to ship 300 wild animals from Kenya to the Asian nation came to light.

Soon after this came to light, Shinawatra had to be smuggled outside the Village Market after protesters blockaded the entrance to the elite shopping arcade and conservation groups filed a court case to stop the deal.

The animals were superficially being ‘transferred, for tourism and research purposes and that they would not be mistreated or used for unethical research.

Shinawatra told the media of the circus then, “We’ve not come here to buy wildlife. We are engaged in a joint effort where instead of culling your excess wildlife, you send the animals to us for joint research because if we undertake joint research, it will benefit both of us”.

Luckily, the High Court blocked the deal after Kenyans protested against what they termed as biopiracy.

In January this year, 3 Chinese and a Kenyan were arrested over illegal possession of wildlife trophies.

Shang Li Yan, Xing Wei, Zhang Jie and David Oseko were arrested at their house in Nairobi where they were found with a leopard skin, ivory pieces, rhino horn and a live tortoise.

He was transiting from Mozambique to China through Nairobi and he was the first person to be sentenced under the new laws which came into force in December 2013.

Jian would spend seven years in prison if he was unable to pay the fine.

According to Cassanga, the Congolese government was finally put under pressure by the lobbying made around the world and subsequently the animals did not go to China.

“We are glad we won this battle against corruption and an illegal wildlife trafficking by our own government,” he says.

To curb the trafficking, Cassanga adds that they have intensified implications in the fight against the numerous gangs of traffickers in the DRC.

“Just in the last six months, we have made about six arrests, rescued six animals including a baby chimp, a bonobo, grey parrots and made a bust of ivory in Kinshasa worth about USD 140,000 last December,” he adds.

Cassanga is optimistic that justice will come adding, “We currently have two wildlife cases going on and one involving the sale of the bonobo to an undercover investigator may be sentenced in a few weeks. It will be the first case ever involving wildlife species to be convicted in a court of law since colonial times.”

And while the Chinese case may not have been a contributor, the minister who was involved resigned last week.

“Though not specifically because of the pressure but we believe it contributed for stepping down. At the end of the day the people won…” adds Cassanga.

Cassanga will be a speaker at several side events at the CITES conference of parties in Sri Lanka this year.

Victory over the biopiracy cartels is part of what he will talk about.

“That success story is part of our broader objective of fighting against the illegal trafficking of wildlife,” he enthuses.

You can also read how the Congo River could power Africa and what, where Chinese invest in Africa.