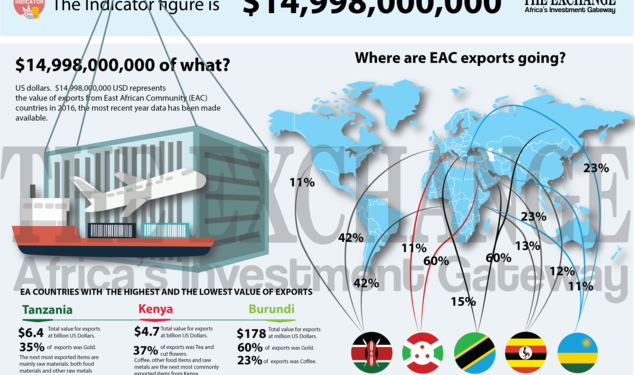 US dollars.  $14,998,000,000 USD represents the value of exports from East African Community (EAC) countries in 2016, the most recent year data has been made available.

Which EAC countries have the highest and which the lowest value exports?

Tanzania had the highest value of exports at $6.4 billion US Dollars. Nearly 35% of this figure is gold exports. The next most exported items are mainly raw materials: both food materials and other raw metals.

Kenya is close behind at $4.7 billion US dollars. Tea and cut flowers were the top exports from Kenya at 37% of its exports. Coffee, other food items and raw metals are the next most commonly exported items from Kenya.

Burundi had the lowest total value for its exports at $178 million US Dollars. However, 60% of Burundi’s exports was gold, a very in-demand metal. The second most exported commodity from Burundi is coffee that comprised 23% of the country’s exports.

Why trade in East Africa will be simpler – The Exchange

Why should EAC countries raise their exports?

As recent studies have shown, trade continues to be a key factor in economic development. “Of Mice and Merchants: Trade and Growth in the Iron Age” (reference below), shows that healthy trade relationships are necessary for economic development and growth to occur. While the EAC has been making progress on these issues, international trade connections should be valued and protected in the near future in order to reap the full benefits of trade over time.

Where are EAC exports going?

How are EAC countries planning to support growing exports?

The EAC body implemented the Single Customs Territory program in June of this year which is designed to minimize delays, quicken transit times and make exporting a more efficient process.

Kenya is leading the effort to streamline regional trade and specifically to minimize tariffs. In addition, there has been a change in approach to exports, focused on fostering new markets and new connections.

Particularly intriguing is the push to add value to raw materials within EAC countries instead of exporting raw materials and importing them back as finished products.

These changes are sure to strengthen the ability of firms to send exports into the global market in a timely and competitive manner.

What are the projected impacts of increasing EAC exports?

With higher exports we will see a healthier trade balance in EAC countries which results in increased prosperity for companies and subsequently for citizens.   Presently all EAC countries have a trade deficit and in a structural sense this degrades the potential negotiating power and self-financing power of the countries.

What investment opportunities are growing with this phenomenon?

It’s not a far stretch to envision that with improvements in export friendliness companies that are presently exporting will likely increase in profitability due to lower overheads and administration.  In addition, logistics and transportation companies are likely to see a higher volume and consequently higher revenue.   With exports comes a higher demand for trade finance so providers of financial services should also grow from an increase in exports in EAC countries.

“Of Mice and Merchants: Trade and Growth in the Iron Age” 2016

David L. Ross is Managing Director of Statera Capital, Distinguished Professor of Practice at Carnegie Mellon University Africa, and US Ambassador to the Open University of Tanzania.  David is active in growing companies in Eastern and Southern Africa through primary investment, investment advisory, strategic partnerships, and executive education. Connect on LinkedIn at http://tz.linkedin.com/in/davidlross1 or at [email protected]

Catherine Mandler is a Consultant at Statera Capital. Connect on LinkedIn at http://www.linkedin.com/in/CatherineMandleror at [email protected]