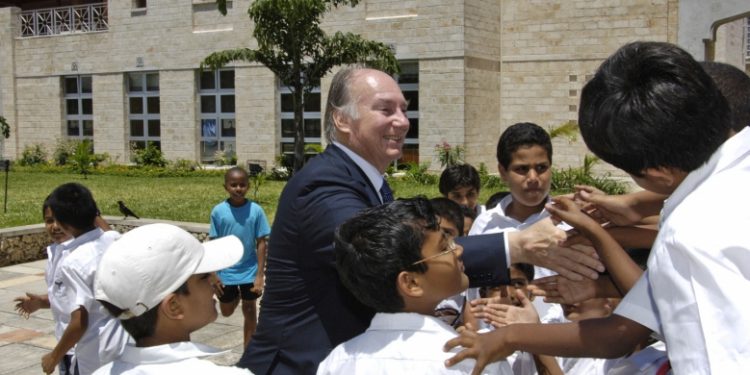 His Highness greets students on a visit to the Aga Khan Academy in Mombasa, Kenya. AKDN / Gary Otte

The Aga Khan has built and nurtured many business ventures, both non-profit and for-profit, to the benefit and betterment of the people of the countries in which they live.

Rarely does any so-called “world leader” impress me. Some of them probably mean well in that superior, “I know better than you do what’s good for you” kind of way.

But in the big scheme of things, they are all elected for very short periods of time in office. Australian Prime Ministers get only three years at a time. US Presidents get four, maximum eight years.

In my view, that means they have little or no realistic chance to effect meaningful change for the good and leave their mark, unless they attempt something radical and reckless in the short term, pandering to certain interest groups.

Therein lies the problem. It takes much longer to effect meaningful change.

To cut to the chase, the list of world leaders, or former world leaders who served in my own adult life-time, whom I admire, is pretty short.

I’m glad he lived a long life, and that many were touched by his dignity, wisdom and grace. It is a crying shame that he was unable to install a competent group of successors to carry on his legacy.

South Africa is one of my favourite countries. It’s an amazing, beautiful place. But in recent times it has unfortunately been ruled mostly by imbeciles. And there’s little on the horizon that looks like an improvement. Mandela would be turning in his grave.

The Aga Khan is a direct descendant of the Prophet Muhammad. He leads the Ismaili branch of Shia Islam. He took over from his Grandfather, the Aga Khan III, at the age of only 20, in 1957, when he was still a student at Harvard.

His followers number between 15 and 20 million. They are a multi-ethnic, multi-linguistic, multi-national group bound together by their faith, values, and way of life. They live in approximately 25 different countries around the world. They are, as such, a nation without a homeland.

The Ismailis are a very successful minority group in East Africa. They have been there for hundreds of years, after emigrating from British-controlled India.

There are sizable communities in Kenya, where the Aga Khan spent a large part of his own boyhood, Tanzania, and even Uganda, where the Ismailis were previously expelled by dictator Idi Amin back in the 1970s.

The Aga Khan was instrumental, via his personal friendship with Canadian Prime Minister Pierre Trudeau, in negotiating safe passage to Canada for many East African Ismailis following their expulsion from Uganda. Many also settled in the UK at that time, as they had ties to the UK from the time when both India and East Africa were British colonies.

The guiding tenets of the Aga Khan’s world view, which he encourages his followers to adhere to are pluralism, tolerance and a cosmopolitan ethic.

In his own words, “A cosmopolitan ethic accepts our ultimate moral responsibility to the whole of humanity, rather than absolutizing a presumably exceptional part … [it] will honour both our common humanity and our distinctive identities — each reinforcing the other as part of the same high moral calling.”

In other words, we are all different. Respect it, and accept it. But we are all human. We complement each other. Celebrate it, and help one another.

I would encourage anyone who has the time, to educate themselves about the Aga Khan, what he stands for, and what he has accomplished. A decent short summary is available here. Many more articles, books, short videos, interviews, and documentaries are available online.

There is far too much for me to cover here in a short article. But to summarize, I believe, based on the extensive research I have done, that the Aga Khan is a huge force for good in the world. Under his guidance and leadership, both spiritual, and material, the Ismailis have flourished.

The Aga Khan is also a savvy businessman. He has built and nurtured many business ventures, both non-profit and for profit, to the benefit and betterment of his followers, and the people of the countries in which they live.

This is relevant to us as investors, because via several listed companies around the world, particularly in East Africa, it is possible to partner with the Aga Khan, who is exactly the kind of person that I would like to be in business with.

A key part of the investment framework I have devised for the African Lions Fund is to ask the questions, “Does the company which we are looking to invest our capital in have ethical and competent Management?” and, “Who are my fellow shareholders?” If they are controlling shareholders, are they the sort of people we want to be in business with?

The Aga Khan Fund for Economic Development, has stakes in in Jubilee Holdings, Diamond Trust Bank, TPS Eastern Africa, and Nation Media Group, which are all listed on the Nairobi Stock Exchange.

The Kenyan-listed companies are all on my watch list. Jubilee Holdings in particular looks attractively priced at the current time. It is in the insurance business.

Nation Media, which publishes newspapers – both traditional and online – and operates radio and television networks in Kenya, as well as its regional neighbours Rwanda, Tanzania and Uganda, is going through a period of realignment and restructuring as it transitions to a leaner, cheaper to operate, subscription-based journalism model.

The Aga Khan founded Nation Media Group (NMG) in 1959. His predecessor, his grandfather, Aga Khan III founded Diamond Trust Bank in 1946 and Jubilee Holdings in 1937. These are long-established businesses that form part of the fabric of the economies in East Africa, along with the Ismaili community itself.

The Aga Khan Development Network also builds and operates an extensive network of hospitals, clinics, schools, and universities in many countries where significant numbers of Ismailis live, throughout Africa and in South and Central Asia.

In Tanzania, the Aga Khan Hospital in Dar es Salaam has a reputation for being the most advanced in the country.

This unique mix of development aid, building social infrastructure, and operating businesses for profit, I believe, sets the Aga Khan Development Network apart from any other aid or philanthropic organization I’ve read about or studied.

Not having to worry about politics, not having a nation to defend, and thus no need for any military spending, and being a “benevolent dictator” for life, not driven by short-term election cycles, are key advantages enjoyed by the Aga Khan as a leader, as he works tirelessly for the betterment of his followers, the Ismailis, and, consistent with his pluralist doctrine, all of humanity.

Tim is the CEO of Global Value Hunter. He’s a full-time investor and investment writer, having lived in Tanzania, Denmark, Egypt, Singapore and Australia. For more information, please visit www.globalvaluehunter.com