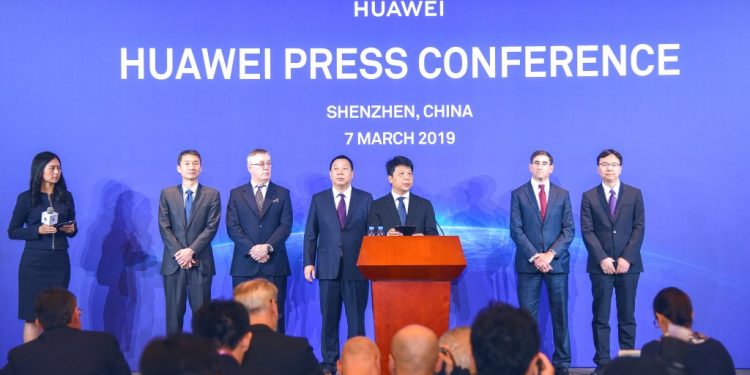 In August last year, US banned government use of Huawei and ZTE equipment

Chinese technology giant-Huawei has overcome business pressure experienced in the US market to post a strong performance in 2018.

This is despite a tough business environment faced by the company last year into 2019, where the US government has placed an embargo on its products, amid a trade war between China and the US.

The multinational telecommunications equipment and consumer electronics manufacturer managed to rake in CNY 721.2 billion (US$107.5 billion) in revenue, a 17.9 per cent increase from CNY 603.6 billion(US$89.9 billion) the previous year, a bullish growth in the face of adversity.

This came as the Shenzhen headquartered company maintained growth in its key markets among them the US.

Cash flow from operating activities however dropped 22 per cent to US$11.1 billion from US$14.4 billion.

During the year, the firm which believes in helping customers and countries hone their competitive edge invested CNY101.5 billion (US$15.1 billion) in Research and Development (R&D), ranking fifth globally in the 2018 EU Industrial R&D Investment Scoreboard. This is 14.1 per cent of its sales revenue.

According to official data released by the World Intellectual Property Organization (WIPO), Huawei filed 5,405 patent applications to this organization in 2018, ranking first among all companies globally.

At the release of its annual report, Guo Ping, Huawei’s Rotating Chairman said: “Information communications technology is rapidly working its way into every industry. This has triggered a digital, intelligent transformation – the driving force behind our digital economy. Through heavy, consistent investment in 5G innovation, alongside large-scale commercial deployment, Huawei is committed to building the world’s best network connections.”

He said Huawei will continue to strictly comply with all relevant standards to build secure, trustworthy, and high-quality products.

Ping said as the company works towards this goal, it remains focused on ensuring cyber security and user privacy protection, which are at the “absolute top” of its agenda.

“The easiest way to bring down a fortress is to attack it from within. And the easiest way to reinforce it is from outside. Moving forward, we will do everything we can to shake off outside distractions, improve management, and make progress towards our strategic goals,” Guo emphasized.

He said Huawei will continue to strengthen operational compliance, ensure business continuity and sustainability, and cultivate an open ecosystem ‘where all players collaborate and prosper together.’

“In addition, we will continue our organizational transformation to inspire greater passion and vitality across the organization,” he noted.

In its carrier business, Huawei launched its latest 5G and SoftCOM AI solutions, focusing on making them as simple as possible to use and maintain.

In the year under review, sales revenue of Huawei’s carrier business reached CNY294 billion (US$43.8 billion), roughly the same as the year prior.

In its enterprise business, Huawei continued providing cloud, big data, artificial intelligence (AI), and IoT solutions, as well as a range of products for data centers, all-flash storage, and WiFi.

By integrating these technologies into its digital platform, Huawei has facilitated the construction of smart cities, safe cities, and smart campuses, and has helped drive the digital transformation of its customers in the finance, transportation, and energy sectors.

In its cloud business, Huawei launched 160 cloud services and 140 solutions, and worked with its partners to serve customers worldwide with 40 availability zones across 23 regions.

Huawei has grown its list of partners to more than 6,000 in this domain, and is actively exploring the use of its AI services in more than 200 projects across 10 major industries.

In its consumer business, Huawei further increased its share of the global smartphone market and has further enhanced the positioning of its high-end devices.

It has also made major breakthroughs in building an intelligent ecosystem for all user scenarios.

In August last year, US President Donald Trump signed a bill banning government use of Huawei and ZTE tech equipment on security claims, a move that saw government units and contractors refrain from the company’s products.

On March 7 this year, Huawei moved to court in protest the ban, a time when a senior Huawei executive was facing extradition from the US.

READ:Huawei sues US over ban on its products

Huawei filed a complaint in a U.S. federal court that challenges the constitutionality of Section 889 of the 2019 National Defense Authorization Act (NDAA).

Through this action, Huawei sought a declaratory judgment that the restrictions targeting Huawei are unconstitutional, and a permanent injunction against these restrictions.

“The U.S. Congress has repeatedly failed to produce any evidence to support its restrictions on Huawei products. We are compelled to take this legal action as a proper and last resort,” Guo Ping was quoted in a statement by the company.

Founded in 1987, Huawei has operations in more than 170 countries and regions.