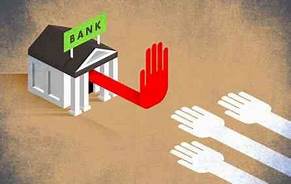 Micro financing is the go to solution for small businesses as banks tighten lending conditions to stifle Non Performing Loans (NPLs). In Tanzania, as elsewhere, NPLs are no longer a problem for individual banks, rather a national economic problem managed by the Central Bank.

The Bank of Tanzania (BoT) now provides guidelines for banks to curb NPLs and to help, it has created what is referred to as Credit Reference Bureaus. These bureaus are meant to protect banks against bad credit or more directly, to protect them against bad debtors.

In Tanzania, there are now two credit reference bureaus both meant to protect banks from crippling NPLs. Rather than deal with recovery of bad loans, the bureaus are meant to keep banks from lending to potentially ‘bad debtors.’

Unchecked NPLs could bring a bank to closure, that means affecting all other bank customers, now multiply that across several banks and you have the 2008 global economic depression. This is why governments are warrant to step in, because NPLs could effectively cripple an economy.

This is because the debtors are large corporations and companies that employ numerous people, so when these companies are forced to close doors because they can no longer be financed, then millions go jobless and the economy takes a blow; not to mention the social unrest that follows.

It is search scenarios that goes governments to fall as public demands better administration, regulation and protection. Greece and Egypt are good examples, in the 2008 economic crisis, these two governments fell under public pressure for reform.

However, how are borrowers protected?

A good indicator of a well performing economy is borrowing. If businesses and individuals are borrowing then it indicates confidence in the economy and a sign that investment is growing. However, when businesses shy from borrowing it means their investment capacity becomes limited.

Here we have two scenarios, one where borrowers are willing but the banks, using guidelines from the credit bureaus are not willing to lend. This is an indicator of a slowing economy where investment is low.

It means banks have set borrowing conditions that are simply too difficult for the would be borrower. Either interest rates are too high or collateral demands are just not practical or the bureaucratic process is just too long and costly, so borrows stay away from banks.

However, since business must continue, what is the alternative to borrowing from banks? A This brings us to the second scenario is where a myriad of financial black markets arises. These unregulated and unchecked lenders become the source of funding for businesses and individuals alike. It is a risky avenue but one that businesses would rather pursue than get stuck in the bottlenecked banking system.

In such a situations, the banks stand to lose. The business they were getting from borrowers goes to informal lenders who have less stringent regulations. Ironically, the informal lenders may even and usual do, have high interest rates. However, borrowers are willing to pay the interest rate as long as they can get the financing they need to run their businesses.

So banks are left to dance on a very thin line; they have to reduce their lending conditions but at the same time be cautious enough to keep NPLs at the recommended amount by the BoT.

In a country where the administration is pushing for self employment, a motivating fact is creating access to funding. After all, to start a business you need the seed and operating capital. So if the banks are to tied up in safety codes to provide lending then little investment occurs and the economy is hurt.

To maintain a good balance needs just that, a good balance. So if on the one hand the government is instituting mechanisms to protect the banks from bad debtors, it should on the other hand create a protection system for borrowers.

Just like there are Customer Satisfaction Indexes for other sectors of the economy like retail food and consumer product sectors, there ought to be an index for lenders. Such an index would rate how banks and other lenders are performing based on the rating of former borrowers and reports from auditors.

This is also a solution for governments to control and regulate the informal lending black market. If borrowers were to freely publish their satisfaction from lenders, then the general public would, by the first rule of economics, the law of demand, increasing borrowing from these sources.

The government would identify and register these lenders but allow them to maintain their own regulations and conditions for borrowing, after all, the customer has spoken. In other words, let the borrower chose where they want to borrow.

Channelling all borrowing opetions to banks is an easier and less complicated avenue to manage but it is very limiting. Banks admit that their lending capacity is much higher than the borrowing demand. However is it that Tanzanians do not want to borrow or rather they are deterred by the stringent borrowing conditions?

So, allow informal lenders to go public, register them just to get rid of the notion that they are operating under the table and let the economy grow. Should this be the case, then more and more Tanzanians who have a business idea would get funding to realize their start ups, the multiplier effect would be tremendous.

Bad loans? Hardly true, because you have to keep in mind the borrowers and the lenders have come to terms. The borrower is willing to pay higher interest rate in most cases as long as it means easier access to capital.

So how is this any different to allowing banks to freely set their own lending conditions that are favourable to borrowers?

Well for one thing, the lenders in this case have smaller lending capacity and so this is a scenario for smaller businesses (the real engine of economic growth) and not lenders for national infrastructure projects. Those large national level development funding needs can stay under the banks but allow start ups, recapitalizing and personal loans to be handled by small financiers.

Should the law be friendly to such venture, that is, small lending institutions to be mainstreamed, then the economy would get a boost as new business are created and as a result the government revenue would also get a shot in the arm with increased taxes.

Small lenders are the answer to increased financial inclusion, let the rule of economics work,  after all, we are a free market economy so let the hands of demand and supply shake, or in these times of corona-virus threat, let them nod to an amicable agreement and trade flourish.

Of course there is no true free market anywhere in the world, however, let there be less government control over the lending industry. In fact it should be the other way around, the government should encourage these small lenders with incentives and even use banks to increase funding to them.

You see, this is why small credit and lending societies work and are on the rise. They don’t have the worry that banks habour because they are on the ground, in the community, they live with these borrowers.

Banks on the other hand are indifferent institutions cold to the borrowers’ reality. You have the Tanzania Consumer Advocacy Society (TCAS), such institutions should take up this task, speak for consumers and in this case the consumer is the borrower.

On the other hand, a lending-borrowing index would tell the public which lenders and borrowers in a given location have the best conditions and are trustworthy, respectively. Now that is the rule of supply and demand, the very essence of economic development.

The Tanzania Consumer Protection Act should include borrowers as part of the consumers that need protection and advocacy.

Regulated under the Act and administered under the TCAS borrowers evaluations of the quality of lending services provided by any given lender would suffice to control the small lending and borrowing industry.

This also opens doors for micro-insurance firms to come in and insure these small businesses. There you have it, growing an economy with eyes only on big banks and national projects does not work, the engine of the economy is SMEs and banks are simply ‘too formal’ to meet the needs of start ups, so empower small lenders, back the with bank funding where need be and let the rule of demand and supply work.

Tanzania government relocation: What next for Dodoma?