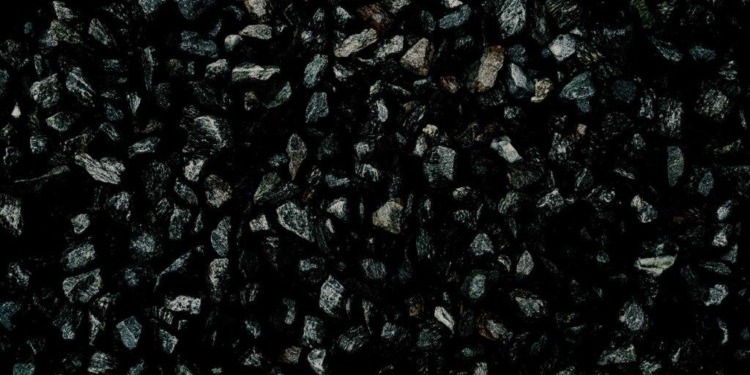 In Europe, political and social opposition to coal is mounting as efforts intensify to limit CO2 emissions.

The contribution of the commodity on economies in this bloc is too significant to ignore.

The death knell has not yet rung for coal as an energy source in this part of the world neither has it rung for the commodity widely regarded as the largest emitter of greenhouse gas emissions and responsible for climate change brought about by global warming. So dominant is this resource that respected global consulting firms have dismissed ongoing calls to decarbonize as “rhetoric”.

In March 2018, the Boston Consulting Group featured an article on its website titled “Why Coal Will Keep Burning” wherein authors Christoph Brognaux, Eric Boudier and company postulated that, “If you listen to the rhetoric, the outlook for the coal market can be summed up in one word: bleak. In Europe, political and social opposition to coal is mounting as efforts intensify to limit CO2 emissions.

In the US, cheap and accessible shale gas is rapidly displacing coal. And in China, concerns about poor air quality and related health issues have caused demand for coal to fall three years in a row, from 2014 to 2016. So is coal demand about to decline globally? Is coal headed for the ash heap of history? Such a development is unlikely.”

The relegation of coal to the dustbin of energy sources, the Boston Consulting Group (BCG) does not believe is likely. They are not the only ones who hold this view.

McKinsey & Company, another highly regarded consulting company, does not believe coal will not have a role in the energy mix of the world going forward. They are not as blunt in expressing their views as their counterparts at the BCG however. McKinsey & Company featured an article on their website proclaiming that the adoption and development of renewable energy will be an evolution that is gradual as opposed to a sudden revolution.

Both companies postulate that demand for coal will remain stable for the foreseeable future. The main reason for this is the seemingly unquenchable thirst for energy resources in numerous Asian countries, namely India and Indonesia. There are two things that could forestall and even contract the dominance of coal in the energy mix of the world and these are a contraction in global GDP as well as a faster adoption of renewable energy. A slowdown in global GDP is unlikely as the world is slowly starting to emerge from the COVID-19 pandemic induced recession. This resurgence globally is driven primarily by widespread economic stimulus packages from advanced economies. This has increased the appetite for energy resources. This leaves the second option on the table that can take the carbon out of coal, so to speak, which is the adoption of renewables. They are fast on the rise but will not completely render coal redundant.

The third aspect that could reverse the trajectory of coal would be comprehensive, coordinated regulatory action to limit global emissions. This is the rationale behind the ongoing Conference of Parties (COP) 26. Its object is to lobby the leading governments of the world to come up with and implement plans to reduce carbon emissions to combat climate change and its debilitating effects. A world run purely by renewable energy is not yet around the corner. Most the world’s electricity needs will still be fueled by coal and natural gas by 2040. This is according to the information compiled by “Looking Ahead: The 50 Global Trends That Matter” by Rabih Abouchakra, Ibrahim Al Mannaee, and Mona Hammami Hijazi. 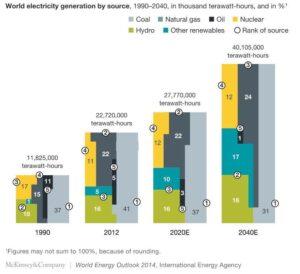 The graphic when considered in the context of the ongoing calls for decarbonization shows an interesting paradox. Despite the boom in non-hydro renewable energy sources by the year 2040 the International Energy Agency projects that this component of the energy mix of the world will account for only 17 per cent of the world’s energy.

Unfortunately, sub-Saharan Africa and south Asia continue to lag behind with close to 1.3 billion people going without electricity. By 2030 75 per cent of the one billion people who will still lack electricity will come from sub-Saharan Africa. Electricity supply in this regard is not only a matter of convenience but an imperative for economic development and health. People who do not have access to electricity will burn firewood – one of the leading causes of tuberculosis. 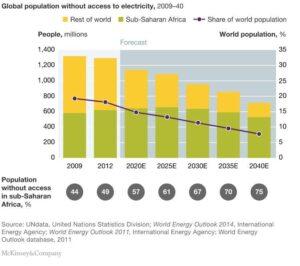 Coal in SSA remains king because countries that make up this bloc cannot afford to be without this energy source. The calls for reduced use of the commodity are well-intentioned but the implications of this cannot be overlooked. Countries in this part of the world depend on coal as a source of economic value, employment, and energy. South Africa’s government has on occasion stated that coal has become more important than gold. Statistics South Africa estimates that, “The coal mining industry contributed approximately R37 billion to the economy in 1993, with gold contributing R115 billion (value added at constant 2010 prices). In 2013, coal contributed R51 billion to South Africa’s economy, compared with gold’s R31 billion.”

Coal has eclipsed the precious metal that built the nation! 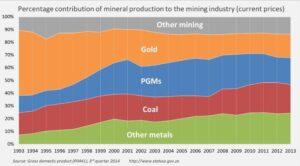 Coal accounts for 72 per cent of South Africa’s energy needs and is a critical employer.

Zimbabwe’s case is peculiar in that it is endowed with massive coal reserves it has not made the best use of. The in-situ coal reserves in that country are estimated at around 26 billion tons. Coal could play the role it plays in South Africa in Zimbabwe. The drive to decarbonize the world’s energy mix could upset the very delicate economic balance of economies that make up SSA.