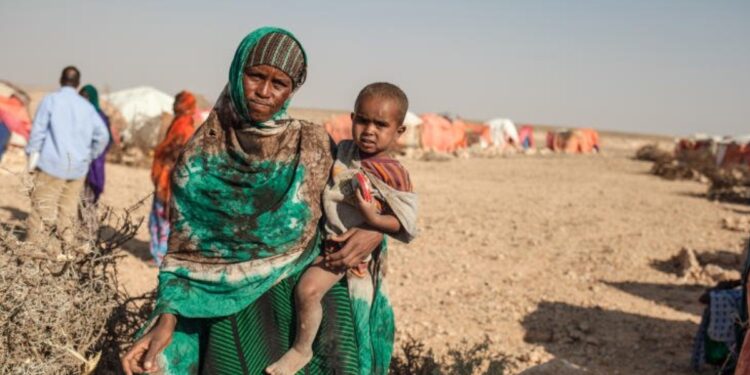 the AllAfrica Global Media Group, says it is bringing key stakeholder under one roof on a virtual panel under the theme: “Gender equality for a sustainable future”. Photo: File

An extended, multi-season drought is driving acute food insecurity in the region

Multiple data, including that of the African Development Bank (AfDB) indicates that Africa holds the key for feeding the nine billion people that will be on Earth by 2050.

While delivering a passionate speech at Iowa State University in the US in 2017, AfDB’s President Akinwumi Adesina noted that the continent sits on 65 percent of the uncultivated arable land left in the world.

Drought on the continent

Fast forward to 2022 and millions of people in the Horn of Africa are facing severe hunger.  According to the UN’s Food and Agriculture Organization (FAO), an extended, multi-season drought is driving acute food insecurity in the region.  FAO said that 12 to 14 million people are now at risk as crops continue to wither and animals weaken.

The organization noted that resource-based conflicts are escalating as competition for water and pasturelands increases, and malnutrition rates are rising in affected areas of Ethiopia, Kenya and Somalia.

FAO said the issue highlights the need to sustain the rural livelihoods that underpin peace and food security across the Horn.  The organization noted that food security outlook in the region will be highly dependent on the performance of the upcoming rainy season, with forecasts currently uncertain.


“In a worst-case scenario in which the rains completely fail and agricultural-dependent communities do not receive adequate support, the number of highly food insecure people could climb to 15-20 million – with some worst-affected households facing “catastrophic” hunger conditions,” FAO said.

Michael Dunford, Regional Director in the WFP Regional Bureau for Eastern Africa said shortages of water and pasture are forcing families from their homes and leading to increased conflict between communities.

He noted that further forecasts of below-average rainfall are threatening to worsen and compound dire conditions in the coming months.  “Harvests are ruined, livestock are dying, and hunger is growing as recurrent droughts affect the Horn of Africa,” he said.  “The situation requires immediate humanitarian action and consistent support to build the resilience of communities for the future,” he added.

UNFPA said the drought has impacted pastoral and farmer populations across southern and south-eastern Ethiopia, south-eastern and northern Kenya and south-central Somalia. The impacts are compounded by increases in staple food prices, inflation, and low demand for agricultural labour, further worsening families’ ability to buy food.

The UN-backed organization added that malnutrition rates also remain high across the region and could worsen if no immediate action is taken.

Humanitarian organizations have time and again called for help to assist the millions of people facing drought.

In November 2021, the Inter-Governmental Authority on Development (IGAD) and the FAO called for a scale-up of contributions to existing and future Humanitarian Response Plans (HRPs) stating that the response was grossly underfunded in the relevant countries.

“Through rapid, collaborative action by all actors, we can safeguard the lives and livelihoods of communities currently bearing the worsening effects of the drought, while at the same time, protecting households’ longer-term resilience,” the partners said.

In October 2021, the UN’s humanitarian affairs office (OCHA) warned that immediate action was needed to respond to the severe drought that is ravaging communities in Kenya’s dry regions – categorized as Arid and Semi-Arid Lands (ASAL).

“People in the ASAL region are facing a dire situation”, said Stephen Jackson, UN Resident Coordinator for Kenya, as he launched the humanitarian Flash Appeal for the Kenya Drought response.  Speaking from Nairobi, Jackson said people in Wajir, Northern Kenya, had not seen rain for over a year. Acute malnutrition rates are rising rapidly, posing an imminent risk to children and pregnant and lactating women.

Humanitarian assistance to respond to drought

For instance, the US Agency for International Development (USAID) is providing more than $39 million in additional humanitarian aid to meet the needs of people in Ethiopia, where more than 6.2 million drought-affected people are estimated to need urgent food assistance in 2022.

USAID is working to scale up its assistance across the Horn of Africa, including in Ethiopia, to respond to the driest conditions in four decades.

“Through USAID partner the World Food Program, this additional support will provide 1.6 million drought-affected Ethiopians and refugees with food assistance, including school meals, as well as emergency nutrition for children and pregnant and lactating women,” the organization said in a statement on February 14, 2022.

On December 20, 2021, the United Nations and humanitarian partners in Somalia released the 2022 Humanitarian Response Plan (HRP) for Somalia. In a statement, the organization said the 2022 HRP would seek close to $1.5 billion to assist 5.5 million of the most vulnerable people in Somalia.

The UN said it was releasing US$17 million from the Central Emergency Response Fund (CERF), bringing CERF funding for Somalia in 2021 to $52 million. The funding was in addition to just under $60 million provided by donors to the Somalia Humanitarian Fund.

Commenting on the finding, UN Humanitarian Chief Martin Griffiths said the lives of the people in Somalia are on the line, and there was no time to lose.  “To save lives in Somalia and avert another humanitarian catastrophe, we must release funding now so that people can protect themselves from further hunger and impoverishment,” Griffiths said.

“I am releasing $17 million from the Central Emergency Response Fund today to enable humanitarians to scale up critical operations. I count on other donors to follow this lead and urge them to generously support the Somalia Humanitarian Fund.”