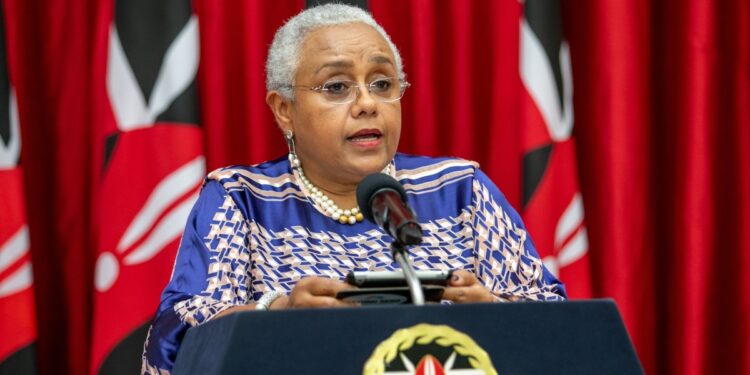 Speaking on Friday, February 25, Kenyatta noted that private-public partnerships were viable for raising resources to support the sector.She invited global financiers to back Africa’s weak maternal and child health systems, which she said were overstretched by societal challenges.
These include Female Genital Mutilation (FGM), Gender-Based Violence (GBV), teenage pregnancies, and early pregnancies marriages.“Through private-public partnerships and collective investments, we could deepen our work around reproductive maternal, adolescent and child health,” Kenyatta said.She said Africa could end its high maternal and child mortality if the sector had enough resources.“We must be steeled by the possibility that we can achieve zero maternal and child deaths by devoting necessary expertise and resources,” she said.Through partnerships and fundraising platforms such as the Beyond Zero marathon, Kenyatta said her organisation could pool adequate resources to supply mobile medical clinics to all of Kenya’s 47 counties.Besides the mobile clinics, the First Lady said Beyond Zero had rolled out the medical safari initiative to enhance access to health services by vulnerable communities to support Kenya’s universal health coverage plan.“More recently, we have expanded our focus to respond to unmet health needs through the Beyond Zero Medical Safaris. This program has contributed to the strengthening of our national resolve towards universal healthcare by enhancing the capacity of our health systems,” the First Lady said.

Cancer burdenOn Africa’s rising cancer disease burden, First Lady Margaret Kenyatta called for increased screening of particularly cervical and breast cancers, saying the two variants had the highest mortality rates on the continent.“As we celebrate our work, we are, however, reminded that more needs to be done; especially around screening and detection of cancers, specifically cervical and breast cancers. These remain a growing concern with high mortality rates in our region,” she said.

In a related story, stakeholders in the fight against cancer remain upbeat that Kenya is on the right trajectory amid enhanced efforts to address the health challenge.Council of Governors Health committee chair and the Kisumu Governor, Prof. Anyang’ Nyong’o said the country has witnessed intensified efforts to address the challenge even as he called for more investment and enhanced collaboration with the private sector.“There is a major role for all of us in placing preventive health as a central Pillar to our health services, cancer included. Let us focus on the new UHC and NHIF and see how they can work together to support primary healthcare to deal conclusively with cancer,” he said.

Earlier this month, President Uhuru Kenyatta opened a regional cancer centre at the Coast General Teaching and Referral Hospital in the coastal city of Mombasa.The ultra-modern facility, developed in partnership between the national government and the county government of Mombasa as part of the Universal Health Coverage (UHC) pillar of the Big 4 Agenda, comprises high-tech equipment to offer comprehensive cancer care.The centre, which will cater for cancer patients in the region and beyond, becomes the second public facility of its type in Kenya after the one at the Kenyatta University Teaching, Referral and Research Hospital.Kenyatta lauded the partnership between the national and county governments to deliver health services to Kenyans.Citing the example of the cancer centre, the President emphasised that without cooperation between the two levels of government, there would be no significant development.

“This hospital is now able to provide services because we sat together with the governor who offered the land for us, as the national government, to put up the infrastructure and install modern equipment.

Data indicates that cancer is the third leading cause of death in Kenya after infectious and cardiovascular diseases.