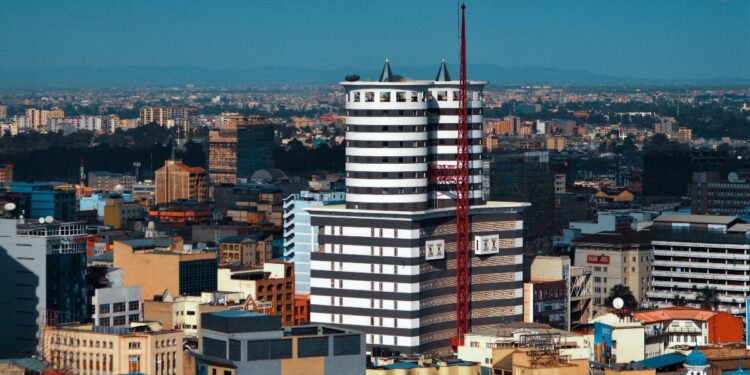 A view of Nairobi. Photo: Unsplash.

The average GDP growth rate for the three quarters in 2021 is 6.9 per cent

The Kenyan economy may continue its recovery trajectory with the projected GDP growth expected at a range of 4.3 per cent – 4.7 per cent.

A report by Cytonn Investments indicates that the growth will be on the back of gains made in 2021. Using data from the Kenya National Bureau of Statistics, the investment firm says the average GDP growth rate for the three quarters in 2021 is 6.9 per cent, an increase from the 0.8 per cent contraction recorded during a similar review period in 2020.  The average GDP growth rate for 2021 will be 5.9 per cent, significantly improving from the 0.3 per cent contraction witnessed in 2020.

The Cytonn 2022 Markets Outlook report said the continued recovery trajectory this year would be supported by several factors, among them, improved business recovery. According to Cytonn, there will be recovery of businesses from the adverse effects of the pandemic, owing partly to the continued reopening of external trading partners.

For instance, growth will also be supported by improved performance in the real estate and construction sectors. As per the report’s findings, the Kenyan government will continue to implement special infrastructural projects such as the Nairobi Expressway, to be completed in March 2022. Another project is the Western By-Pass.

The gradual increase in access to affordable credit will support the economy’s continued recovery. “As of October 2021, the private sector credit growth rate increased marginally to 7.8 per cent, from 7.7 per cent recorded in September 2021 according to the MPC’s October 2021 Report.”

The report noted that credit growth to the private sector might remain firm on the back of existing policy measures, including the MSMEs Credit Guarantee Scheme and continued economic recovery.

Given the improved Gross Non-Performing Loans Ratio in the third quarter of 2021 to 12.0 per cent, from 12.4 per cent in a similar period in 2020, the report said it expects to see banks gradually increase lending to the private sector on the back of an improved business environment. They, however, will remain cautious because of the elevated credit risk brought about by the emergence of new Covid-19 variants and compounded by the upcoming elections.

According to the report, the most significant risk to the growth of the Kenyan economy is the ongoing concerns on the sustainability of the country’s debt levels.  The firm noted that with the country’s debt to GDP ratio currently at 63.9 per cent, 13.9 per cent above the recommended IMF threshold of 50.0 per cent for developing countries, it is expected that the Kenyan government will have significant pressure to service the existing debt.

“A high level of debt reduces the prospects of economic growth as a large portion of revenues is used to service the existing debt as opposed to development expenditure.”

The emergence of new Covid-19 variants, such as Omicron, is also expected to be an ongoing risk.  According to the report’s findings, a resurgence of Covid-19 cases, mainly because of the emergence of new variants, could lead to the reinstatement of restrictions hampering the country’s economic growth.  For instance, the Omicron variant’s quick spread globally has led to logistical bottlenecks, thus exacerbating the ongoing supply chain disruptions and contributing to the global inflationary pressures.

The report also noted that the speed at which the vaccines shall reach the country and how fast they shall be distributed should also determine how fast the economy can get back to complete normalcy.  “The spread of Covid-19 variants in Kenya’s key trading partners has a direct effect on the economy as they lead to lower demand for the country’s exports while border closures lead to less movement affecting sectors such as transport and hospitality.”

The upcoming August general elections will also pose risks to the economy’s growth. According to the report, elections generally risk destabilising an economy should the resultant period be chaotic and unstable politically. The issue usually leads to a ripple effect whereby production decreases due to declined business activities. This also leads to low investor confidence in the country and consequently negative capital net flows.

It notes that erratic weather, including drought, makes it difficult for farmers to plan effectively, leading to under-supply of food products in the market.  “This leads to low production levels and hamper economic growth, as both exports and domestic sales decline.”

The firm noted that the elevated commodity prices are because of higher oil prices which might support growth in Nigeria and Angola. In contrast, high coffee and cotton prices will support near-term recovery in Kenya, Tanzania and Ethiopia.

The ongoing inoculation of Covid-19 vaccines coupled with ease of travel restrictions across the region might support the recovery of the tourism sector.  However, the investment firm noted that a possible emergence of Covid-19 variants such as Omicron and slow rollout of vaccines in the region is likely to weigh down on the pace of recovery.

“The forecast is higher than the initial 3.5 per cent projected, mainly reflecting the expected growth as economies rebound, on the back of ease of restrictions supporting exports and tourism and as such propelling growth.”