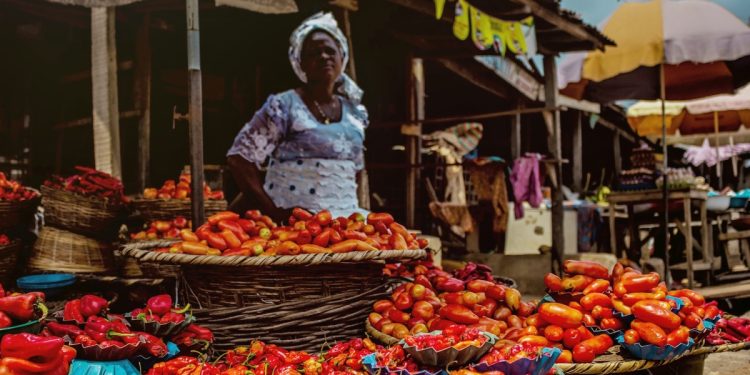 An African woman sells tomatoes at a market. Photo: Unsplash.

The grant will go into the country's Emergency Food Production Programme that targets an additional 600,000 of the most vulnerable groups in five states

The country received an $8.1 million grant from AfDB to fund its Emergency Food Production Programme.

Exacerbated by climate hazards, the threat of a food crisis has long loomed over South Sudan, which has not been food self-sufficient since 2009. Some 8.9 million people, over 70% of the population, including 4.6 million children, received humanitarian aid in 2022, 600,000 more people than in 2021, according to the World Food Programme.

AfDB noted that the threat of a food crisis has never been greater due to the impact of the war in Ukraine.

The bank said the Emergency Food Production Programme targets an additional 600,000 of the most vulnerable groups in five states, where recent severe flooding has affected hundreds of thousands of households and resulted in heavy crop and livestock losses.

According to AfDB, those who have received food aid in recent years – half of them are women – will get priority.

Commenting on the grant, Nnenna Nwabufo, the Bank’s Director General for East Africa, said the funds are a continuation of the performing AMVAT project, but with a focus on the emergency food crisis and disruption of supply of critical inputs for food production in South Sudan.

The project will boost agricultural production and productivity in these five states using improved seeds, fertiliser, and extension services for farmers and to strengthen the institutional capacity of the agricultural sector.

“To ensure that these measures are effective and sustainable, the project has provided for the training of thousands of farmers, nearly half of whom are women, on good agronomic practices and the right application of fertiliser,” said Themba Bhebhe, the Bank Group’s Country Manager for South Sudan.

Once completed, the project will lead to a sustainable increase in the country’s agricultural production and productivity, higher incomes, and improved quality of life for farmers. It will also help promote climate-smart agriculture and enhance the country’s food security.

To ensure continuity, implementation of the Emergency Food Production Programme has been entrusted to the UN Food and Agriculture Organization, which is already implementing the AMVAT Project.

As part of its efforts to help tackle food insecurity in Africa, which has been heightened by the war in Ukraine and the global surge in food prices, the African Development Bank Group launched the $1.5 billion African Emergency Food Production Facility on 20 May 2022.

The facility will provide some 20 million smallholder farmers across the continent with high-quality wheat, rice, maize and soya seeds and fertiliser, along with an array of technical support services. The objective is to produce an additional 38 million tonnes of food – worth USD 12 billion – in Africa over the next two years.

In a related story, Kenya will receive a €63 million/$63 million loan (KSh 7.5 billion) from AfDB to boost its cereals and oilseeds production by over 1.5 million metric tonnes over the next two years.

The loan is part of the African Development Bank’s $1.5 billion African Emergency Food Production Facility, an Africa-wide initiative to avert a looming food crisis exacerbated by the war in Ukraine.