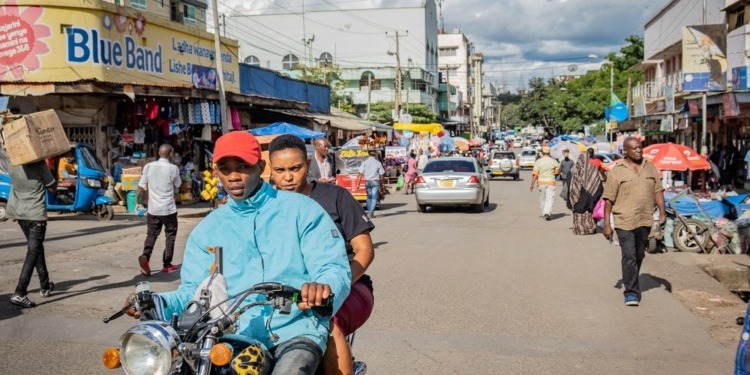 Economy in Tanzania: Photo by The New Humanitarian: The Exchange

The central bank of Tanzania forecast the economy to grow by 5.7 per cent in 2021, fueled by public investment and global trade.

Tanzania, one of the fast-growing economies across the African continent ascended to a low-middle income country status (LMIC) in 2020, amid COVID-19 pandemic shocks.

The achievements of the East African nation of more than 59 million people have been recognized across the world, with the World Bank (WB) taking note of the country’s success and throwing more than congrats to the table.

Amid uncertainties brought by the pandemic, threatening the livelihood of communities and the sustenance of investments, the central bank of Tanzania forecast the economy to grow by 5.7 per cent in 2021, fueled by public investment and normalization of global trade and investment.

Under the new administration guided by the sixth president, Samia Suluhu Hassan, Tanzania has already set its priorities and highlighted some of the key investment deals on the table, including the $3.5 billion East Africa Crude Oil Pipeline (EACOP) and the Tanzania-Kenya $1 billion gas pipeline deal.

Tanzania has also taken along the late President John Magufuli’s efforts on critical economic sectors, particularly on mining, as on July 7 the CEO of global mining giant Barrick Gold met with President Hassan to review the progress at the joint-venture, Twiga Minerals Corporation—which is a symbol of the new business relations between the two parties.

The World Bank report titled Raising the Bar: Achieving Tanzania’s Development Vision (March 2021), brought different arguments to the table, which serve to remind Tanzania to take the economic status upgrade as a reminder to assess the “quality of past growth in delivering broad welfare gains and to develop a roadmap to guide its further transition to a successful middle-income economy with a high level of human capital development, high-quality livelihood opportunities, and broad gains in living standards, as outlined in TDV 2025,”

The Tanzania Development Vision 2025 (TDV) points out the need to develop a competitive economy capable of producing sustainable growth and shared benefits, a current mission underway in the present administration.

However, the big question is, how can Tanzania achieve its aspirations sustainably? This brings WB into the picture as the report pins three strategic pillars to Tanzania’s plans which are: sustaining robust medium-term growth in a challenging external environment, improving the inclusiveness of growth and its impact on poverty reduction, and fostering upward economic mobility and strengthening economic security.

Further, the bank noted that the LMIC status is not “enough” as fuel for Tanzania to reach its top goals.  More “concerted efforts to restore the economy’s growth momentum from the COVID-19-induced slowdown” are needed while at the same time expanding access to economic opportunities.

As one of Tanzania’s close development partners, the WB entails that, with the careful note of strategic angles to explore Tanzania can navigate well towards realizing its TDV 2025 and eventually become a successful middle-income country (MIC).

Tanzania has managed to secure the trust of investors as it was seen to be “unpredictable” when it comes to doing business or, more to the point, on investment operations, due to tax and work permit uncertainties.

Hence, WB argued that private investment ought to be a driving factor of sustainable future growth, as Tanzania’s “experience of the previous two decades has shown”.

Further, the WB report highlighted that “the slowing of private investment growth in recent years and urges the government to accelerate current efforts to improve the business climate”.

On the other side of the line, having sound policies that are deliberately targeted towards the promotion of digital technologies uptake could cause an upsurge in attracting private investment and consequently boosting productivity, which leads to inclusive growth.

In that context, inclusive growth has not been an easily attained goal for Tanzania as critical issues such as high population growth (from more than 44 million in 2012 to over 59 million in 2021), slow and uneven job creation (2.16 per cent unemployment rate, National Bureau of Statistics), and limited access to educational and employment opportunities—especially for women and girls, “have hindered the inclusiveness of economic growth, blunting its effect on poverty reduction and the expansion of the middle class,” the WB noted.

However, the WB recommended five areas for Tanzania to work on based upon its “unique opportunities” and key lessons learned from successful LMIC.

By accelerating productive investment, Tanzania can achieve sound investment activities, as the highest priority reforms related to investor protection and retention, which include—managing the legal risks associated with transition away from investor-state dispute settlement and setting up a strong, transparent and accessible grievance redress mechanism that de-escalates investor concerns before they become disputes or exits.

As Tanzanians keep growing in numbers and new job creation issues emerge, the WB highlighted the second angle on prioritizing human capital development, through ensuring the development of access to basic education and health services for women and girls—which is a work in progress and could provide significant social and economic prospects.

Agriculture contributes almost 28 per cent to Tanzania’s GDP and is one of the largest employers (nearly 65 per cent – Statista), hence—the third angle the bank insisted on was on transforming agriculture to improve the value chain which impacts the transformation of other sectors.

By leveraging digital technology—which seems to be another key avenue Tanzania improves gradually, the digital economy benefits can be reaped as the digital divide hinders the attainment of inclusive growth, as underinvestment in ICT infrastructures, lack of open access policy, and limited capacity of the communications regulator is accounted to be constraints to private investment in the ICT sector.

The WB report ended with building institutions and capabilities as the fifth angle for Tanzania to work on for attaining its MIC status.

“The Tanzanian government has proved their commitment to macroeconomic stability, which needs to be maintained and strengthened while making further efforts to boost domestic revenue mobilization, improve the efficiency of public expenditures, and mobilize resources for development without jeopardizing fiscal sustainability,” the WB report argued.

Tanzania has set its plans towards attaining the best possible economic results in the next five years. With the current energy dedicated to setting up the right infrastructures, taxing systems, building a better investment environment and budgetary operations, Tanzania stands to attain the MIC level in no time.