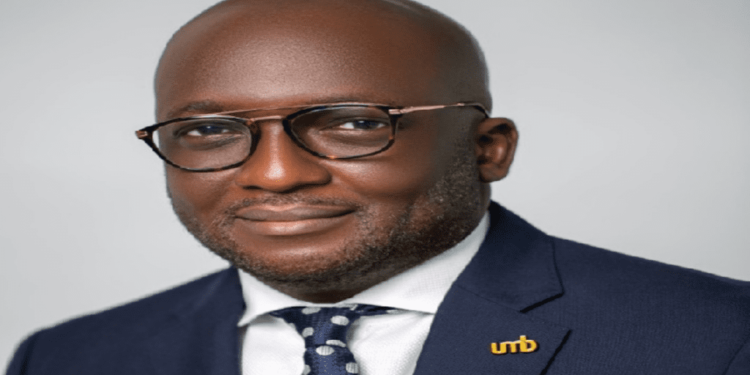 Benjamin Amenumey is now out after completing his 5-year tenure, and the Universal Merchant Bank (UMB) has a new Chief Executive Officer, Mr Nana Dwemoh Benneh.

But do you really know who Nana is? Well, Nana Dwemoh was on Monday, February 1, 2021 approved by UMB as its CEO following approval from the Bank of Ghana.

Prior to his appointment, Nana Dwemoh had worked briefly with Merchant Bank Limited after his graduate studies.

Board Chairman of UMB, Mr. Ras Boateng said the choice of Nana Dwemoh Benneh as the next CEO of UMB is a step in the right direction in propelling UMB to the next level of success. He also commended the outgoing CEO for his ability to lead and boost staff morale to give off their best.

While accepting the opportunity,  Nana Dwemoh said he was honoured and humbled to have been chosen by the Board to lead a strong legacy brand like UMB as its CEO.

He also promised to continue to build on the successes of his predecessors to forge a new frontier for posterity.

His predecessor Amenumey had already made several achievements during his tenure.

Since joining the bank in 2016, he has initiated and implemented many successful growth strategies with the Bank’s SME banking portfolio and in the Bank’s digital infrastructure including the introduction of its mobile banking application, the UMB SpeedApp.

Under his leadership, the bank attained its ISO 27001 and PCI DSS certifications, a testament to UMB’s continuous commitment to enhancing the experience of the customer with new and efficient banking technologies.

“Together, we have chalked many successes that have propelled our bank into the hallmark of the Ghanaian financial sector, thereby reaffirming our commitment to delivering unrivalled banking excellence to all our wonderful clients through our innovative products and services,” Mr Amenumey said while exiting.

Well, let us get to know the new CEO better.

He holds an Executive MBA from London Business School and a member of the International Academy of Retail Banking.

He obtained his first degree at the University of Ghana and later proceeded to London Business School for his master’s degree.

Nana Dwemoh Benneh joins UMB with a wealth of experience, having worked in various banking sectors.

He has local and international expertise in banking spanning over 15 years.

While with Barclays, he had the opportunity to work in various management roles across several countries in Africa and the UK.

Having led many dynamic teams across as head of retail for Barclays Uganda, he moved to Kenya as the East Africa Regional Sales Manager with oversight over Consumer sales machinery in the Banks East African businesses.

Subsequently, in 2003, Mr Dwemoh Benneh was appointed as director of the SME local business segment for Barclays Africa based in Johannesburg, South Africa with responsibility for the Banks SME strategy for Africa.

He returned in 2007 to Barclays Bank Ghana as the consumer banking director and is credited with consolidating the gains in the bank’s consumer banking business post the bank’s rapid expansion of the franchise that was undertaken between 2006 and 2007.

There he led the team in significantly growing market share and profitability for the Bank’s Personal and Business Banking franchise over the last seven years.

Nana Dwemoh throughout his career has demonstrated strong leadership and a commitment to excellence.

If well utilised, his wealth of experience will serve in the best interest of the bank in achieving its vision as a leader in providing strong financial solutions to its customers.

The outgoing CEO  noted that UMB accorded him the honour and pleasure of serving its customers with the very best of their financial offerings as an indigenous bank, and also allowed him build on the legacies of his predecessors for the next generation.

What is your thought about Mr Nana Dwemoh Benneh, who has just taken over from Benjamin Amenumey?