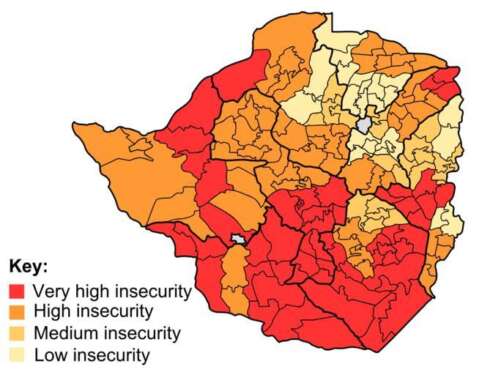 Zimbabwe is one of 10 countries where less than a fifth of children under the age of 23 months receive a diet that meets minimum adequate requirements.

by Evelyn Shumba
in Countries, Southern Africa
0
Share on FacebookShare on LinkedIn

Zimbabwe’s food security levels are quite low, but there is a promise of a better outcome from the previously anticipated situation. This is mainly because the country has received above-average levels of rainfall during the current rain season. There is hope that the expected bumper harvest will help bring resolution to the challenges of food insecurity.

However, there is still a need for food aid due to the deficit emanating from the two previous consecutive poor rainfall seasons experienced in most districts of Zimbabwe. The droughts resulted in poor harvests, which caused inadequate household food stock from personal production.

According to the report, estimates show that 4.3 million rural Zimbabweans are on the brink of a food deficiency crisis and need aid.

The report also says that Zimbabwe is one of 10 countries where less than a fifth of children under the age of 23 months receive a diet that meets minimum adequate requirements.

A 2019 survey showed that 25% of children under the age of 5 showed stunted growth, and were at very high risk of growth and cognitive development issues.

Nutrition forms a significant part of children’s developmental needs. The first few years of a child’s life form the backbone for the child’s brain development which is crucial later on in life. Given this situation, food insecurity poses a significant challenge for the future of the country.

According to the Zimbabwean Ministry of Agriculture, the country will produce 2.8 million tons of its staple crop – maize corn, giving a surplus of one million tons. The government has forecasted a required consumption of 1.8 million tons.

Despite the expected bumper harvest, most people around the country will require aid until harvesting. The prices of maize grain and maize meal are still relatively high and place them beyond the reach of many in rural and urban areas.

All things being equal, the forecasted harvest comes as a welcome relief. Successive droughts would have led the country to face a catastrophic food crisis of epic proportions. The already cash-strapped government would have indeed found it challenging to fund food imports and place reliance on donor aid, as has been the case over the previous years.

Impact of Covid-19 on food security

There are many other factors causing food insecurity, the most notable one at present is linked to COVID-19, the pandemic that has affected the whole world.

Lockdown measures taken to reduce the spread of COVID-19 have constrained access to food and income for most households. The year 2021 began with strict restrictions, which negatively affected the market-dependent informal traders. As of the beginning of March, the government has relaxed these restrictions and reopened the informal sector and intercity travel provided they observe recommended COVID-19 safety measures.

With the prohibitive cost of testing and sanitizing, the informal economy’s reopening poses a significant risk and will likely result in an increase in COVID-19 cases.

The national borders are yet to reopen to the general public except for essential goods and services.

The COVID-19 situation creates a catch-22 situation for the government. On the one hand, opening up the economy poses a health risk. With an already crippled health system, an increase in cases would burden the health system well beyond its capacity. On the other hand, the livelihoods of households have been severely crippled by the pandemic. With unemployment levels in the 90th percentile, the bulk of the population lives off informal trading in a hand-to-mouth scenario. Closing up the economy places a significant strain on their incomes.

The situation may continue to be challenging given the lack of resources the country faces. On the vaccination program, the government has received a batch of 200,000 units of the COVID-19 vaccine via a Chinese donation. The vaccine has begun to be administered starting with frontline health workers. Comparing this with a population of 14 million-plus based on Worldometer figures, the vaccination is indeed a drop in the ocean.

It hardly looks sufficient enough to achieve herd immunity. More significantly, given the fact that there is no data to ascertain the exact immune response post-vaccination and how the vaccine holds out to the variant from neighbors in South Africa, it may seem premature to celebrate. Also, there has been no mention as yet about the country receiving the COVAX vaccine. On the health front, the number of confirmed COVID-19 cases has decreased after a peak in positive cases and COVID-19 related deaths from the end of December 2020 to the first weeks of January 2021. The rise was mainly driven by citizens returning home for the Christmas holidays and the relaxation of lockdown measures in the last quarter of 2020.

Balancing out the pandemic and food security issues will continue to haunt the government.

The economy and food security

Another factor that has exacerbated Zimbabwe’s food security situation is its moribund economy. According to the Zimbabwe National Statistics Agency (ZimStat), in January 2021, the year-on-year inflation rate measured by all items blended under the consumer price index stood at 192%. This high inflation rate has adversely affected disposable income, with many of the country’s labour force earning far below the poverty datum line. ZimStat also released information that an ordinary family of five now requires an average of ZWD24,935 to cover its monthly expenses up from ZWD22,000 in 2020. This shows that the cost of living in Zimbabwe is continuing to rise.

The parallel market exchange rate is also depreciating quickly, thereby affecting the masses because most goods and services are priced in the US dollar.

The introduction of the government’s US dollar auction system in June 2020 has helped slow down the skyrocketing parallel market rate. However, low levels of disposable income continue to plague households.

The food security situation in Zimbabwe remains precarious. Erratic weather patterns and a deteriorating economy contribute to a simmering food security crisis. The situation has further been compounded by the COVID-19 pandemic. The good rains received during the current rainfall season, have brought a welcome sigh of relief which, ceteris paribus, will go a long way in alleviating the growing food crises that the country faces.