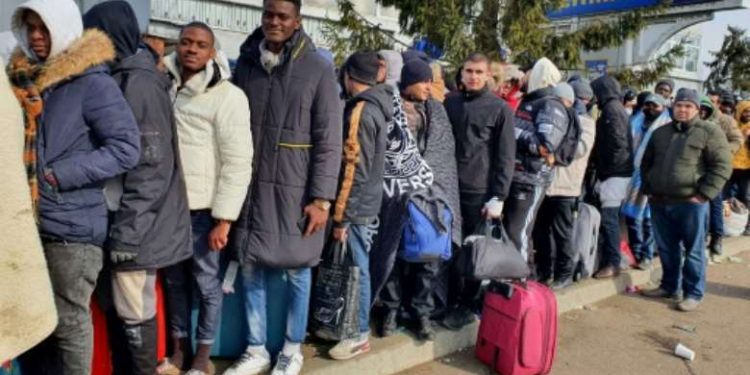 Africans fleeing the Russian-Ukraine war. France has created a new initiative to help African students fleeing Ukraine to enable them study in a French university.

France has created a new initiative to help some of the African students from Ukraine to enable them to follow the same course they were studying in Ukraine but in a French university.

by Kester Kenn Klomegah
in Countries
0

Under a new educational initiative, the French government will help African students escaping from the Russia-Ukraine crisis by offering them admissions into French educational institutions in France.

Many African students have left because their academic studies were abruptly disrupted due to Russia’s special military operation aims at demilitarization and denazification in the former Soviet republic of Ukraine.

Both are independent sovereign republics after the collapse of the Soviet era. In order to raise its status, Ukraine has been attempting to the North Atlantic Treaty Organization and the European Union. These steps angered Russia.

Over the past few years, many African, Asia and Latin American students are attracted to the system of education primarily due to comparatively affordable study tuition. According to the Ministry of Education, thousands of students also arrived from different African countries. Morocco has the highest 8,000 students and followed by Nigeria, Egypt and South Africa.

Now, France has created a new initiative to help some of these Africans from Ukraine. The idea is to enable them to follow the same course they were studying in Ukraine but in a French university. For a start, 300 African students have applied to take part in the scheme.

The Presidential Council for Africa (PCA), founded by President Emmanuel Macron in 2017, is driving this project. Its coordinator, Wilfrid Lauriano do Rego, told RFI that each student’s case will be examined separately.

“Each student presents a different case depending on whether they would like to continue studying in France or not and whether French universities can take them. And we also need to liaise with the French authorities to make this project feasible,” he said.

The initiative is not limited to francophone students but is open to anglophone students too, depending on how fluent they are in French. The project concerns all university courses but may be limited to what is on offer within the French universities participating in this initiative.

“It will also depend on what kind, of course, they are following and the decisions of the French universities giving these courses on the matter,” he said.

Three hundred African students have, so far, enrolled in the PCA’s initiative. Lauriano do Rego said that he doesn’t know, at present, if they can accommodate more students as it depends on the student’s achievements.

“We will also have to see whether the curriculum followed in Ukraine is available here and what facilities are available to welcome them here in France. Each application would be considered on a case-by-case basis. We will see how it goes with the students and some of the universities as a sort of test drive for this project,” Lauriano do Rego explained.

The French Foreign Affairs and Interior ministry will deal with the administrative side including documents for African escapees, majority of had experienced and suffered all kinds of blatant discrimination while crossing borders to safety.

These students, estimated to be 16,000, have reported horrendous experiences in dealing with the Ukrainian authorities where the official policy is to prioritize the safe passage of Ukrainian women and children out of the country.

Reports indicated that most of these students managed, despite the difficulties, to arrive in neighbouring Poland, Hungary, Bulgaria and Romania. Those from Eastern Ukraine were refused entry into Russia.

Similar to the initiative adopted in France, a number of neighbouring countries have also offered to admit African students into their educational institutions. Hungary has accepted about 120 students from the Republic of Ghana. Bulgaria and Romania took Nigerians and other African nationals.

Nonetheless, several African governments issued a statement protesting the treatment of their nationals living and attempting to leave Ukraine in the aftermath of Russia’s special military operation began on February 24. At the UN General Assembly, Africa was divided with their votes, afraid of contradictions and confrontations posed by the Russia-Ukraine crisis and its effects on diplomatic relations.

It further said they had been particularly disturbed by reports that African citizens on the Ukrainian side of the border were refused the right to cross the border to safety.

Reports that Africans were singled out for unacceptable dissimilar treatment was shockingly racial discrimination and in breach of international law. In this regard, The Chairpersons urge all countries to respect international law and show the same empathy and support to all people fleeing war notwithstanding their racial identity.