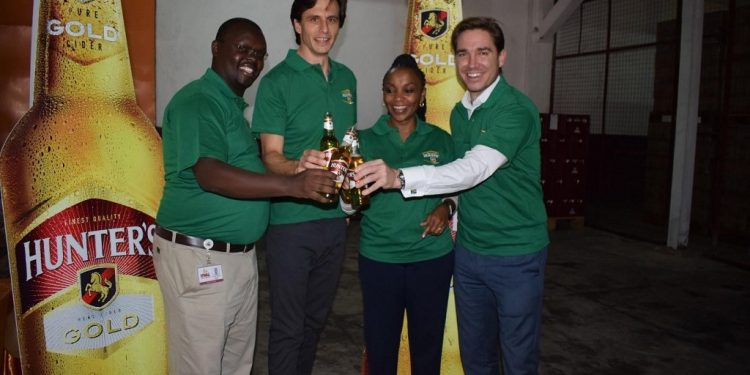 KWAL Managing Director Lina Githuka with Supply Chain Director Mwenda Kageenu, Robert Bajner and Board of Director member Chris Lombard. KWAL has started a production line of the Hunters Gold Cider targeting to control 50 per cent of the cider market in Kenya. [Photo/KWAL]

by Njenga Hakeenah
in Kenya, Manufacturing
0
Share on FacebookShare on LinkedIn

Alcoholic drinks are among the most counterfeited goods in Kenya coming only second to mobile phones.

Kenya’s porous borders are largely to blame for this problem which is risking the lives of innocent consumers who may suffer the side effects of the counterfeited products.

KBL hailed this as the first cider to be produced in the country marking the Tusker brand expansion which includes Tusker Lite, Tusker Lager and Tusker Malt.

And in May 2019, KWAL launched a new production line for the local manufacture of ciders in the company premises on Enterprise road.

This, according to KWAL followed Kenya’s shifting trends in 2018 on alcohol consumption influenced by a huge move to cider preference.

Kenyans consumed an estimated 9 million litres of ciders in 2018 causing an 8.5 per cent and 8.1 per cent decline in the beers and mixed drinks segment respectively.

According to the Euromonitor’s Cider/Perry report on Kenya, manufacturers and retailers of cider/perry rely on heavy marketing and promotion to realise sales.

“This is because generally in Kenya, cider is positioned as a drink for women; even so, most women would prefer to drink beer or spirits.”

The report indicates that consumers in Kenya mostly drink beer or spirits.

“It is only expected to be a matter of time before consumers demand hard cider, which is cider combined with spirits,” adds the report.

The leading brands in the cider/perry segment in 2017 were imports of Hunter’s and Savanna Premium Dry Cider from South Africa.

These brands are imported through local distributors such as Distell Group and C&C Polaken.

The launch of the cider production line comes at a time when KWAL is celebrating 50 years in the alcohol manufacturing business.

“As we celebrate 50 years of being in business, our focus is on business expansion as well as growth in market share across all the products in our portfolio. The cider production line will initially focus on Hunters Gold which is currently Africa’s largest-selling cider,” said KWAL Managing Director Lina Githuka.

She added, “This project has been in the making for the past one and a half years and we do anticipate that it will be a game changer for KWAL in the market.”

With the launch, Githuka said that they are targeting to control 50 per cent of the cider and mixed drinks segment by the end of the year.

“We plan to do this by taking advantage of our wide distributor network as well as use of third party listing agencies to supplement the sales team.”

KWAL was established in 1969 as a State Corporation and after Centum sold its shares to Distell in 2016, Distell became the largest shareholder with 52 per cent ownership.

Penetrating the cider market in Kenya

Euromonitor says that a bottle of cider retails at a significantly lower price than a glass of wine.

“Increasingly, cider is being viewed as a sociable drink that can be enjoyed either socially or with food.”

For KBL, introducing new alcoholic brands in the region in the past few years is a way of seeking to grow and diversify its product portfolio.

The Kenyan alcoholic drinks market is witnessing the growth of sophisticated products and increasingly diverse drinks by the entry of new players including distributors of global liquor manufacturers.

KWAL is seeking to get the lion’s share in this segment.

Last year, KBL launched the Tusker Premium Cider can format for a “wider variety and more convenience with the new packaging”.

Innovation brands have significantly contributed to KBL’s business growth in the last financial year with expectations to double their contribution in the next 2 years.

How well KWAL conquers the nascent Kenyan cider market remains to be seen especially since Distell which owns Hunters Gold is well known in Africa.

Ilicit trade accounts for USD6.48b loss to the Kenyan economy with government statistics indicating that it loses over KShs200 billion (USD2 billion) annually as potential income.

In 2017, a plant bottling counterfeit alcohol was raided and over 50,000 litres of fake spirits worth KShs40 million in street value, were seized.

According to Kenya’s Anti Counterfeit Authority (ACA) information, the ‘factory’ at a Home in Laare, Meru was arranged in a production line system.

Officers seized all the production line apparatus, mixing tank, and containers, along with packaging, bottles and labels which were all counterfeit.

The officers also recovered 11 Rolls of 25000 pieces KRA Stamps worth 27 Million during the crackdown.

Also recovered were 10 drums of Industrial chemical ethyl used in making the alcohol.

This comes as the long-stretch porous borders mainly along the Kenya-Tanzania and the Uganda border continues to be blamed for entry of contrabands.

Fast-Moving Consumer Goods (FMCG) are the most counterfeited products.

A government study has revealed mobile phones are the most counterfeited at a rate of 51.8 per cent.

This is followed by alcohol and beverages (30.8 per cent).  DVDs/CDs, bottled drinking water and pharmaceuticals add up to make the top five most counterfeited products.

Other products are detergents, food products, electrical gadgets, perfumes and cosmetics, cigarettes and computers (both software and hardware).