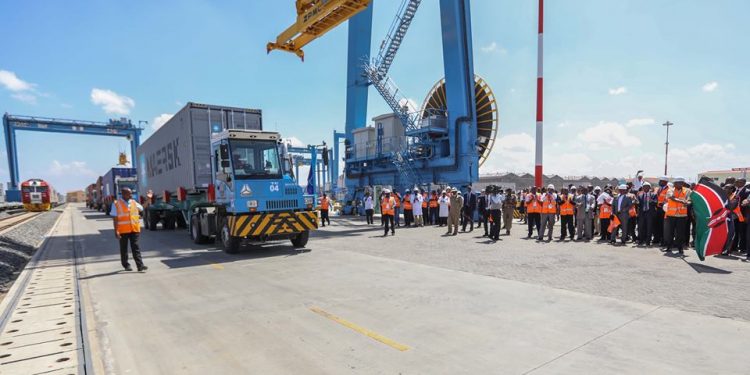 President Uhuru Kenyatta flags off cargo during the launch of the upgraded Nairobi ICD in December 2017.

How Kenya plans to curb tax cheats on import, exports of consolidated cargo

The Kenyan government has now resorted to vetting of importers and exporters of consolidated cargo in the latest move to curb tax evasion.

This comes in the wake of recent piling of cargo at the Nairobi Inland Container Deport (ICD) as authorities opted for 100 per cent verification on containers with consolidated goods.

This is on suspicion of under-declaration and misdeclaration by traders in a tax evasion racket that has been denying the government revenues amounting to billions of shillings.

Rogue state officials have been accused of colluding with unscrupulous traders to facilitate false declarations, denying the Kenya Revenue Authority (KRA) requisite taxes, such as import duty, a move said to have led to a loss of over Ksh100 billion(US$987.8million) in the recent past.

They are also said to allow in counterfeits into the market and through the transit route into the hinterland in exchange for kickbacks.

The verification process has led to delays in cargo clearance at the ICD which has been receiving large consignments of goods in the wake of increased haulage by the Standard Gauge Railway (SGR).

READ:Governments side: Small traders’ tug-of-war with KPA to release consignments

Speaking during a stakeholders meeting at the ICD in Embakasi, Nairobi, President Uhuru Kenyatta faulted the consolidators for contributing to the delays in the clearance of containers at the facility.

The President said the government will vet and register all import and export cargo consolidators to root out tax evaders.

“We have found out that some problems are caused by individuals who do consolidation. They bring goods in containers claiming they are transit goods to Uganda and South Sudan while their real motive is to evade paying tax. That is not right and we will not allow it,” President Kenyatta said.

“All consolidators must now be vetted by KRA, they must be gazzetted and only those shall be allowed to do business so that we ensure we have trustworthy people who will not try to avade taxes,” he added.

He said the government will not tolerate those using short-cuts to import or export cargo from within or through the country.

“We must ensure we have people who are genuine. They import , pay taxes and clearance is done much faster so that people continue with business. That is what we call a win-win,” Kenyatta added.

The vetting process is expected to be concluded in the next three weeks.

The Standard Gauge Railways freight services kicked off on December 1, 2017.

To lure importers from road transport, which has been heavily relied on for years, the government extended discounted rates of US$425 Per TEU (20ft-container) and US$700 for a 40 foot container.

Kenya Railways (KR) has also entered into a number of agreements with some shipping lines, which are aligned towards the use of the SGR to move cargo from Mombasa Port at the Kenyan Coast to the Nairobi ICD, before being delivered to their end destinations in the city, other parts of the country or shipped to neighbouring countries.

The Mombasa-Nairobi SGR which has both freight and passenger services is being operated by Africa Star Railway Operation Company, a subsidiary of China Road and Bridge Corporation which is overseeing the overall operations of the multi-billion infrastructure.

About 14 freight trains are operated daily with an average daily shipment of more than 1,100 TEUs, hauling containers and steel rolls, according to the company’s General Manager Li Jiuping.

Since January 2018, railway container transportation has increased month by month.

On November 21, 2018, a record 28 freight trains were operated on a single day. 663 trains for grain, fertilizer, steel and other bulk cargo were dispatched.

The President who paid a second visit to the ICD in a span of two days has assured small scale traders that their goods will be cleared on time once they adhere to the laid down procedures.

“Many times our traders operate without knowledge of the government procedures and we would like all boardroom decisions disseminated to the traders,” President Kenyatta said.

In addition to tax evasion by consolidators, the President has warned importers against counterfeits, saying the government will not relent in its efforts to stem out the importation of counterfeit goods into the country.

The Head of State said counterfeits were a major hindrance to the development of the local manufacturing sector, thereby denying millions of young Kenyans employment opportunities.

They are also detrimental to the country’s manufacturing sector which is a key pillar in President Kenyatta’s Big Four Agenda.

The government is keen to raise manufacturing sectors’ contribution to GDP from 8.5 per cent  to 15 per cent under the Big 4 plan which also encompasses food security, universal healthcare and affordable housing.

During the meeting which involved stakeholders from the private sector, it was established that the delay in the clearing and release of the close to 1,000 containers was largely due to insufficient paperwork including cargo that is destined for the local market, which had been declared as export goods by deceitful importers in attempts to evade paying requisite taxes.

As a way forward, the meeting which also brought together all state and non state agencies operating at the terminal resolved to have the containers processed and released to the owners in the next two to three weeks.

The meeting also agreed to institute reform measures that will reduce cargo clearance period at the depot to a maximum of four days.

Last Sunday, the President made an impromptu visit to the ICD.

He was accompanied by Interior CS Fred Matiang’i, his Principal Secretary Karanja Kibicho and the unit heads of the multi-agency team leading the crackdown on counterfeight goods in the country.

According to the Presidential Strategic Communications Unit (PSCU), the Head of State’s  keen focus on the facility has been prompted by growing complaints by importers, some of whom had reached to him directly, of delays in the processing and release of cargo at the terminal.