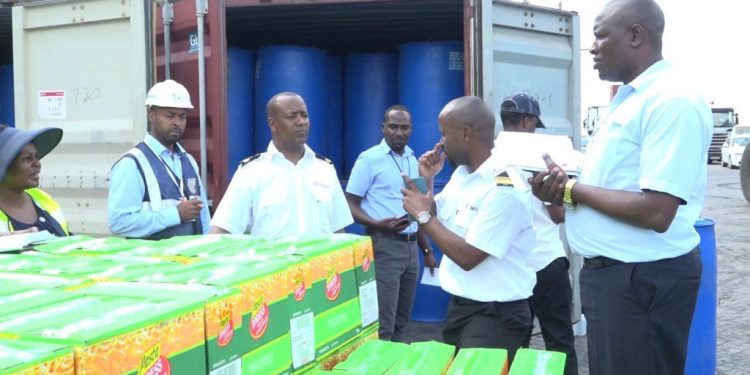 by Chacha Mwita
in Crime, Kenya
0
Share on FacebookShare on LinkedIn

Barely a month after intercepting a consignment of contrabands and illegal imports at the Port of Mombasa, Kenyan authorities have yet again seized another multi-million shipment by rogue importers in Kenya.

Kenya Revenue Authority (KRA) seized 144 drums of imported Ethanol at the Port of Mombasa, which had been mis-declared as 1,000 bags of cement.

Customs officers have also seized another high end motor-vehicle, a Range Rover Sports suspected to have been stolen from the United Kingdom which had been mis-declared as second hand window frames, doors, folding chairs, stools and wall pictures.

The Ethanol was imported in two by twenty feet containers while the vehicle was in a twenty-foot container. The two were intercepted following intelligence reports; they were scanned through KRA’s non-intrusive scanners and the images showed inconsistency with what had been manifested.

A multi-agency team lead by KRA undertook 100 per cent verification on the consignment and confirmed that the three containers were indeed carrying 28,800 litres of concealed ethanol and a Range Rover.

The drums with a capacity of 200 litters each were concealed in 285 boxes of spaghetti at the entrance of the containers to prevent the law enforcers from detecting the ethanol.

“The mode of concealment is similar to that of four twenty-foot containers recently intercepted at the inland container depot (ICD) in Nairobi, with a uniform item stacked in the first two columns and the rest of the container conveying cargo in drums,” KRA Commissioner, Customs and Border Control, Kevin Safari said.

The importation of ethanol is restricted with only licensed firms and dealers being allowed to import the product to reduce the manufacturing of illicit alcohol in Kenya.

READ ALSO:This is what alcohol manufacturers in Kenya want

Ethanol attracts and excise duty rate of Ksh6million (US$58,519) per 20-foot container and had the smugglers succeeded, the authority could have lost at least Ksh12 million (US$117,038) in taxes.

According to the manifest, the consignor for the high-end vehicle is in Dubai, UAE while the consignee is in Kampala, Uganda. The vehicles country of origin is the United Kingdom.

Last month, Kenyan authorities unearthed an international car smuggling racket targeting the East Africa region, one in many that have been busted in recent times.

Why most SMEs die after founder’s exit, way forward