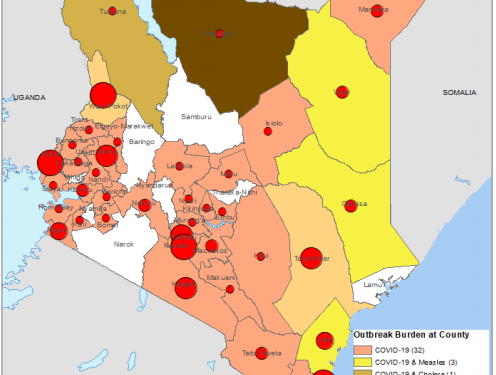 When a risk assessment was conducted in the country with the support of the World Health Organization (WHO), a total of 22 counties were identified as being at very high risk of these diseases.

Kenya remains at constant threat of measles and rubella outbreaks even at a time when the effects of Covid-19 crisis are being felt.   According to Health Chief Administrative Secretary, Dr. Mercy Mwangangi, Kenya has witnessed a series of outbreaks in several counties, among them Mandera, Wajir, Garissa, Westpokot and Tana River, over the last one year.

Caused by viruses, measles and rubella are highly infectious. Measles specifically, is the third most common cause of death among children from vaccine preventable diseases.

“Deaths are mainly due to complications – severe diarrhoea, pneumonia, ear infections (Otitis – media) with sometimes presence of pus from the ears, brain damage and blindness,” said Dr. Mwangangi. Rubella is also very highly infectious and can cause complications to new-borns such as birth defects.  There is no available treatment for measles and rubella, however, disease management with good nutrition and rehydration is purely supportive to prevent complications. 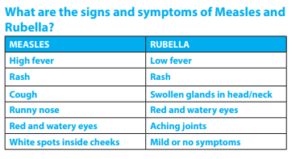 In Kenya, about 2.1 million children are susceptible to the two diseases and the country has heightened its guard to combat the outbreaks before they wreck further havoc within its citizens.

According to Dr. Mwangagi, the ongoing fight against Covid-19 outbreak has particularly made it difficult to handle other emerging outbreaks given the measures put in place to slow down the spread of the global pandemic.

When a risk assessment was conducted in the country with the support of the World Health Organization (WHO), a total of 22 counties were identified as being at very high risk of these diseases.

As the vaccine campaign continues, the country is still on high alert to ensure that the health workers as well as the beneficiaries of the vaccines are not exposed to the coronavirus.

“As such, ALL the requisite Covid-19 guidelines will be observed during the vaccination campaign. The vaccination campaign will utilize vaccines which are in use in the routine immunization program and that are procured by the government of Kenya and will be delivered by trained personnel through the existing health infrastructure.” Dr. Mwangangi says.

Data from the WHO shows that during 2000-2015, measles vaccination prevented an estimated 20.3 million deaths making measles vaccine one of the best buys in public health.

Just last year, Congo reported a total of 6000 deaths from measles outbreak. This is the reason the government has partnered with several partners to ensure that the vaccine targets are achieved and check the spread of the virus. So far the government has set aside a total of KSh800 million ($8 million) to see this through.

Some of the partners playing a significant role in putting the measles and rubella pandemic under control include the European Civil Protection and Humanitarian Aid Operations, the Vaccine Alliance, Gavi, Médecins du Monde, Médecins Sans Frontières, United Nations Children’s Fund, WHO among others.

As at 8th of June last year, measles outbreak was active in five counties namely West Pokot, Garissa, Wajir, Tana River and Kilifi with a total cases reported at 382 and 48 confirmed cases with two deaths. The figures kept going up given the country was then battling the Covid-19 pandemic and not much could be done to curb this outbreak.

WHO has vowed to support the fight against such preventable outbreaks and ensure that timely diagnosis of both measles and rubella is coordinated to reduce the spread and at the same time stop fresh infections.