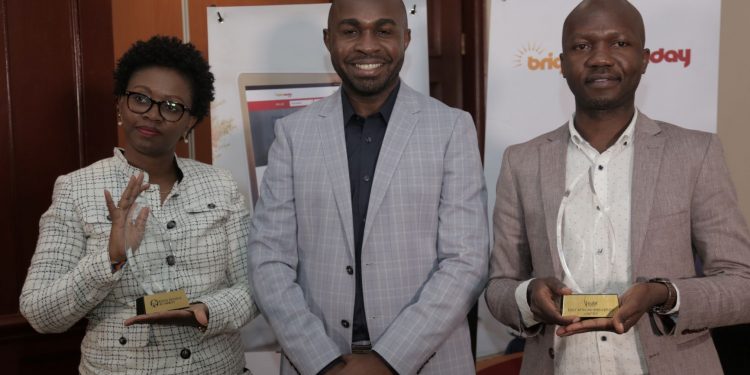 (from Left) Kenya Revenue Authority Recruitment Manager Ruth Nyamoko, BrighterMonday Chief Executive Officer Emmanuel Mutuma and Head of Talent Engagement, EABL Nicholas Kasidhi during the unveil of the best 100 companies to work for in Kenya report by BrighterMonday. Out of the companies surveyed, KRA was position 5 while EABL came second. Mobile telecom company Safaricom emerged as the best company to work for as well as the most ‘desired’, and ‘respected’ brand.

Majority of Kenya’s job-seekers dream of working at Safaricom

by Kimani Chege
in Kenya, Small Business
0
Share on FacebookShare on LinkedIn

A new survey released by the talent recruitment agency BrighterMonday has revealed major companies that Kenyans aspire to work for while also revealing key details of the employment spectrum in the country. In the survey, Safaricom was ranked as the top company that job seekers would love to work for with the majority of respondents attributing the working environment and remuneration as key indicators.

A total of 3,448 valid responses puts Safaricom in the top spot as the number one best company to work
for as well as the most ‘desired’, and ‘respected’ brand. Other companies in the top 5 include East African Breweries, United Nations (UN), Kenya Commercial Bank (KCB) and Kenya Revenue Authority (KRA).

Speaking during the launch of the report, BrighterMonday Chief Executive Officer Emmanuel Mutuma revealed that Kenyans were not entirely happy with their current work situations, with most willing to switch jobs.

“Respondents aged between 25-35 are the happiest age group at work, followed by 18-24; however, both age groups posed a high flight risk. The oldest age group is the least happy group but not willing to leave their current employer. In Kenya, employees are most satisfied when they can relate to a company’s vision, have full transparency with management and have flexibility in the execution of their tasks.”

Adding, “In Kenya, employees are most satisfied when they can relate to a company’s vision, have full transparency with management and have flexibility in the execution of their tasks. A company is only as good as its staff on any given day, so ensuring your staff are happy and satisfied not only increases your company’s productivity but your company’s reputation as well.”

The report surveyed a total of 3,448 valid responses following internal audiences made up of employees working at numerous companies in Kenya and external surveys that targeted the general public. The majority of the respondents were aged between 25-35 and 18-24, live in Nairobi and hold a Bachelor’s degree.

In the report, many youths were revealed to be more entrepreneurial and felt that mentorship and coaching were integral to their career growth. This is despite them being considered a flight risk in search of greener pastures. Another key insight is that the gender pay gap still exists and this is affecting the satisfaction levels amongst women in the workplace, who feel less valued and more likely to switch jobs.

“Younger respondents are also the most entrepreneurial group, which could be inspired by the search for diversification of multiple income streams. The youngest groups turned to mentorship and coaching since they’re still fresh in the workplace. On the flip side, 50 percent of women were happy to leave their current employer because they felt that the workplace is not conducive for them as they don’t feel valued or their employers do not meet their desired traits, or they simply leave for greener pastures, for example, higher salaries

BrighterMonday was established in Kenya in 2006 and wants to transform productivity in Kenya.

How D.R. Congo will change its road network using nanotechnology

What to look out for as the Premier League returns