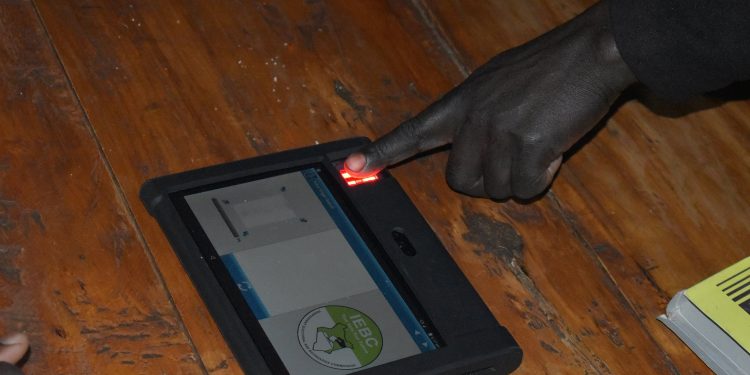 A voter places their finger for biometric identification on the KIEMS kit. Kenya's 2022 election was hailed as a success after deploying technology similar to blockchain in relaying results. [Photo/IEBC]

Kenyans held national elections in a voting system that closely mirrored the Bitcoin blockchain which has saved Kenya from what is usual in many African elections- massive vote rigging.

Four years ago, and a year after the nullification of the 2017 election in Kenya, the electoral commission said that technology would be employed to allow presidential candidates to access election results safely.

This, apparently, was in order to increase transparency and lessen perceptions of opacity. To this end, the East African nation worked towards employing blockchain technology to offer real-time results which could not be interfered with at any point. Generally, cryptocurrency transactions are verified and recorded using distributed-ledger technology, a blockchain.

True to his word, the Independent Electoral and Boundaries Commission (IEBC) Chair Wafula Chebukati has emerged victorious from an all-front attack on the commission he chairs and where his mandate was to announce Kenya’s fifth president.

On Tuesday, August 9, 2022, Kenyans held national elections in a voting system that closely mirrored the Bitcoin blockchain. This technology has saved Kenya from what is usual in many African elections- massive vote rigging.

Despite Raila Odinga, one of the contenders disputing the election results, observers from within and outside Kenya were pleased with the process.

East Africa’s investment hub’s democracy has grown, and most African countries now look to Kenya for governance models. Women leadership was a major focus of the recently concluded exercise.

The voter identification system was encrypted from the beginning to the end. The biometrics of voters were protected by a specially designed election management system. To vote, a registered voter had to be verified by an electronic device linked to the Kenya Integrated Election Management System (KIEMS) after presenting their National ID or passport.

The KIEMS scans the voter’s fingerprint and displays the voter’s information in accordance with the Electronic Voter Identification (EVID) system.

Following successful verification, the Presiding Officer allows the voter to cast their vote by marking their preferred candidate on the ballot papers in the six elective seats.

Only 190,000 (1.3%) of the 14.2 million voters who cast ballots were manually identified. This was due to poor internet connectivity in some areas and distorted fingerprints of some voters.

A clerk stamps the voter’s index finger with indelible ink as proof of voting. The Presiding Officer (PO) then counts the votes per ballot box after the polls close at 5 p.m.

The procedure is carried out in the presence of observers, agents, clerks, and members of the media.

When the presidential tally (form 34A) is finished, the PO scans it and sends it to the IEBC tallying centre.

The public and members of the fourth estate were present during the counting. External organisations such as the BBC, Reuters, and the Elections Observation Group (ELOG) also tallied the transmitted election forms on the IEBC portal.

The use of technology in the IEBC verification process

For each form 34A to reach the National Tallying Centre (NTC), the tallied vote figures had to match the data of voters scanned by the KIEMS kit. The kit eliminated any possibility of voter impersonation.

Role of blockchain in Kenya’s election process in 2027

As previously stated, the voting system is primarily electronic. The manual portion includes the distribution of ballot papers to voters and the counting and verification of polling station forms.

The more hands that hold the electoral material, the greater the volume of distrust that afflicts African elections.

The system is still under investigation, despite the fact that the country’s literacy rate remains high, at 81.54 per cent, according to Country Economy.

Blockchain adoption will be a significant step toward eradicating election outcome disputes which characterise most African elections.