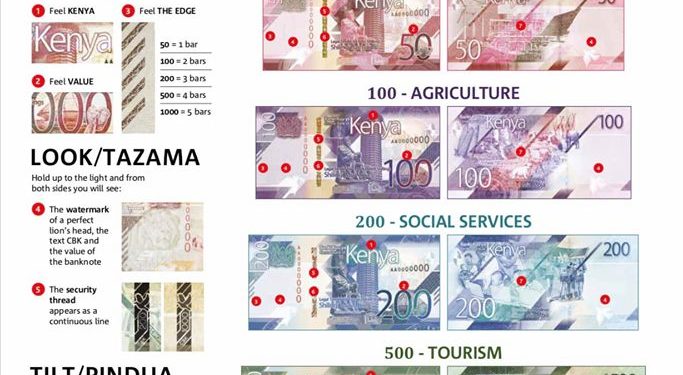 Kenya’s move to introduce new currency felt in the region

Kenya is not the first or the only country to apply demonetization in efforts to combat fraudulent money and IFFs. Zimbabwe and India are some of the countries which have been on this same path albeit without much success.

by Mary Wangari
in Africa's Development, Countries, Kenya
0
Share on FacebookShare on LinkedIn

On June, 7th 2019, the Tanzanian government suspended the conversion as well as the extradition of Kenyan bank notes in a bid to combat counterfeited money.

“CBK has suspended currency conversion and repatriation of all Kenyan currency to restrict illicit financial flows and counterfeits into the Republic of Kenya, and will not accept Kenyan currency with immediate effect,” read the official statement.

The Bank of Tanzania also received a directive to immediately freeze the Currency Collection Account of the CBK even as the government amplifies efforts to stop illicit financial flows (IFF) in the country.

The increase in cases of money laundering and other forms of corruption in the recent times countrywide has reached an alarming level. It therefore came as a great relief when the CBK issued new currency series effective 31st May 2019. This was followed by an official unveiling by President Uhuru Kenyatta during Madaraka Day celebrations on 1st June 2019.

“Gazette Notice No. 4849 of May 31, 2019, all the older Ksh1,000 banknotes shall be withdrawn and will cease to be legal tender on October 1, 2019. All other denominations are unaffected and will continue to circulate alongside the New Generation banknotes,” said a statement by CBK.

According to the statement, the main objective of the drastic measure was aimed at dealing thoroughly with the emerging issue regarding an increase in IFF as well as fraudulent cash in the country.

The move could not have come at a better time considering that Kenya was ranked position 27 among the most corrupt countries by a survey carried out in 2018 by the Transparency International’s Corruption Perceptions Index which is an anti-corruption watchdog.

It is not all gloom as undoubtedly President Uhuru has taken the fight against all forms of corruption a notch higher like never before in the history of this country.

Firstly the Head of State has being most vocal against graft in almost all public gatherings and has also made some notable appointments of top officials. For instance, in August 21, 2018, the president appointed the new Director of Public Prosecution (DPP) Noordin Mohamed Haji a move that clearly showed he was really down to business in the fight against corruption.

“I have conveyed to the National Assembly the nomination for vetting and approval of Paul Kihara Kariuki as the Attorney General and Noordin Mohamed Haji as the Director of Public Prosecutions,” president Uhuru announced through his Twitter account.

This has been followed by a rather radical move which has seen the apprehension and court proceedings against high profile figures for instance Deputy Chief Justice Philomena Mwilu and other county governors linked to graft scandals.

With such remarkable efforts, the issue of IFF has remained a deep rooted concern which has left policy makers scratching their heads looking for ways to bury it once and for all. The fight against IFF in Kenya has been quite a challenge considering it is carried out.

Outspoken and flamboyant city lawyer Ahmednasir Abdullahi, who specializes in corporate, commercial and tax law, opened a pandora’s box when he divulged that bilateral infrastructure agreements which have been taking place between Kenya and Chinese governments had given way to corrupt financial transactions such as payments.

Government stand on war against corruption

The controversial lawyer went on to reveal that physical cash currency is ferried into the country as ‘cargo’ and finds its way as unregulated economy in Kenya. Although the Senior Counsel did not reveal the origin of the cash money, according to his argument it could be traced to the Nairobi’s property boom as the rest of the Kenya’s economy strives to remain afloat.

Following his daunting revelation, a number of fraudulent money cases have been popping out recently in media news. Late last year in October, some Chinese nationals were on the spot in relation to operation a money laundering syndicate in the country in alliance with Kenyans.

The scam reportedly would use credit cards to purchase goods and services which are non-existent from clueless Kenyans. In the same period, October 2018, the Kenya Revenue Authority was taken to court by a Chinese firm for freezing their bank accounts after the latter evaded tax amounting to over Ksh 2.2 million ($21,683) between 2015 and 2017. The company used seven other firms to conceal their financial dealings aimed at avoiding their tax obligations as revealed by KRA.

Efforts by the government to combat IFFs from within the country and from other countries such as China have been commendable so far. Undoubtedly, the government is determined to fight graft in all fronts. Several buildings which were constructed through illegal permits have also been demolished which proves the government’s unwavering stand against corruption.

Kenya is not the first or the only country to apply demonetization in efforts to combat fraudulent money and IFFs. Zimbabwe and India are some of the countries which have been on this same path albeit without much success.

The move by the government to carry out demonetization should be taken with a pinch of salt to avoid similar pitfalls and hopefully for the rigorous efforts to ultimately bear fruits.

That said, there is still more to be done including strengthening mechanisms for regulatory and enforcement as recommended by Sigal Mandelker, the US Under Secretary for Terrorism and Financial Intelligence in June 2018.

In addition, stringent measures are needed to fortify policies against transactional crimes. This can be achieved through enforcing laws as well as seizing assets accrued from crime proceeds.