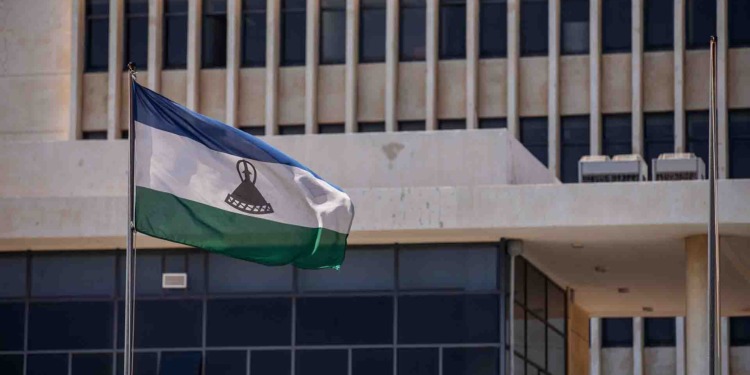 A picture taken in Maseru, on January 31, 2020 shows the flag of Lesotho outside the Parliament building. (Photo by Michele Spatari / AFP) (Photo by MICHELE SPATARI/AFP via Getty Images)

Officials in Lesotho had joined a chorus of African authorities complaining that agreements with tax haven Mauritius were bleeding their governments of much-needed tax revenue.

Lesotho has finalized a new tax treaty with Mauritius, alleviating fears in the southern African nation that multinational corporations were dodging taxes through shell companies.

The new agreement, which sets out the taxation rules for companies that run Lesotho businesses from Mauritius, came into effect replacing a 1997 treaty that, in recent years, the Lesotho authorities complained was unfair.

“The process for renegotiating the treaty was initiated by Lesotho in recognition that the old treaty was compromising Lesotho’s interests and because some of the key elements of a modern tax treaty were missing,” according to a brief provided to ICIJ by the Lesotho Revenue Authority.

Lesotho, a tiny, mountainous kingdom of 2 million people surrounded by South Africa, is rich in diamonds but has a stubbornly high rate of poverty. Almost half the population live below the poverty line, according to the World Bank.

In recent years, Lesotho’s economic performance has been negatively affected by sluggish global economic growth amid a major downturn in both emerging markets and advanced economies, as well as natural disasters. Sustained political instability, coupled with slow economic growth in the South African economy, also contributed to slow economic performance. The real GDP growth rate is estimated to have contracted by 1.2% and 0.4% in 2018 and 2019, respectively and it is projected to average 0.6% between 2019–2023, largely attributed to the expected negative impact of the COVID-19 (coronavirus) pandemic.

Tax treaties signed between Mauritius and other countries, especially those in Africa, were the focus of the International Consortium of Investigative Journalists’ 2019 which revealed that Based on 200,000 files, Mauritius Leaks exposed a sophisticated system that diverted tax revenue from poor nations back to the coffers of Western corporations and African oligarchs.

The investigation, a collaboration of journalists from 18 countries, revealed how Mauritius became the go-to destination for corporations doing business in Africa and seeking to reduce tax payments due to some of the world’s poorest countries.

For decades, some of Mauritius’ most potent tools in its arsenal as a tax haven were bilateral agreements signed with neighboring African nations. While the intention of such treaties is generally to ensure companies do not pay taxes twice on the same pool of money, savvy firms took advantage of Mauritius’ tax rate often as low as 0%  to instead pay little or no tax at all.

Setsoto Ranthocha, an official with the Lesotho Revenue Authority, told a local publication that at the time that the country regretted signing the 1997 treaty. “The companies are the winners,” he said. “It makes me go mad.”

Since the Mauritius Leaks investigation, Senegal and Zambia have torn up treaties with the island tax haven, describing them as unbalanced and unfair. Senegal alleged that its agreement with Mauritius cost it $257 million in lost tax revenue over 17 years.

Officials in Lesotho hope that the new treaty will increase tax revenue, including from foreign corporations that chose to form shell companies in Mauritius solely to benefit from the island’s low tax rates, in a process known as “treaty shopping.”

The new treaty also introduces fees for technical services and allows Lesotho to request additional information from Mauritius about the revenue and taxes of companies with operations in Lesotho.

In its brief explaining the new treaty, the LRA said that it is now better placed to recoup taxes owed by an unnamed telecommunications company that routed investments through Mauritius. “Under the old treaty it would be difficult for Lesotho to collect the tax,” the LRA wrote.

“In recent years, some mining companies from Lesotho have contemplated establishing headquarters and service Centres in Mauritius in an effort to capitalize on the old treaty,” the LRA wrote, explaining that the new treaty would “become handy in allowing” Lesotho to invalidate such schemes.

Several of the largest diamond mining companies in Lesotho, including those with headquarters in Australia, Canada, and France, use subsidiaries in Mauritius, according to financial statements.

Lesotho remains vulnerable to the COVID–19 pandemic after emerging from a second wave of infections at the start of 2021. While Lesotho launched a timely national response since the first cases of COVID-19 were identified in May 2020, Lesotho, like neighboring countries experienced a large resurgence of infections in the latter part of 2020, which accelerated from the end of December 2020 and surpassed previous levels in the country. As of March 28, 2021, the country had confirmed 10,686 cases and 315 deaths as a result of COVID-19. It is evident that Lesotho, an enclave of South Africa, is affected by the evolution of the pandemic in South Africa, one of the most affected in the African continent.

The COVID-19 pandemic is expected to lead to a significant increase in poverty and to a setback in human capital accumulation.