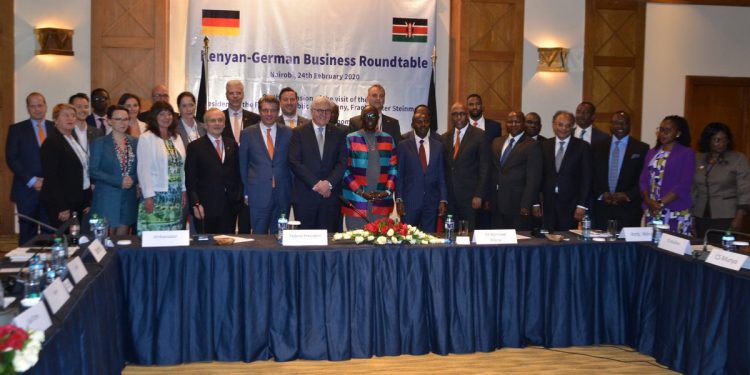 There are several thousand Kenyans living permanently in Germany

Kenya, the East African economic hub has maintained a diplomatic mission in Germany since 1964. The embassy was initially in Bonn, West Germany and later moved to Berlin after Germany’s unification.

There are several thousand Kenyans living permanently in Germany while a number of Germans enjoy Kenya’s hospitality with many of them living in the country especially along the coast.

This is the second visit by a German president after the first by President Heinrich Lauda of then West Germany in 1966. The other high profile visit was by German Chancellor Angela Merkel where she met former President Mwai Kibaki and Prime Minister Raila Odinga on a tour to begin the newly incepted ‘Afrika-Konzept’.

Germany is Kenya’s fourth-largest source of tourists and to show how cordial the relationship between the two countries is, Germany does not issue travel advisories to Kenya, unlike other European countries.

Kenya’s special relationship with Germany has seen a meeting with Foreign Affairs Cabinet Secretary Amina Mohamed with then Cabinet Secretary Frank-Walter Steinmeier in Berlin in 2014. In the same year, Horst Köhler, the former President of Germany led a trade delegation to Nairobi as the two countries sought deeper trade relations.

With German President Frank-Walter Steinmeier visiting Kenya in February 2020, the relationship between the two nations can only get better. The visit comes after Kenya and the US embarked on working on a trade deal that could be the first the US free trade agreement (FTA) with a sub-Saharan African country.

Already, the US has amended its Air Transport Agreement facilitating the movement of goods throughout the world.

During a meeting at State House, Nairobi, Germany and Kenya announced that they will partner in the transfer of technical skills and education focusing on applied sciences for Kenyans.

A bilateral meeting between the two nations’ delegations agreed that Germany will assist Kenya set up an applied sciences university where the European nation committed to continuing supporting technical and vocational training in the East African nation.

More than 100 German companies have operations in Kenya with a portfolio of over 500 million Euros. President Kenyatta said that the government is seeking to address the trade imbalance between the two countries to give value to Kenyans.

Kenya is celebrated globally as Africa’s Silicon Valley with its highly acclaimed innovations with Steinmeier saying that his country was keen on partnering with Kenya’s vibrant technological start-ups.

According to the African Tech Start-ups Funding Report 2019, tech start-ups in Kenya secured US$149 million (KSh15.04 billion) in 2019 making the country’s tech scene one of the most attractive on the continent.

Kenya topped the ranking beating Nigeria which came in second followed by Egypt and South Africa.

President Steinmeier said Germany respects Kenya’s role in the region over the decades especially on its interventions in Somalia and South Sudan. Steinmeier said that Kenya remains the anchor of stability promising Germany’s continued partnership for peace.

The German President said there should be no setback in the normalisation process in Somalia through AMISOM.

In addition, Steinmeier said his country would support Africa in combating the current desert locust invasion which he said threatens the continent’s food security. Kenya received KSh300 million (US$3.0 million) from the German government through the United Nations Food and Agriculture Organisation (FAO) to support ongoing efforts to eradicate the desert locust.

The German leader who was in the country for a three day State Visit was accompanied by representatives of the German business, education and sports sectors.