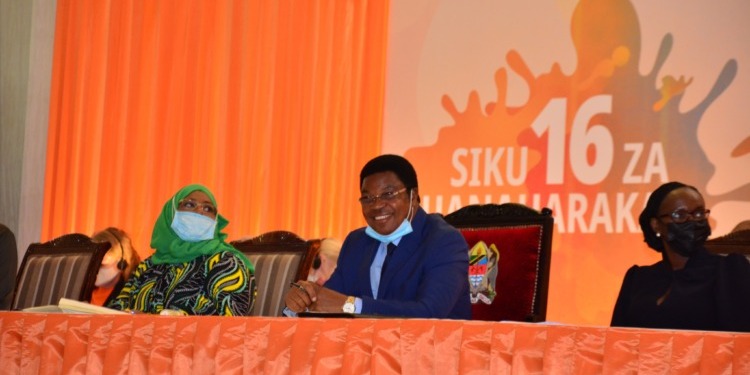 Tanzania has taken a firm stand against gender abuse in all its forms, at home, at the workplace and in universities as well.

Speaking as he launched the 16 Days of Activism against Gender-based Violence (GBV) (25 November – 10 December) Tanzania’s  Prime Minister Kassim Majalliwa said the law must take its course and end GBV in all its manifestations.

Even though this year, the global campaign marks its 30th year but yet even today, 1 in 3 women and girls worldwide still experiencing violence, warns UN Women. Underlining these numbers, at the same event, Dar es Salam Regional Commissioner, Amos Makala said:

“I had a tour to listen to citizens’ grievances, 30 per cent of the grievances I received were on the challenges of violence and sexual harassment.”

Tanzania’s Prime Minister acknowledged this fact and also pointed out that sexual corruption incidents are rampant in higher learning institutions. While police stations in Tanzania already have special gender violence desks, the PM has now launched a guide for the establishment of gender desks in the country’s universities.

The question that remains is whether these laws are been upheld and enforced and equally important, what are we doing to address prevailing social norms that favour GBV and stigmatize women for speaking up?

Harassment at the work place is a major deterrent to women career development and is behind under-performance of many companies. Due to work place harassment women are less productive and this keeps the company from achieving maximum potential.

“He is just a stepping stone” the disconcerting assertion has almost become a norm in conversation among professional women and by professional here we are encompassing every level of the workplace.

If when you read that statement you felt offended or a wave of apprehension washed over you or if what came to mind was ‘gold digger’ then you have only glimpsed into the harassment that women face every day at the work place.

To move up their career ladder many a woman are forced to give sexual favours to their superior male counterparts. Abuse at the workplace has become so pervasive that sexual favours are synonymous to women career development.

It is the sad and unfortunate truth that must be stopped. A woman’s career path should not be determined by sexual favours to her superiors but by her performances, her ambitions and her self drive, just like men.

In an exclusive with The Exchange, the Global Peace Foundation Tanzania Monitoring and Evaluation Manager Ms.  Irene Ishengoma said, “GBV at work places exists in various incidents/contexts and the main victims are women.”

She was commenting on how much sexual harassment affects women’s career development after the official launch of the 16 days of activism in Tanzania.

“At the work place, men traditionally hold key decision making positions and unfortunately they use the power they wield to sexually harass women,” she went on to explain.

“Bad enough, not all workplaces have practice the country set gender and sexual harassment policies and those who do, don’t  implement them to the fullest, especially the reporting mechanism of addressing GBV,” she added.

In June 2019, at the Centenary Conference of the International Labour Organization (ILO), the Violence and Harassment Convention (No. 190) and its accompanying Recommendation (No. 206) were adopted. The global community has made it clear that violence and harassment in the world of work will not be tolerated and must end.

Tanzania is ascribed to the ILO and must uphold the law as stated and prescribed and protect women at the workplace to ensure equality. There is need for increased awareness and behavior change campaigns to the public so that abuse at the workplace is not taken for granted.

Women must be empowered to voice out any form of harassment at the workplace and not fear stigma as a result of speaking out. On the contrary, the implicated superiors should be put to shame before the community and legal action taken by the state.

Speaking at the campaign launch in Dar es Salaam alongside the Prime Minister, Deputy Minister for Health, Community Development, Gender, Elderly and Children, Mwanaidi Ali Khamis, said the fact that many of the victims remain silent, is fueling the problem of because they do not report the cases.

“If every woman who is faced with such challenges decides to speak, the problem will end,” she asserted.

This is why it is of great urgency that public awareness campaigns are held nationwide and behavior change messages conveyed to change how the society views GBV. By so doing we will empower women to speak up against abuse not as victims but survivors.

Nonetheless, it says a lot and passes a strong message when leaders from the highest ranks of the country stand up against GBV and Tanzania has in this regard set precedence.

On the positive side of things, governments in Africa are now making legislation to curb GBV both at home and at the workplace. In Tanzania, the Prime Minister and the Health Minister opened the16 Days of Activism against Gender-based Violence on Nov 25 in Dar es Salaam, a clear indication of the kind of government support the country is putting on stopping GBV.

In Kenya, a new law has been signed to boost the fight against sexual and gender-based violence in Nairobi. Dubbed, The Nairobi City County Sexual and Gender-Based Management and Control Bill, when passed, the legislation will be a big step in the fight against GBV in the country.