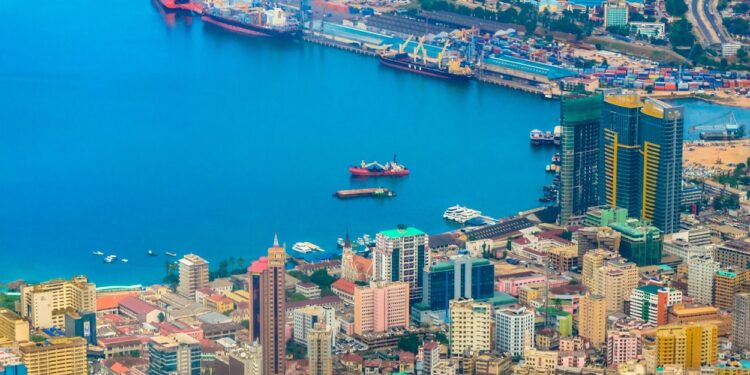 arge vessels that took up to four days to offload and turn around now take only 17 hours to offload, that is say, an average of three vehicles per minute offloaded per minute. Photo by TripReport

Dar es Salaam: How large a vessel can dock and how fast it can on or offload determines the efficiency of a port and so determines the overall value of the port not only for the country but the region.

Having addressed these basic determinants Dar es Salaam, literally ‘Port Of Peace’ is now a formidable anchor port supporting not just Tanzania but also several landlocked countries all the way from the East Coast of Africa to its deep interior in the Democratic Republic of Congo, the heart of the continent.

“With the construction of a new roll-on, the roll-off terminal at the port has boosted its capacity to handle much larger vessels with efficiency, and to improve on the turnaround time for ships coming through,” notes the World Bank.

Buzzing with activities, the Port of Peace, Dar es Salaam is a hive of economic growth. Large vessels, the Post-Panamax monsters, can dock and offload in but a matter of hours. Just a year ago, that fit was unfathomable, but a solution was in the works, the port had to be deeper, it had to be wider.

So in 2018, work began to dig up and expand what was a mere creek outlet to join it to the rest of the deepwater mass, it worked. What was not even a true mouth of a river, just an estuary of distributaries is now a dock with the country’s first dedicated roll-on, roll-off (“RoRo”) infrastructure ramp and terminal.

Before the ramp and terminal were built, large cargo like vehicle containers had to be offloaded using ship cranes. The process was odious, dangerous and very time consuming denying both the country and the merchants tremendous amounts of income.

Even after successful offloading, still, the vehicles had to be driven up to 2 km away from the berth just to find parking space. After the drop-off, there were no shuttles to drive the drivers back, no, they had to walk the two km back, again losing valuable time.

“Motor vehicle imports arrived on much smaller ships due to the depth restrictions alongside the berths. Rather than being driven from the vessels, the vehicles on board would need to be offloaded with ships cranes at great risk to both the staff and the cars, and with the exercise requiring no less than three days to accomplish,” writes

President of the Tanzania Freight Forwarders Association, Edward Urio comments that the low capacity of the port not only caused loss of revenue due to slow turn-around of boats but also caused huge demurrage charges.

“Vessels would queue for up to 14 to 20 days waiting for berthing space, costing some chartered vessels demurrage ranging from US$25,000 to US$40,000,” he laments.

The RoRo, along with the ramp and terminal were completed as of March 2021 after three years of dedicated construction works. With its completion, vehicles can now be driven, not carried, off the ship.

With this development, large vessels that took up to four days to offload and turn around now take only 17 hours to offload, that is say, an average of three vehicles per minute offloaded per minute.

The terminal is also a major game-changer because instead of driving two km in search of parking, vehicles can now be parked in the spacious berth with a handling capacity of 3,000 vehicles at a time.

What is the overall effect of these good works? The number of vessels received at the port has doubled from six to 12 per month. As a result, since March last year, when the RoRo became operational, more than 150 vessels have already been received and attended to within record time.

The DMGP infrastructure works were completed with the financial support of the World Bank and the UK Foreign, Commonwealth and Development Office. Through the DMGP the ocean floor was deepened alongside berths 1-7 to reach 14.5 meters the mere 8-meters it had before and now much larger vessels can dock.

“This project has been under implementation since 2017 with the objective of improving the effectiveness and efficiency of the Port of Dar es Salaam for the benefit of public and private stakeholders through the strengthening of the physical infrastructure as well as TPA’s institutional capacity,” he notes.

The Director-General went on to explain that the expansions works are still ongoing and now preparations for the upgrading of the port alongside berths 8 through to berth 11 are well underway.

“We are now working to deepen berth 15 to 15.5m and we will also improve the rail platform and linkages within the port,” he said.

As mentioned, these expansion efforts have great economic significance the least of which has not been increasing direct employment. For instance, when more vehicles are offloaded, then drivers get hired to drive them to the borders where they are to cross to respective countries of destination.

Tanzania Ports Authority (TPA) Director-General Hamissi, asserts the ports economic significance to the country and the region. He describes the port as ‘a crucial source of direct and indirect employment to thousands of people along the supply chains.’

The Port of Peace is an anchor port and so its efficiency does not only benefit Tanzania but all neighbouring landlocked countries. These include but are not limited to Rwanda, Burundi, Uganda and the Democratic Republic of Congo.

Should the expansion plans go as planned, the Port of Peace is anticipated to handle over 30 million tons per year by 2030 and with such an enormous capacity the port will be the key to regional economic growth and integration.