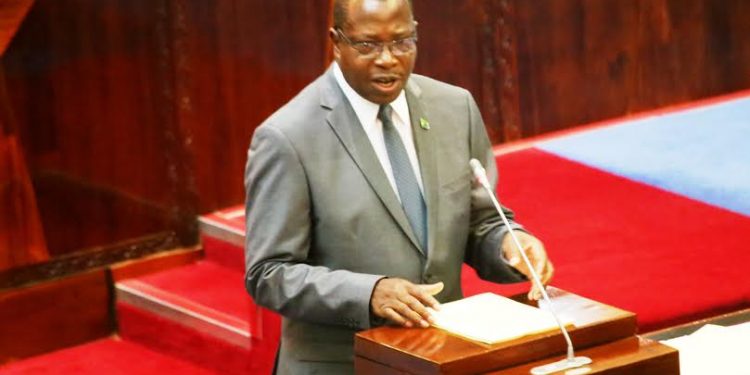 The government blocked the release allegedly it was one-sided

Finance and Planning Minister, Dr Phillip Mpango opened up on April 23, 2019 detailing why the government did not give IMF the green light to publish the content.

Responding after the matter was raised in the National Assembly, Dr Mpango said that the go-ahead was not given because opinions given by government experts after reading the first draft were not included in the final report.

“The IMF team was in the country from November 26 to December 7 last year. After preparing the draft I received on March 18 and we gave opinions that should have been accommodated in the final report but that did not happen,” the minister said.

Dr Mpango noted that during his recent visit to Washington DC for the 2019 spring meetings organized by the World Bank and IMF, he held talks on the subject with Abebe Selassie, who is the director of the Africa Department at the IMF.

“Even today we are continuing with discussions on the subject. After the executive board of IMF received the final report, the government had 14 days to go through it and sanction its publication or not,” he said.

Under Chapter IV of its Articles of Agreement, the IMF has the mandate to exercise surveillance over the economic, financial and exchange rate policies of member states in order to ensure the effective operation of the international monetary system.

The executive board of IMF announced last week that it had concluded the consideration of the 2019 Article IV Consultation with the government but was not allowed to make the report public. `The authorities have not consented to publication of the staff report or related press release,` the IMF statement reads.

The IMF said in a notice published on its website that appraisal of its members’ economic, financial and exchange rate policies involves a comprehensive analysis of the general economic situation and policy strategy of each member country.

“IMF economists visit the member country, usually once a year, to collect and analyse data and hold discussions with government and central bank officials. Upon its return, the staff submit a report to the IMF Executive Board for discussion. The Board’s views are subsequently summarized and transmitted to the country`s authorities,” the notice intoned.

However, in a leaked report last week in which the IMF said was not made public because after Tanzanian authorities did not consent to its publication, the Fund said a weak business environment and the implementation of projects that may not have high rates of return were likely to constrain annual GDP growth.

Tanzania has of recent undertaken multiple projects that are aimed at making the country a middle-income economy by 2025.

Some of these projects include the Tshs.8.2 trillion ($3.6 billion) Rufiji Hydropower project which is expected to add 2,115 MegaWatts to the national grid and the purchase of aircraft for the national carrier that cost over Tshs.1 trillion ($500 million).

Earlier this month, the IMF lowered its forecast for Tanzania’s economic growth for 2019 and in 2020 to around 4 per cent from a previous forecast of 6.6 per cent in 2018.

In it’s World Economic Outlook, released on Tuesday, April 9, 2019, the Fund also predicted Tanzania’s consumer price inflation will reach 3.5 per cent this year and edge up to 4.5 per cent in 2020.

In January last year, the IMF said it expected Tanzania’s economy to grow at 6–7 per cent over the medium term if the country hiked capital spending and improved its business environment.

How diplomats' mass exits from Kenya have affected real estate