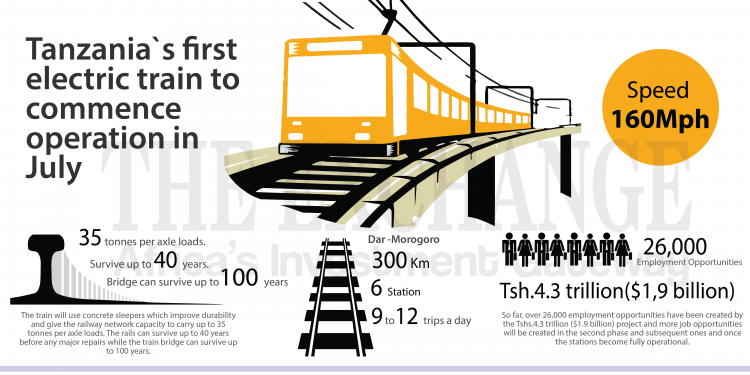 The government is set to test its first train in July

Tanzania is set to test its first, maiden, cheaper and very superior own funded electric train. The train is tipped to be one of Africa`s high speed trains with projected speeds of up to 160 mph.

Speaking at a historic event to launch the flash butt welding of the Standard Gauge Railway (SGR) exercise that took place at Soga in Coastal region outside Dar es Salaam, the Minister for Works, Transport and Communications, Eng. Isaac Kamwele said first trials for speedy electric train will be conducted in July this year to cover a section of the SGR.

The first 300 kilometers phase running from Dar es Salaam to Morogoro with 6 stations in between will commence its operations in December this year. This will be three passenger trains in phase one at the starting point that will be taking daily round trips between the two cities. Each passenger train is capable of making 9 to 12 trips a day or even more.

The train will use concrete sleepers which improve durability and give the railway network capacity to carry up to 35 tonnes per axle loads. The rails can survive up to 40 years before any major repairs while the train bridge can survive up to 100 years. The Tanzania SGR will have a speed capacity of 160Km/h in comparison to other SGR’s such as Kenya and South Africa that can move up to 120Km/h.

So far, over 26,000 employment opportunities have been created by the Tshs.4.3 trillion ($1.9 billion) project and more job opportunities will be created in the second phase and subsequent ones and once the stations become fully operational.

The first railway lines in Tanganyika, known at the time as German East Africa, were built soon after the first tramway in Zanzibar.

In 1891, the Eisenbahngesellschaft für Deutsch-Ostafrika (English: Railway Company for German East Africa) was established, with the goal of building a railway from Tanga in Tanganyika to the hinterland. For that, and subsequent, main lines in the German colony, the gauge selected was 1,000 mm (3 feet 3 inches) meter gauge. In addition, light railways were developed for individual Tanganyikan sisal plantations in narrower gauges, usually 600 mm (1 foot 11 inches) gauge.

The construction of the Usambara Railway, from Tanga to the hinterland, began in 1893. However, the company building that railway went into bankruptcy after two years. At that stage, only 40 km (25 miles) of track had been completed, as far as Korogwe. The treasury of the colony then took over the project in 1899. Four years later, in 1903, it issued an Order for further construction. Subsequently, there were other attempts to operate the railway on an economically and juristically stable footing.

In 1904, the smaller railways received a boost. Meanwhile, in Germany, the Sigi-isenbahngesellschaft (English: Sigi Railway Company) was established, with the objective of constructing one of the narrow gauge railways branching off the Usambara Railway, the Sigi-Bahn, in 750 mm (2 ft 5.5 inches) gauge. The same year, 1904, the Ostafrikanische Eisenbahngesellschaft (English: East African Railway Company) (OAEG) was formed to promote a railway from Dar es Salaam in the direction of Lake Tanganyika, the Zentralbahn (English: Central Line). Kigoma was reached on 2nd February 1914, on the eve of World War I. Later in 1914, work began on the Ruandabahn, a line from Tabora in the territory that was later to become Rwanda. This project was thwarted by the outbreak of World War I.

How investors will benefit from Equity, Tellimer research insights on the region