The donation was also topped up with the contribution of $640,000 in cash to meet associated costs like transportation, handling and storage. 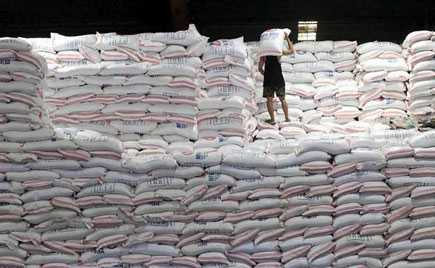 Uganda received 4,758 metric tons of rice for distribution to refugees and socially vulnerable people including those in communities hosting refugees.

The donation was also topped up with the contribution of $640,000 in cash to meet associated costs like transportation, handling and storage.

‘Japan grants aid for the foods assistance program’ made possible for the food donation. A grant of about Ush 12 billion was given to the Ugandan government in 2017.

While addressing the media at the World Food Program warehouse in Nalukolongo, Ambassador Kameda said, “I’m happy to note that using this grant assistance, 4,758 metric tons of rice have been procured for the improvement of nutrition of at least 350,000 refugees and 150,000 host community members.”

The World Food Programme (WFP) and the office of the Prime minister will distribute the donated rice to the refugee community in Uganda in the settlements of Nakivale, Kyaka 11, Kyangwali, Oruchinga and Rwamwanja in Southwest and western Uganda as well as Rhino camp in West Nile.

The Commissioner for Refugees in the Ministry of for Disaster Preparedness and Refugees who represented Hillary Onek (minister) during the handover thanked the Japanese government for the support.

“We have received food (rice) donation worth USD 3.5 Million from the people of Japan to support over 1.4 million refugees in Uganda. We appreciate the support from Japan but this is just a drop in the ocean for the quantities needed to support our people.

“The government of Uganda has also endeavoured to give land to the refugees so that they can start farming to support themselves because they receive few kilograms of food that can hardly sustain them,” Menya noted.

“We need $16 million for every single month to provide food and cash assistance to 1.4 million refugees in Uganda. This amount is just for one out of the six priorities of our re strategic plan.” El Khidir Daloum, the Country Director and Representative, World Food Programme said.

As of January 2020, Uganda hosts the highest number of refugees in Africa 1.4 million. Of which 83% of the refugees in Uganda are women and people aged under 18.