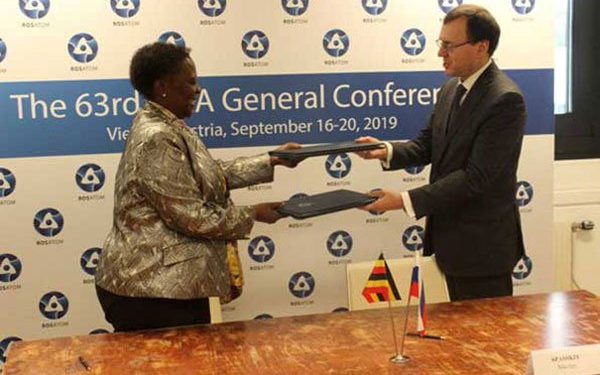 by Caroline Muriuki
in Extractive and Energy, Uganda
0
Share on FacebookShare on LinkedIn

Russia and Uganda have agreed to work together in the field of nuclear energy, Rosatom the Russian nuclear agency said on Wednesday.

Russia’s state-owned companies have been the key part of the strategy to bolster Moscow’s presence in Africa, as it seeks to strengthen its influence in Africa.

Ugandan President Yoweri Museveni is seeking to use his country’s uranium deposits to develop nuclear power.

The two countries signed an intergovernmental agreement to cooperate in the peaceful use of nuclear energy. The agreement was signed on the sidelines of the 63rd General Conference of the International Atomic Energy Agency, in Vienna, Austria, on Tuesday.

The agreement was signed by Nikolay Spassky, Deputy Director General – Director of international activities of Russian State Atomic Energy Corporation Rosatom, on behalf of Uganda by Eng. Muloni Irene Nafuna, the Minister of state for energy and mineral resources of the Republic of Uganda.

Rosatom said the deal lays the foundation for specific cooperation between Russia and Uganda in the field of nuclear energy.

In particular, the deal agreement implies joint work in areas such as the production of radioisotopes for industrial, creation of nuclear infrastructure, healthcare and agricultural use. It also covers education and training of personnel.

It was further agreed that the visits would be to create workgroups for specific applications in specific areas, including the construction of a nuclear science and technology centre in Uganda, which would be centered on a Russian-designed research reactor.

Uganda’s energy needs are expected to jump in coming years as it prepares to start producing crude oil in 2022 from its fields in its west where the reserves of 6 billion barrels were discovered in 2006.

Uganda’s ministry of energy and mineral development had previously said that Uganda has substantial deposits of uranium but reserve estimates are not known, as the mineral has not been commercially explored.