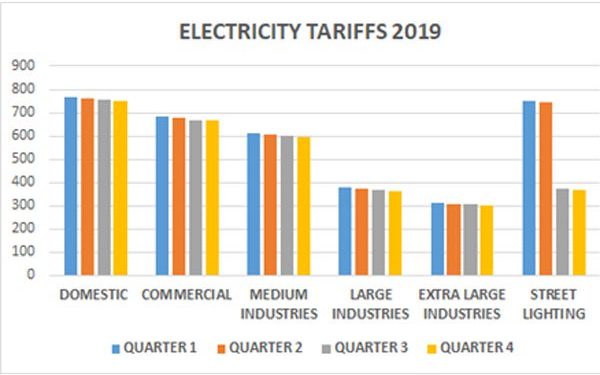 by Caroline Muriuki
in Extractive and Energy, Uganda
0
Share on FacebookShare on LinkedIn

Electricity Regulatory Authority (ERA) has reduced power tariffs by an average of Ush2.4 from October to December quarter.

The tariff reduction will apply to all consumption categories including domestic and extra-large consumers.
The first 15 units for Ush250 with units from sixteen upwards now costing Ush752.5 per unit from Ush755.1 in September.

During this period, commercial consumers will enjoy Ush3.4 tariff reduction from Ush669.5 to Ush666.1 while medium industrial users will pay Ush595.6 per unit from Ush599.2, which has been reduced by Ush3.6. Large industries will pay Ush364 from Ush365.7, saving the industrialists Ush1.7.

Extra-large industries, on the other hand, will be paying Ush302.6 per unit from Ush304.7 in the previous quarter saving them Ush2.1 in the three months leading to December.

The Electricity Regulatory Authority has maintained its strategy to continue reducing tariffs on street lighting, which was reduced by almost a half last month to Ush371.4 per unit.

The government of Uganda will now pay Umeme less by Ush1 within October to December at Ush.370.4 per unit for streetlights.

ERA approves tariffs based on changes in international fuel prices, inflation, exchange rate and Energy Generation Mix. To determine the reduction of the tariffs, tariffs have been set against low inflation and a relatively stable exchange rate of Ush3689.33 against the dollar.

International fuel prices reduced to $59.62 per barrel in September from $69.97 in June despite turbulences, such as the Saudi Arabia bombing.

The electricity supply industry in Uganda has seen developments this year, especially with the commissioning of 183-megawatt Isimba dam in March this year.

Besides being under-utilized, Isimba is expected to drop the average price of electricity paid across all power generating sources since its power costs only 4 cents.

However, to achieve this, more consumption of electricity must be realized in Uganda. Since the beginning of the year, the regulator’s biggest power cut has been street lighting at Ush380 while domestic consumers pay Ush16 less currently than they did in January.