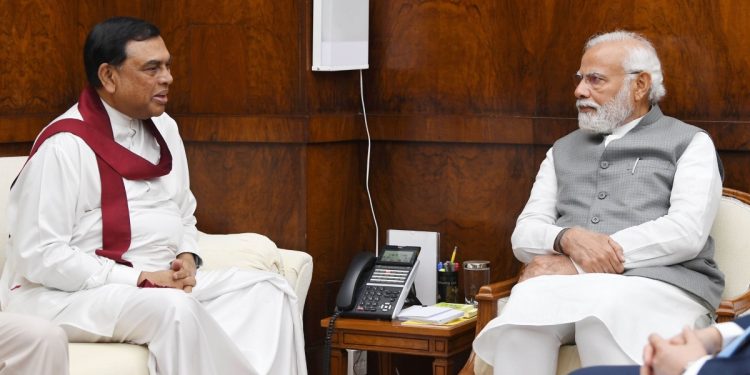 India and Sri Lanka are set to finalise a US$ 1 billion line of credit on Thursday, March 17, 2022. Photo: Narendra Modi

The funding will help Sri Lanka with the ongoing economic crisis that has resulted in shortages of essentials including fuel and cooking gas.

India and Sri Lanka will finalise a US$1 billion line of credit on Thursday, March 17, 2022.

According to Hindustan Times, the funds by India are expected to help Sri Lanka cope with the ongoing economic crisis, which is the worst that the island nation has faced in decades.

Sri Lanka will use the funding to acquire essentials such as food and medicine.

Read: With AfCFTA, what’s in Africa for India?

During the meeting, Modi said India would “continue to stand with the friendly people of Sri Lanka” the news portal quoted the external affairs ministry.

According to the publication, the two leaders discussed various issues: renewable energy, agriculture, tourism, and fisheries.

In their agenda, they also discussed digitisation and fisheries.

For instance, on fisheries, the leaders admitted the sector was complex, adding that it had multidimensional aspects.

These include humane treatment of fishermen and their livelihood and ocean ecology, among other issues.

At the same time, the leaders discussed Sri Lanka’s latest interest in organic agriculture. Under the sector, the Indian prime minister outlined the advantages of natural farming and the country’s experience in developing methods that include nano-fertilisers.

According to the news portal, Rajapaksa’s trip is the second he has made to India since December 2021.

Over the past few months, India has provided Sri Lanka with loans amounting to US$500 million to purchase fuel and a currency swap of US$400 million under the Saarch facility.

“It has also deferred the payments of US$515 million due to the Asian Clearing Union.”

The visit by the finance minister to India comes when the country is facing the pressure of the economic crisis and ongoing calls for his resignation for how he has handled the situation.

According to the news portal, to protest, tens of thousands of people gathered outside President’s Gotabhaya Rajapaksa office in Colombo on March 15, 2022. They were led by the country’s opposition United People’s Force party.

Thousands take to the streets

In a separate story, Aljazeera has reported that Sri Lanka’s opposition leader joins tens of thousands to the streets of Colombo to demonstrate against the economic crisis.

While terming the times citizens were facing as the worst seen in decades, the opposition leader declared that it was the beginning of a campaign to remove the sitting government.

“You have been suffering now for two years. Can you suffer further?” Aljazeera quoted him.

Protestors accused the Rajapaksa-led administration of mismanaging the economy and creating a foreign exchange crisis.

According to the demonstrators, the crisis had led to shortages of essentials, including fuel, cooking gas, milk powder and medicine.

Available data indicates that the South Asia nation is struggling to pay for imports as its foreign reserves dry to an all-time low.

On Wednesday, March 16, 2022, the country announced it was seeking an International Monetary Fund bailout to battle record inflation.

The move would also allow the country to battle unprecedented food and fuel shortages.

Rajapaksa’s move came when the country had run out of dollars to finance imports.

According to France24, the crisis is the worst that Sri Lanka has faced since 1948 when it gained independence.

“Subsequent to my discussions with the International Monetary Fund, I have decided to work with them,” Rajapaksa said to the nation.

His address comes days after Sri Lanka’s central bank floated the national currency, resulting in its devaluation by 36 per cent and a further sharp rise in prices.

Read: Is Crypto banned in India?