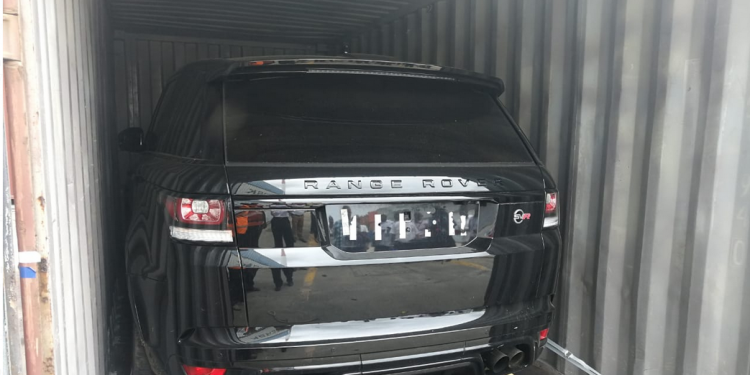 A multi-agency team involving Kenyan and UK authorities have been working together in investigations to break the syndicate involving smuggling of stolen vehicles from Europe.

by Chacha Mwita
in Crime, East Africa
0
Share on FacebookShare on LinkedIn

Kenyan authorities have unearthed an international car smuggling racket targeting the East Africa region, one in many that have been busted in recent times.

On May 9, 2019, Customs officers in Mombasa received intelligence to the effect that two 20-foot containers on board a ship sailing to the Port of Mombasa was suspected to be stolen motor vehicles from the United Kingdom.

The containers arrived at the Port of Mombasa on May 11, 2019 aboard MV. MSC Positano from Oman and had not been declared.

Authorities subjected the two containers to x-ray cargo scanning where the images revealed the presence of top of the range motor vehicles.

According to import documents, the Range Rover Sport cars, which were subject of an international motor vehicle crime and smuggling investigation, were on transit to Uganda.

“a multi-agency team led by Customs officials undertook a verification exercise on  May 28,  2019 confirming the containers were loaded with the high-end Vehicles,” Kenya Revenue Authority’s  Commissioner for Customs and Border Control  Kevin Safari said in an official statement this week.

A multi-agency team involving KRA, National Security Agencies, Interpol, United Kingdom Authorities and other international partners have been working together in investigations to break the syndicate involving the smuggling of stolen high-end vehicles from Europe.

The UK has been a top source for stolen vehicles which are either shipped directly or transited through other countries, mainly the Middle East, to the East African markets through the Port of Mombasa, a move that has sent jitters on both Kenyan and foreign authorities.

This is not the first time UK vehicles, suspected to be stolen, find their way into Kenya, Uganda and the hinterland.

In April, KRA officials intercepted several luxury cars which were believed to have been stolen from the UK.

The units, with an undisclosed value, were nabbed at the port (Mombasa) after arrival where they had been declared as household goods.

UK ambassador to Kenya Nic Hailey was present during the opening of the containers where he said the National Crime Agency would partner with Kenyan authorities in the fight against the frequent vehicle theft cases.

NCA is a leading UK agency that is tasked to fight serious and organised crime.

In March this year, KRA intercepted three high-end fuel guzzlers at the Port which were on transit to Uganda.

The three units – a Range Rover Sport, a Range Rover Vogue and Land Rover Discovery were identified to have been stolen, according to Interpol’s motor vehicles database.

Kenya and UK officials recently oversaw the re-exportation of 12 high-end vehicles which had earlier been seized by KRA after being smuggled into the Country as transit goods.

According to KRA, the units worth millions of shillings were stolen in the UK last year before being shipped to Kenya in an international crime syndicate.

Commissioner Safari (KRA Customs and Border Control) has since said authorities between Kenya and the UK have heightened surveillance and collaboration to fight the trend which has become common in recent times.

“KRA, local security agencies, Interpol, United Kingdom Authorities and other international partners are working together towards breaking the syndicate involved in smuggling stolen vehicles from UK into Kenya,” he said.

In 2015,  a report in the UK revealed  British police and their East African partners seized stolen UK cars worth more than Ksh161 million (US$1.6million) in Uganda.

According to authorities, a huge number of buyers, mainly in Kenya and Uganda where the vehicles are sold, are unaware that the cars are stolen.

The latest developments come even as the government moves to instill discipline among importers and exporters doing business in Kenya.

The government is currently vetting importers and exporters of consolidated cargo in a move aimed at curbing tax cheats and dealing away with unscrupulous players.

Rogue state officials have been accused of colluding with unscrupulous traders to facilitate false declarations, denying the Kenya Revenue Authority (KRA) requisite taxes, such as import duty, a move said to have led to a loss of over US$987.8million in recent times.

Most of the vehicles nabbed at the Port of Mombasa are stuffed in containers which are imported as consolidated cargo, with under-declaration and misdeclaration by traders being a major trend.

Speaking during a recent stakeholders meeting at the Embakasi Inland Container Deport (ICD), In Nairobi, President Uhuru Kenyatta faulted cargo consolidators for contributing to delays in clearance of containers, as a huge number of them are subjected to 100 per cent verification.

“All consolidators must now be vetted by KRA, they must be gazzetted and only those shall be allowed to do business so that we ensure we have trustworthy people who will not try to avade taxes,” President Kenyatta said.

The Kenyan government has scaled up the war on illicit trade in the country in recent times.

READ ALSO:How Kenya is arming itself to fight counterfeits

A multi-agency team appointed by President Uhuru Kenyatta in leading the onslaught has identified key areas in which it has been focusing on since last year.

They include the agriculture sector, beauty and cosmetics, electronics, building and construction and alcoholic beverages.

Others are motor vehicles, food stuffs, bottled water, ICT, sugar and the oil and gas sector.

“We will no longer continue to allow counterfeit goods that come into our country. Very stringent measures will be taken against those who want to continue to perpetrate that agenda of counterfeit and illicit trade,” President Kenyatta said when he appointed the team.

An approximate US$ 42 million is lost by Kenyan manufacturers annually, while the government loses US$80million as potential tax revenue to illicit trade. Kenya's move to introduce new currency felt in the region