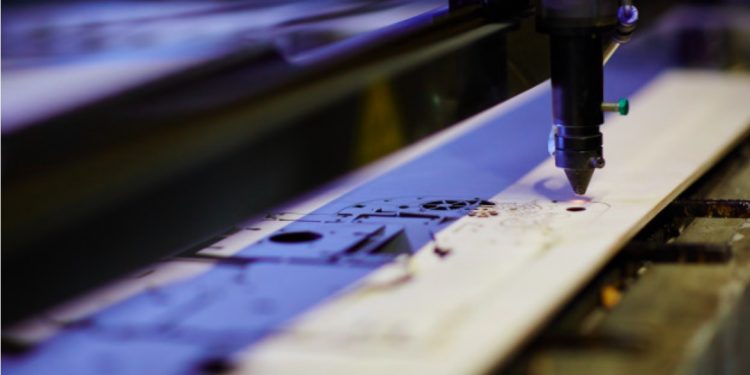 A laser machine in a factory. Companies are setting up factories in Africa to tap into the continent’s cheap labour and abundance of raw materials.

The Chinese are now controlling an estimated US$208 billion

While China is not investing much in Africa’s manufacturing, there is a lot that is happening to boost the sector, an indirect benefit of its presence on the continent.

After surpassing the US in 2009, China became Africa’s largest trading partner.  The Asian giant’s hegemony over the continent has ruffled feathers globally as hitherto allies and financial muscles become decrepit, unable to keep the investment pace by the Chinese.

For perspective, China’s trade with Africa has exploded.  From trade worth US$10 billion in 2000, the Chinese are now controlling an estimated US$208 billion, up from US$155 billion in 2017 according to the UN Comtrade.

Read: U.S. Beware: China is ahead of the game

The South China Morning Post reported in January that China’s trade with Africa grew 2.2 per cent to hit the US$208 billion mark.

Prior to this, and according to data from the UN Comtrade, China hit the US$200 billion mark in 2015 but then business slowed down in 2016 before picking up again in 2017. The estimates have been rising since then until the Covid-19 pandemic hit.

According to China’s General Administration of Customs, data from the first three months of 2020 shows trade was hectic with business falling by 14 per cent to US$41 billion in comparison to the same period in 2019.

During the first three months of 2020, most of China was in lockdown after coronavirus cases spiked even as the Chinese authorities extended the Lunar New Year holiday in a bid to slow down the spread.  Overall, the Chinese economy shrunk by 6.8 per cent in the first quarter of 2020 as factories remained closed.

Manufacturing was greatly hit which led to reduced output across the country leading to decreased exports to Africa. Conversely, exports from Africa to China slowed by 17.5 per cent in Q1 2020 as lockdowns took root in many African countries.

To help revive the badly dented African economy, the Director of the Department of African Affairs at the Chinese Ministry of Foreign Affairs, Wu Peng, has said that at the request of African countries, China is strengthening the production of materials locally to help tide over the difficulties.

Speaking at a webinar organised by the Chinese Mission to the African Union and the UN-ECA, Peng said that China is willing to work with African countries to advance cooperation within the framework of the China-Africa Cooperation Forum and in vaccine research, infrastructure construction, trade and e-commerce.

While this promise is happening on the backdrop of the global pandemic, there is much more than the African continent could achieve economically from business spurred by China’s Belt and Road Initiative (BRI).

With the minimum wage in China now up to three times more than in many African countries, manufacturers are encouraged to move to Africa.  This move will be facilitated by the BRI which is creating better access to Europe and the United States from Africa.

Already, as the initiative takes shape, there are industrial estates springing up across the continent. These projects are funded by Chinese investors who are attracted by cheap labour and an abundance of raw materials.

Just like it happened with Asia in decades past, companies are wont to set up factories in Africa to tap into the continent’s cheap labour and abundance of raw materials.  So serious is this venture that Chinese investors are financing the construction of industrial estates and free trade zones. These are in readiness for the production of goods to be exported to China.

Leading the way in this is the Pearl of Africa, Uganda.

In May, President Museveni commissioned two production lines at a Chinese-owned firm making face masks and personal protective equipment.  The move was aimed at reducing shortages of the medical outfits as the country was battling to contain the spread of coronavirus.

Several other factories have set up shop in Uganda with Museveni saying that the country has enough raw materials which can feed industries for the production of commodities rather than relying on imports.

Uganda is a classic case of how manufacturing is shifting to Africa from China. Other countries are Ethiopia and Egypt which have attracted a sizeable number of investors from China.

As it is, it seems like now more than ever the future promised to Africa is here.