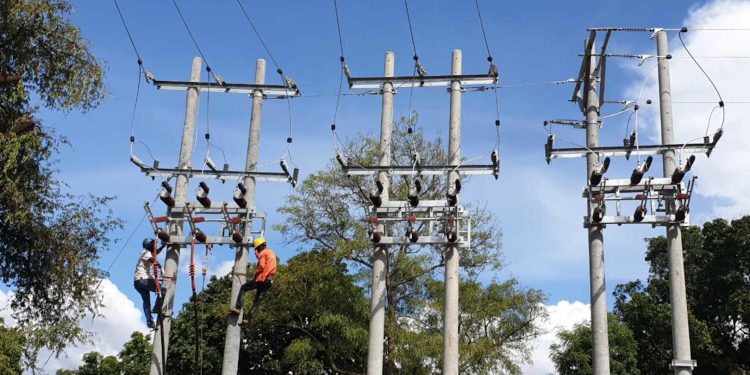 The International Energy Agency points to Africa as a region harbouring nearly 17 per cent of the global population but it only holds four per cent of global power supply investment.

by Padili Mikomangwa
in Economic Growth, Energy
0
Share on FacebookShare on LinkedIn

The future of Africa is fenced around its ability to utilize renewable energy potential. Harnessed effectively, Africa stands to become the next world powerhouse and take over energy production once and for all.

In this context, the African sun has plenty of potential to transform the continent’s energy generation landscape.  Africa is endowed with plenty of renewable energy, hydropower and natural gas.

The International Energy Agency points to Africa as a region harbouring nearly 17 per cent of the global population but it only holds four per cent of global power supply investment.

Africa is endowed with an abundant reserve of solar energy standing at 60,000,000 TWh/year, which accounts for almost 40 per cent of the global total—this means Africa is the most sun-rich continent in the world (Solar GIS).

However, some challenges undermine Africans from exercising their power consumption abilities. Over 640 million Africans have no access to energy, which corresponds to an electricity access rate for African countries at just over 40 per cent, according to African Development Bank (AfDB).

Further, the AfDB noted that per capita consumption of energy in sub-Saharan Africa (excluding South Africa) is 180 kWh, compared to 13,000 kWh per capita in the United States and 6,500 kWh in Europe.

The ability of the region to generate a significant amount of power provides a first-class ticket to secure its future. This means the development of crucial sectors of the economy, such as agriculture, health, education, manufacturing, transport and services.

Becoming a power hub makes Africa not only a region with robust functioning economic systems, especially industrial and technological landscapes, but also a desirable spot for investment—which translates to a reduction of the cost of doing business, job creation and unlocking economic potential.

Africa can break through the ceiling with solar energy. At this time and age, Africa is at the right moment to utilize the technology it has to capture every strike of energy from the sun to power Africa and here is why.

Solar energy is the way

As a continent with plenty of sun-cover annually, Africa has the potential to maximize its energy generation for the betterment of the population at large. International Renewable Energy Agency (IRENA) argues that with sustainable use of renewable energy, associated with the right policies, regulation, governance and access to financial markets, Sub-Saharan Africa could meet up to 67 per cent of its energy demands by 2030.

Africa has been taking serious steps towards developing structures for the adoption of clean energy—for instance, progress in the development of solar energy markets over the recent years, with the growth of over 1.8 W of new solar installations, driven in five countries, Egypt, South Africa, Kenya, Namibia and Ghana, according to a publication by United Nations.

The region can tap into the energy and maximize electricity access and consumption across communities. Solar PV tariffs have even become economically viable, at $0.4, which is a low price.

Multinational companies (such as Solektra International, Strauss Energy, M-KOPA Solar) have already taken interest in the region’s rich solar energy and are striving to develop it further by introducing different resources along the value chain, including mini-grid structures which fill in huge gaps lefts by the national grid.

Nearly two per cent of electricity comes from renewables which are around 2.2 GW in Africa—which IRENA maps points out that users could consume about 70 GW by 2030, according to a 2017 publication by Schroders, a world-class asset management company.

Great things are occurring also in the solar energy industry. In East Africa, the business model, “Pay-as-you-go” solar has achieved more than 500,000 new users since 2015.

Further, according to Schroders, between 2014 and 2018 solar costs in Africa were trimmed down.

“Currently on-grid commissioned and planned utility-scale solar PV projects (2014 – 2018) range from $1.2 to $4.9/W in Africa, down from between $3.4 and $6.9/W in 2012. That cost advantage over other energy sources is likely to grow as technologies develop and local infrastructure improves.”

On the other side of the aisle, a publication, Africa Renewal by the UN, argues that the cost for electricity from utility-scale solar photovoltaics (PV) fell 82 per cent between 2010 and 2019, while a similar trend in wind projects reflected a 50 – 60 per cent decline between 2010 and 2019.

Kenya solar desalination plant is established in a joint partnership with an American NGO known as GivePower.  The village now executes complex tasks with the use of solar panels; with more than 3,500 people the village desalinates ocean water for its daily consumption. This shows how much solar energy can transform rural economies if utilized effectively.

Mini-grids in Tanzania have changed the power access game completely for rural dwellers in the most populous country in East Africa.

“In 2017, mini-grid developer PowerGen installed a solar hybrid mini-grid in Kalenge with the aim of providing electricity to homes within a 600-metre radius. Partially funded by Tanzania’s Rural Energy Fund and PowerGen, Kalenge mini-grids are one of many solutions being implemented in Tanzania as part of the country’s efforts to increase access to electricity in rural areas,” according to a publication based on research conducted by Stockholm Environment Institute (SEI).

Schroder argues that emerging economies across the continent have the benefit of a blank energy infrastructure slate—they have fewer sunk costs in fossil fuel power plants, which provides them with ample leeway to leapfrog inefficiencies that hamper developed economies and embrace renewable energy sources particularly solar power.

“At the regional level, the Green Climate Fund (established by the UN to assist developing countries on climate change mitigation and adaptation) set aside US$250 million as public debt (funds borrowed by governments to meet development budgets) to leverage US$4 billion for 10,000 mini-grids across Sub-Saharan Africa. In Tanzania, 19 solar projects benefitted from the national energy fund at a cost of about US$890,000 in 2013,” SEI.

At the moment Africa has in place a fair amount of support structure to build its renewable energy system from the funding perspective—with the AfDB committing to significant support across the continent to develop Africa’s power systems through its renewable energy fund, to clean energy start–ups in East Africa, South Africa and Northern Africa.