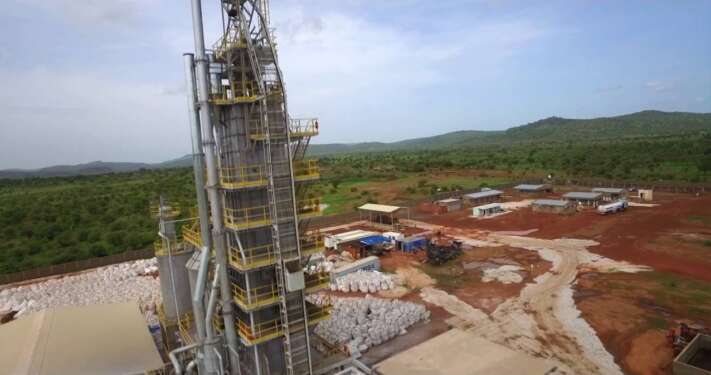 The Carrieres et Chaux du Mali. The company has received funding from the IFC to increase output of lime in Mali. [Photo/IETP]

Agribusiness and gold mining are hugely important to Mali’s economy

In August 2020, Mali had a bloodless coup carried out by military officers leading to the country’s President Ibraham Boubacar Keita and Prime Minister Boubou Cisse resigning.

The coup came after months of protests against Keita’s administration.

News like this has dominated the country’s narrative but little has been said about its economy and growth.

According to the African Development Bank (AfDB) Group, Mali’s economy has remained resilient despite the security crisis.  The West African country recorded a 5 per cent real GDP growth in 2019 driven by favourable gold and cotton production. It had a budget deficit of 3.1 per cent of GDP and 0.4 per cent inflation while public debt stood at 35.5 per cent of the GDP at the end of 2018.

Read: Just How Much Gold is Beneath the Surface in East Africa?

AfDB notes that the economy remains under-industrialized with the manufacturing industry struggling to develop. These challenges necessitate an enormous need for imports and to a current account in deficit at 5.4 per cent of GDP in 2019.

The country’s investment is particularly low, at 9.5 per cent of GDP for the private sector and 8.7 per cent for the public sector.

The International Finance Corporation (IFC) notes that agribusiness and gold mining are hugely important to Mali’s economy and they employ millions accounting for the bulk of the country’s gross domestic product and exports.

Mali is a landlocked country and the two industries of agribusiness and gold mining both depend heavily on quicklime. The chalky, alkaline substance derived from limestone is used in the refinement and conditioning of gold.

In agriculture, lime which is a quicklime by-product, reduces soil acidity, helping farmers to achieve bigger yields.  The irony is that Mali imports most of the quicklime needed by its economy despite having large lime reserves of its own. This importation drives up production costs which takes away attraction to the important drivers of growth.

As a means to making Mali more independent when it comes to quicklime production, the IFC has invested in local lime producer Carrières et Chaux du Mali (CCM) to help it boost production and improve efficiencies.

The IFC and International Development Association (IDA) Private Sector Window (PSW) financing package consists of an €8.9 million-equivalent loan in West African CFA francs — IFC’s first local currency financing in Mali and the first in the country to be supported by the IDA PSW in the manufacturing, agribusiness, and services sector.

Through the IFC investment, CCM will cut production costs by up to 20 per cent and allow it to better satisfy the increasing local demand for quicklime and agricultural lime. The country supplies agricultural lime to farmers in neighbouring Côte d’Ivoire, Guinea and Senegal.

Increased access to agricultural lime in Mali will help boost productivity where an estimated two-thirds of the country’s 2.4 million hectares of agricultural land suffers from soil acidity.

Mali has the Agency for Investment Promotion (API) which is a one-stop-shop to make business registration easier and to promote foreign and local investments. The agency serves both Malian and foreign enterprises of all sizes.

Investment opportunities in Mali are in sectors with high growth rates enabled by a favourable environment including advantageous tax incentives to support the start-up and growth of businesses.

Mali has also implemented bold land policies to facilitate access to agricultural land.  In agriculture, Mali and its neighbouring countries have nearly 153 million inhabitants which creates a booming local and sub-regional market.

The country’s comparative advantages in terms of land, climate, water, and labour are undeniable. Making the agricultural sector the engine of its economy is a major challenge for Mali but the country is seeking to modernize the sector through value addition to create jobs with the processing of raw materials.

Just as with many other countries seeking to grow their economies, energy plays a catalytic role in industrial growth in Mali. The country’s solar, hydro and biomass are all natural resources to be developed for the achievement of energy independence.

Mali even has the potential to produce enough energy for the entire region.

The country that is mainly young population at 67 per cent is growing at 3.1 per cent a year. AfDB notes that 44,520 jobs are created every year but unfortunately cannot absorb labour supply which is 300,000. The workforce’s poor qualifications are aggravated by the discrepancy between the supply of training and the requirements of the labour market.

Improving the political and security situation should allow for real GDP growth of 4.9 per cent in 2020 and 2021. In March 2019, Mali adopted a National Strategic Framework for Economic Revitalization and Sustainable Development 2019–23 and is working to implement the Plan for Public Finance Management Reform 2017–21.

The creation of the African Free Trade Zone and the ECOWAS single currency (eco) zone should strengthen Mali’s integration into the region. To promote the private sector, the government launched the 5.5 billion CFA francs Economic Infrastructure Programme aimed at creating 8,700 kilometres of roads and six bridges by 2023.

Mali has faced a security and humanitarian crisis since 2012, with armed groups occupying two-thirds of the national territory and with 5.2 million people short on food.

The economy depends heavily on gold and cotton which make up 86 per cent of exports. Value chains are poorly developed and only 3 per cent of cotton is processed.

With little diversification, the economy depends on the prices of raw materials on international markets. The accumulation of payment arrears for domestic debt presents a risk of stalling economic activity and the private sector.

Since 2014, Mali’s economy has been on the upswing with over 5 per cent growth each year.  The government is developing a new regulatory framework for public-private partnerships and hopes to welcome investors in the infrastructure, telecommunication, service, mining, as well as agricultural sectors.  The investment climate is benefiting from the financial and economic reform processes that accompany this institutional lending.

All these are investment opportunities the West African nation is offering to those willing to invest in the various sectors.