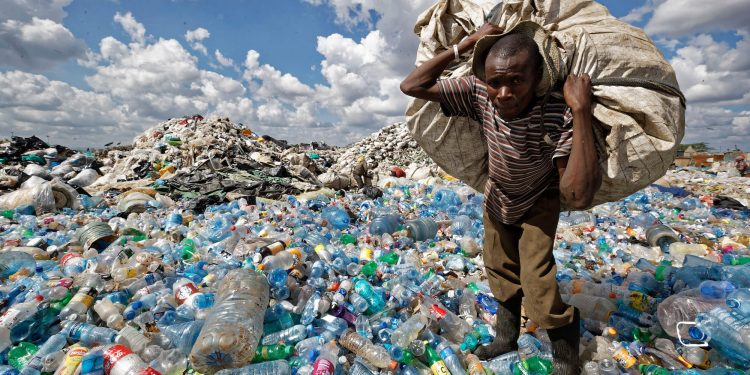 Plastic pollution is a big challenge for Africa. 14 resolutions were adopted at the 5th UN Environment Assembly in Nairobi in March 2022. [Photo/Courthouse News Service]

There is no place on Earth that is not affected by plastic pollution today, from deep-sea sediment to Mount Everest.

14 resolutions were adopted at the 5th UN Environment Assembly in Nairobi, with the goal of enhancing efforts to meet the Sustainable Development Goals while also protecting nature.

International environmental governance is overseen by the United Nations Environment Assembly (UNEA), a group of 193 countries that meets every two years.

Plastic pollution will be tackled by an Intergovernmental Negotiating Committee, which will have the responsibility of drafting an international legally binding accord.

According to UN Environment Program (UNEP) Executive Director Inger Andersen, this is the most significant environmental multilateral agreement since the Paris agreement.

According to Norway’s Minister for Climate and Environment, Espen Barth Eide, “multilateral collaboration at its best” is demonstrated by “the UN Environment Assembly.” Is plastic pollution a public health crisis?” Having made today’s pledge, we are now officially on the path to a cure.”

There is no place on Earth that is not affected by plastic pollution today, from deep-sea sediment to Mount Everest,” said UN Deputy Secretary-General Amina J. Mohammed. We need a multilateral solution ­from source to sea—to save the world. It would be a great first step if there was a legally binding global agreement against plastic pollution.”

Resolutions on plastic pollution and sound waste management are supported by a second crucial resolution, which calls for the establishment of an ambitious science policy panel on pollution prevention. The Covid-19 epidemic has been made worse by the widespread use of single-use plastics and disinfection chemicals, as acknowledged in the Ministerial Declaration.

With the UN Decade for Ecosystem Restoration as a guide, the third significant-resolution adopted by the Assembly focuses on nature-based solutions: activities to protect, conserve, restore, sustainably use, and manage ecosystems. Communities and indigenous peoples’ rights must be protected, and UNEP should assist in the implementation of these solutions.

According to a resolution on minerals and metals, solutions should be developed to increase the environmental sustainability of these products over their whole existence.

Protect, conserve, restore, and sustainably use lakes while incorporating them into national and regional development plans are the goals of the resolution on sustainable lake management.

Environmental factors should be taken into account in all infrastructure plans, according to a resolution on sustainable and resilient infrastructure

If we don’t change our relationship with nature by adopting a holistic approach like One Health, we’re at risk of future pandemics and other health hazards, the Ministerial Declaration stated.

An animal welfare resolution in this context urges the Member States to safeguard animals, their habitats, and the needs of animal care.

Another resolution on biodiversity and health called on the Member States to decrease the health hazards connected with the trade in live animals seized for the purposes of food, captive breeding, pharmaceuticals, and the pet trade through regulation and sanitation regulations.

As a result of changes in land and sea use, exploitation of nature, unsustainable consumption, and production patterns and climate change, as well as invasive alien species, the Ministerial Declaration stressed the urgent need to stop the global decline of biodiversity and the fragmentation of habitats, which is unprecedented in human history.

Furthermore, it was decided to expedite efforts to drastically reduce nitrogen waste from all sources, primarily through agricultural methods and save an estimated US $100 billion per year.

By including biodiversity, climate change, and pollution concerns in all policies and instruments around the world’s environment ministers have committed to an inclusive and sustainable recovery when COVID-19-related investments have failed to promote environmental goals.

A resolution on environmental issues was passed by the UN General Assembly in order to improve efforts to create global economic recovery that is long-term, resilient, and inclusive of all people.

In addition, the Assembly passed resolutions and decisions on the dates and locations for UNEA-6, as well as the future of the Global Environment Outlook (GEO) as well as equitable geographic representation and balance in the UNEP secretariat.

In-person and online, UNEA-5.2 takes place over three days, and it follows a previous online UNEA-5 gathering last year. More than 3,000 people from 175 countries, including 79 ministers and 17 high-level officials, attended the conference in person and online.

A two-day Special Session of the Assembly to commemorate the 50th anniversary of the UNEP will follow the Assembly. Member States are expected to address how to build a resilient and inclusive post-pandemic world and to endorse a draft Political Declaration at this session.

I have 10 years of experience in multimedia journalism and I use the skills I have gained over this time to meet and ensure goal-surpassing editorial performance. Africa is my business and development on the continent is my heartbeat. Do you have a development story that has to be told? Reach me at [email protected]change.africa and we can showcase Africa together.