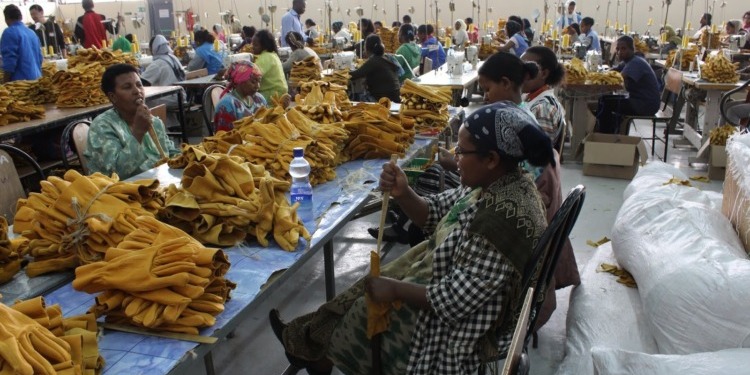 People in factory. The 2021 Africa Industrialization Day comes just a week after the culmination of the COP26 in Glasgow. [Photo/ China in Africa]

Africa’s green industrial revolution will form the bedrock of discussions at the COP26, owing to the urgency in safeguarding the future of the continent.

The 2021 Africa Industrialization Day (AID) comes in a week after the culmination of the much-anticipated twenty-sixth session of the Conference of the Parties (COP26) to be held in Glasgow, United Kingdom.

With the continent on the cusp of the fourth industrial revolution but still within the United Nations 2016-2025 Third Industrial Development Decade for Africa (IDDA III).

Africa’s green industrial revolution will form the bedrock of discussions at the COP26, owing to the urgency in safeguarding the future of the continent in the wake of the detrimental climate change crisis whose effects continue to reverberate across the continent.

Africa Industrialization Day is marked each year on the 20th of November to raise global awareness of the challenges faced by the continent with regard to industrialization. The key objective of the day is to stimulate industrial transformation and mobilize both African leaders and international organizations to advocate for the accelerated and sustainable industrialization of Africa.

African countries have been stuck in a conundrum on how to drive the much-needed economic transformation by steadily sticking to its industrialization path, whilst adhering to the required climate change initiatives of lowering the carbon footprint; the answer has been pretty succinct, to embrace at full tilt the age of a green industrial revolution. An era marked by the accelerated shift to carbon-intensive economic and industrial sectors onto greener trajectories through the integration of green industrial policy approaches and investments in green industries.

One of the goals under the African Union’s (AU) Agenda 2063: The Africa We Want is transformed economies with a key priority area being Science, Technology and Innovation (STI) driven manufacturing, industrialization and value addition, coupled with economic diversification and resilience. This is well-aligned to Goal 9 of United Nations Sustainable Development Goals (SDGs) on building resilient infrastructure, promoting inclusive and sustainable industrialization and fostering innovation. Inarguably, the C-19 pandemic has disrupted industries, trade and supply chains on a massive scale with African manufacturers facing a 10% decline in output, threatening their survival and leading to long-lasting consequences in the sector. The African Development Bank (AfDb) has the ambition to help double Africa’s GDP by 2025 thereby increasing its industrial GDP to US$1.72trillion, with overall GDP increasing to US5.6trillion by handing the mantle to the private sector to effectively drive the industrialization process in the continent.

To achieve this, the Bank projects to fully implement its six flagship industrialization programs by facilitating the cumulative investment of US$56billion in the course of the decade. These include: fostering successful industrial policies by providing policy advisory services and technical assistance to governments and funding key PPP projects; catalyzing funding into infrastructure and industry projects by increasing and channelling funds into GDP catalytic programs such as infrastructure and industrialization projects, by public and private operators; growing liquid and effective capital markets by improving access to market finance for African enterprises; promoting and driving enterprise development by facilitating access to financing by expanding SME-focused lines of credit, providing technical assistance to SME development institutions and building SMEs’ capacity via linkage programs with private sector investment; promoting strategic partnerships in Africa by linking African enterprises and major projects, with potential partners and investors through promotional activities notably the African Investment Forum; developing efficient industry clusters by supporting governments in developing efficient industry clusters across Africa, through technical assistance and funding in implementation and monitoring.

One of the key highlight areas projected to be dwelled upon at the COP26, is Africa’s adoption of green manufacturing in the ultimate race to net-zero emissions by 2050.

Just what is green manufacturing and what does it mean for the continent?

Green manufacturing refers to establishing renewable production processes and environmentally-friendly practices in manufacturing businesses. This encompasses inculcating practices such as the utilization of renewable energy, pollution reduction by moderating emissions, recycling and reusing materials and conservation of natural resources by manufacturing plants. Albeit marred with difficulties, green manufacturing in Africa is possible and the continent stands to greatly benefit from the transition. It will promote inclusive economic transformation through domestic manufacturing and a commodity-based industrialization process, capitalizing on the continent’s resources and opportunities presented by the dynamic nature of the global structure of production.

Green industrialization has been identified as the holy grail of Africa’s socio-economic transformation; infusing green initiatives into value chain activities for instance, during sourcing and processing of raw materials to the marketing and selling of finished products. The Economic Commission for Africa (ECA) economic report on Greening Africa’s Industrialization, deduces that it is imperative for African countries to identify green industrialization entry points, set policies that support green industrialization and mobilize resources from the public and private sectors, as it is a precondition for sustainable and inclusive growth.

According to the recently released McKinsey’s Africa’s Green Manufacturing Crossroads report, Africa’s green transition could create a net 3.8 million jobs. However, this warrants an initial investment of $2 trillion in manufacturing and power. The report estimates that by 2050 African emissions from manufacturing could more than double, owing to Africa’s vulnerability to climate change; should commitments to decarbonize emissions not be formulated. Furthermore, the report indicates that Africa’s lack of industrial development puts it in a strong position to leapfrog high emitting technologies and develop low-carbon manufacturing without incurring expensive future costs of transitioning from fossil fuel-based factories to renewables.

The McKinsey Report projects that without solid commitments to decarbonize emissions from manufacturing, Africa could almost double to 830 megatons of carbon dioxide by 2050. Currently 440 megatons of carbon dioxide is produced by African manufacturing, with almost a third coming from cement production at 32 per cent of the total manufacturing emissions, 13 per cent by coal-to-fuel plants operated by Sasol Ltd in South Africa; petroleum refining 5 per cent, iron and steel 6 per cent and ammonia 4 per cent. South Africa is the continent’s biggest manufacturing emitter standing at 37 per cent followed by Egypt at 20 per cent, Algeria 10 per cent and Nigeria 7 per cent. Decarbonizing existing industries would need $600billion and $1.4trillion would be needed for new green businesses. An all-out abatement effort could see the manufacturing sector cut emissions by 90 per cent to reach net zero by 2050.

The new industries that could be developed range from bioethanol and cross-laminated timber to electric vehicles and green hydrogen. To achieve this, Africa would need to tap into green finance instruments such as carbon credits, green bonds, green insurance and payment for performance linked to green outcomes. The report further recommends that the two technologies that would help Africa attain this target are carbon capture and storage and the production of green hydrogen.

The SWITCH Africa Green programme funded by the EU is an initiative that supports governments and the private sector in African countries such as Burkina Faso, Ghana, Kenya, Mauritius, South Africa and Uganda in the transition to an Inclusive Green Economy (IGE). The programme is implemented by the United Nations Environment Program (UNEP), in collaboration with the United Nations Development Program (UNDP) and United Nations Office for Project Services (UNOPS). The program aims to support countries to achieve sustainable development based on Sustainable Consumption and Production (SCP) patterns while generating growth, creating decent jobs and reducing poverty. Having narrowed down to four priority areas, the program supports the production of renewable energy, energy-use efficiency, water-use efficiency, green business and eco-entrepreneurship intended to reduce the environmental impact of the sector and enhance economic efficiency.

In light of this, South Africa has set pace by making a submission of its NDCs to mitigate GHG emissions which shall further be discussed at the COP26 Summit, of its support of repurposing and repowering aged coal plants whilst investing in and adopting new low carbon generation capacity, transmission and distribution infrastructure. Furthermore, exploiting Africa’s opportunities for green industrialization involves the urgent establishment of new pledges by African governments and corporations, to garner the momentum of the adoption of green manufacturing, embarking on a bold green agenda, driven by private sector-led investments in industrial transformation, to unlock their full potential. To make green manufacturing a reality, untapped renewables such as solar, wind, hydropower and geothermal need to be harnessed.

The United Kingdom launched the blueprint of its Green Industrial Revolution in November 2020, to build back better by accelerating its path to net-zero and supporting green jobs. Africa can undoubtedly borrow a leaf from its ten-point plan, formulated towards the achievement of this ambitious goal. The Plan encompasses advancing offshore wind, driving the growth of low carbon hydrogen, delivering new and advanced nuclear power, accelerating the shift to zero-emission vehicles, green public transport like cycling and walking, jet zero and green ships, greener buildings, investing in carbon capture, usage and storage, protecting the natural environment and green finance and innovation. Indeed, a green path towards industrialization is the only viable option for Africa’s continued development.

Read: The potential of the fourth industrial revolution in Africa