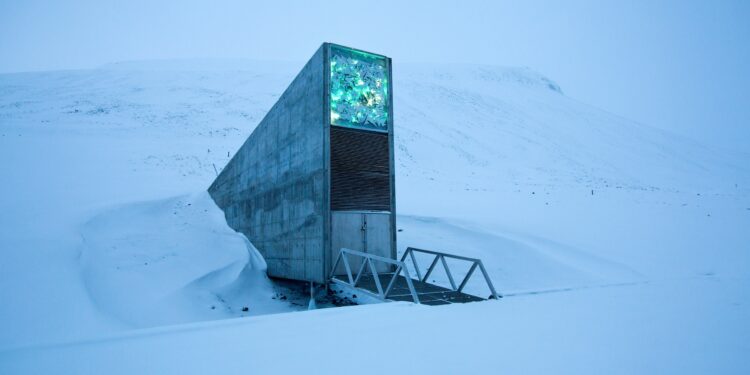 The Global Seed Vault on Spitsbergen, Norway. The African farmer will need more than goodwill to survive any seed doomsday scenario. [Photo/Time]

In Africa, the idea of having a seed bank on the scale of the Global Seed Vault is unknown since farmers have for decades been using seed banks for their consecutive crop production activities.

For decades, the world has heard about the doomsday vault located on an island in Norway.

The location of the Global Seed Vault on Spitsbergen is an icy mountain that is part of Norway’s Svalbard archipelago.

The vault, which is essentially a massive safe deposit box for seeds, houses what is regarded as “the world’s largest collection of agricultural biodiversity”. The facility is said to be host to 13,000 years of agricultural history, according to Brian Lainoff, the former Crop Trust lead coordinator of partnerships at the seed bank.

This Svalbard seed bank sounds like a farfetched idea since imagining a world where there are no plants or seeds is hard to comprehend. But, this may not be so since the effects of climate change are hastening the process of biodiversity loss including the loss of food crop seeds.

In Africa, the idea of having a seed bank on the scale of the Global Seed Vault is unknown since farmers have for decades been using seed banks for their consecutive crop production activities. The sad reality is that this practice may be infeasible in the coming years since the changing climatic conditions are pushing the continent over the ledge with ever-decreasing farm productivity.

A report released by the UN’s International Fund for Agricultural Development (IFAD) in October 2021 shows that the biodiversity doomsday is nigh for Africa.

According to a report, staple crops in eight African countries might decline by as much as 80 per cent by 2050 if temperatures continue to rise driven by climate change. The result of this might be a devastating effect increasing poverty and reducing food supply. The most affected are the world’s poorest, a majority of whom are in Africa. This calls for urgent action for disadvantaged farmers to help them adjust their farming methods and produce to ensure food security.

The report: What Can Smallholder Farmers Grow in a Warmer World? Climate Change and Future Crop Suitability in East and Southern Africa, shows that climate change could have a devastating effect on the productivity of staples and cash crops grown by small-scale farmers in these countries. In Zimbabwe and Angola, for instance, if no changes to agricultural practices or global policies are made, their annual maize yields could decline by 77 per cent in 2050.

Read: The 1.7M dollar buzz from the bees in Tanzania

Drought conditions, erratic weather patterns and a temperature increase of 2°C remain a big threat to African countries and their ability to sustainably feed their populations.

Some effects of climate change globally include:

While climate change remains the single biggest threat to smallholder farmers in Africa, another ugly scenario has reared its head making an already bad situation dire: seed patenting and the resultant exorbitant costs.

This practice, which is being driven by multinationals, is disadvantaging smallholder farmers due to the costs of acquiring the seeds and the contamination of indigenous seeds with the new seeds which are usually produced under the genetically modified organism (GMO) technology.

The paper: Owning the World’s Seed Supply: How Seed Industry Mergers Threaten Global Food Security notes that plant diversity has become a necessity if global food security is to be assured. Mahoney notes that the “consolidation of the key players in the seed industry noticeably affects the price and diversity of seeds”.

“The seed sector is becoming dominated by large multinational firms, making it difficult for smaller companies to compete globally. Patents provide these firms the most power over seed production. Comprehensive seed patent regulations are essential to handle expected food shortages and disparities in light of climate change,” she notes.

With these glaring challenges for the African farmer, is there any hope of surviving any seed doomsday scenario?