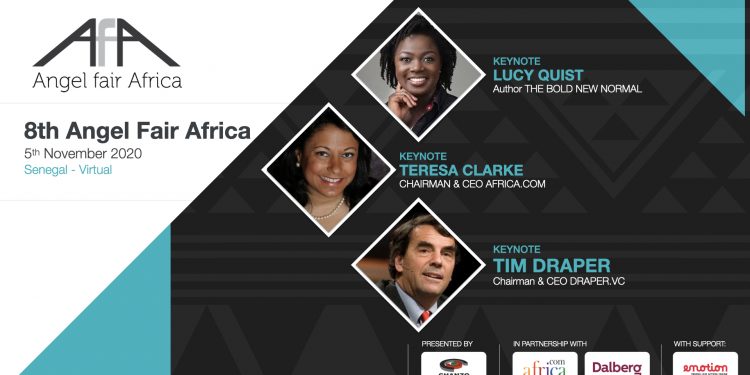 This year’s event will bring investors, entrepreneurs and ecosystem players unto the virtual platform to do deals, network and share experiences.

The Chanzo Capital has partnered with Africa.com to make virtual the 8th Angel Fair Africa and because the new normal is making everything virtual, the theme of this year’s event is “doing deals in a virtual environment”.

The event which was scheduled to be held in Senegal will be held on 5th November 2020 on the www.virtualconferenceafrica.com platform.

“This year, we are launching the Africa Virtual Accelerator (AVA) to replace the physical bootcamp which prepares the entrepreneurs to be investor ready. Angel Fair Africa chose Senegal for the dynamism of its entrepreneurial ecosystem.” a press statement from the organization read in part.

Angel Fair Africa is an event that brings together accelerators, incubators and emerging businesses from across the African continent and investors to do deals.

According to the statement, the objective of the Africa Virtual Accelerator is to showcase Dakar as the francophone hub for investors, entrepreneurs and Entrepreneur Support Organizations while facilitating cross border deals.

Angel Fair Africa in partnership with Africa.com hosted a virtual pitch competition in May from which six African startups pitched to judges who honoured three winners with cash prizes, mentoring sessions and media packages.

This year’s event will host Lucy Quist, author of the book, “The Bold New Normal” who will have a conversation on situating the bold new normal within the new normal of “virtuality” and how that can enable deal-making in Africa.

Teresa Clarke, Chairman and CEO of Africa.com will follow with a lunchtime fireside chat on how she exemplified the bold new normal by leaving Goldman Sachs in New York, relocating to Johannesburg, South Africa to build Africa.com from the ground up into a media empire, which last year acquired iAfrica.

Tim Draper will conclude by sharing his bold new normal of investing globally from Silicon Valley into companies like Baidu, Tesla, Hotmail, Skype, etc which all redefined their industries.

This year’s event will bring investors, entrepreneurs and ecosystem players unto the virtual platform to do deals, network and share experiences.

Evelyne Dioh SIMPA, CEO of WIC Capital said “bringing together a diverse mixture of the business community, innovators, and investors within Senegal, across Africa and the world would create the right environment to facilitate strategic investment, foster partnerships and strengthen the network that would catalyze the African ecosystem and drive change”.