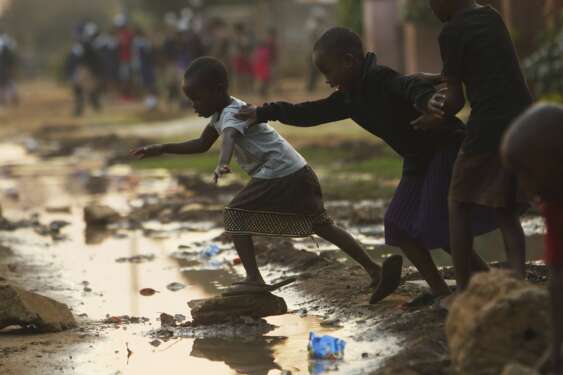 Children playing in an area with raw sewage in Zimbabwe. The Sanitation and Wastewater Atlas of Africa aims to help policymakers accelerate change and investment in the sector. [Photo/APN News]

By 2050, 75 per cent of the global population will be living in urban centres

Migration is significantly contributing to Africa’s urban growth as people move from rural areas in search of better economic opportunities. Some are also fleeing the effects of environmental degradation which has led to lost livelihoods for those who rely on agriculture.

As the economies deteriorate continent-wide, the mass movement of people means that the capacity of urban towns to cater for the increasing demands by migrants is stretched beyond the original plans.

This means that providing employment and access to basic amenities are limited which leads to breakdowns in service provision and delivery.

By 2050, 75 per cent of the global population will be living in urban centres with sub-Saharan Africa being the world’s fastest urbanizing region.

This is according to a 2014 report by the United Nations Population Division which projected that most of this urban growth will be concentrated in Africa and Asia.

But, is Africa ready for this growth?

To help the continent achieve milestones in regard to sanitation, the African Development Bank (AfDB), the UN Environment Programme (UNEP) and GRID-Arendal have released the inaugural Sanitation and Wastewater Atlas of Africa, a tool to benchmark and propel Africa’s progress towards Sustainable Development Goals on safe sanitation and wastewater management.

The Atlas aims to help policymakers accelerate change and investment in the sector.

With the sanitation sector barely touched, the Atlas which is the result of four years of collaboration assesses progress and highlights opportunities where investment in sanitation and wastewater management can improve health and spur economic growth.

The publication incorporates maps, graphics and profiles of all African countries, including analyses of their water resources and provision of basic services. It also explores the links between sanitation and wastewater and ecosystem health and human health and discusses frameworks and circular economy approaches that can lead to better infrastructure and systems.

AfDB’s Acting Vice President for Agriculture, Human and Social Development Wambui Gichuri says that the continent cannot have a healthy society without adequate access to safe water, sanitation and hygiene.

The AfDB has invested more than US$6 billion in sanitation and hygiene improvements in the past 10 years, but much more financing is needed from the private sector, development finance institutions, governments and other sources.

According to the report, more than half of the population in 34 out of 38 sub-Saharan Africa nations lack access to basic handwashing facilities. It recommends investment in the necessary policies, infrastructure and human skills capacities to operationalize actions towards the achievement of goals and targets in the 2030 Agenda, including those for sustainable sanitation and wastewater management.

The Covid-19 pandemic has sharpened an already existing need to upgrade Africa’s water and sanitation infrastructure and the report urges African governments to incorporate sanitation and wastewater programmes into their post-Covid-19 strategic planning.

UNEP’s Head of Marine and Freshwater Branch Leticia Carvalho says that as the world seeks to recover better after Covid-19, prioritizing wastewater and sanitation infrastructure in Africa is critical. Sustainable Development Goal 6, which calls for making water and sanitation available to everyone, is within reach by 2030 if needed resources are committed.

The Sanitation and Wastewater Atlas of Africa provides the tools for policymakers to focus on this important challenge.

In addition to advancing SDG Goal 6, the Atlas is expected to promote the African Union’s Agenda 2063 as well as the Africa Water Vision for 2025, an initiative of the UN Economic Commission for Africa, AfDB and the AU.

The report offers a wealth of information on practical and transformative solutions for wastewater management and the provision of sanitation services, which can help to boost public health and secure the sustainability of Africa’s natural resources, according to Clever Mafuta, Head of the Waste Programme at GRID-Arendal, a Norwegian non-profit organization established to support the work of UNEP.

According to the Centre for Strategic and International Studies (CSIS), many governments in Africa are collaborating with international financial institutions in implementing projects addressing flood risks and the associated consequences in urban areas. Of particular importance are informal settlements.

“These areas, also referred to as slums are often reliant on non-existent or incompetent risk-reduction services. Incompetent governing bodies or a general failure to incorporate disaster risk reduction into urban planning or land-use policy is to blame for this,” notes CSIS.

The CSIS adds that with current trends, the growth rate of these areas substantially exceeds attempts at urban upgrading.

“Cities and municipalities cannot properly manage urbanization or disaster risk without first containing the expansion of these settlements,” adds CSIS.

As a stop-gap measure to contain the disasters that come with flooding, governments across Africa have to first tame the growth of slums by ensuring that there is adequate infrastructure to support the anticipated growth.

If not, the challenges will only keep getting worse.

Many countries in Africa did not achieve the Millennium Development Goal (MDG) for increasing access to water and sanitation.

To compound the problem further, sanitation in urban areas is further complicated by the connection between water supply, stormwater drainage and solid waste.

An increasing the population means that the structures to provide the services like drainage systems cannot withstand the pressure unless upgrades happen consistently. However, upgrading drainage systems would mean spending millions of dollars since they have been neglected for several decades.

The pressure occasioned by the migration means that these systems will definitely break leading to a chaotic situation if countries do not address the sanitation challenges now.

Countries like Kenya have begun making amends and in April 2019, the county government of Nairobi began the process of unclogging drainage systems in several parts of the city. This was in anticipation of the long rains and the exercise was meant to avert potential disasters including flooding and waterborne diseases.

During the launch of the programme, leaders said that the Nairobi City County Solid Waste Management Act 2015 would be fully enforced to ensure the environment remained clean and safer to avoid clogging of the drainage systems that eventually lead to flooding and disasters.

While this move came after several years of disastrous occurrences especially with heavy rains, it is evident that reactive governments will suffer the consequences of poor planning.

Uncontrolled developments are a sore thumb for many governments since they encroach on rivers and other riparian lands which wreak havoc during periods of heavy rains.

While Nairobi is just a small part of the continent, it is used as a benchmark by many other sub-Saharan African cities since it is the East African economic hub.

With the massive failure to control and manage drainage systems where raw sewage is a common sight, could it be that Africa’s time of reckoning with the menace is nigh?