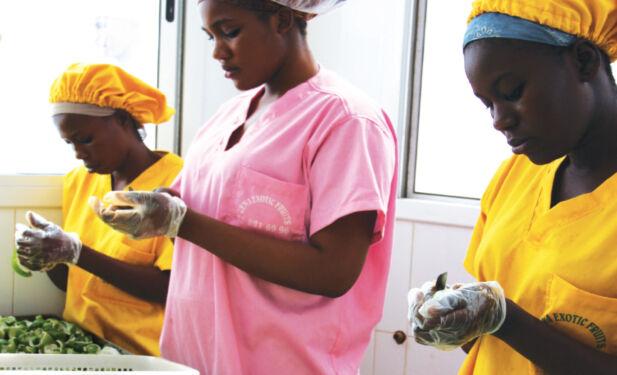 Workers preparing agricultural produce in a value addition process by an SME. Tanzania can provide tax exemptions which could lead to a decrease in production costs. [Photo/Infodev]

The small and medium-sized enterprises (SMEs) sector is one important contributor to Tanzania’s long-term development agenda.

This East African nation has been on a journey towards becoming a middle-income country with the economy growing by an average of 6.5 per cent per year in the last decade, going by estimates from the World Bank and other institutions.

There are an estimated three million enterprises in Tanzania’s SME sector which contribute 27 per cent of the overall GDP according to the Tanzania Development Vision (TDV) 2025.

As of 2020, Tanzania’s SMEs made up about 50 per cent of its GDP with most of these estimated at more than 50 per cent involved in the agricultural sector. The nation has more than one million entrepreneurs in the SME sector but the unfortunate fact is that many small businesses rarely get to become medium businesses.

To support SME growth in Tanzania, government policies and regulations should be put in place while financial institutions should reform their loan structures to accommodate SMEs in their different stages of growth.

Since the SME sector is a big contributor to the country’s GDP, Tanzania has to do more to empower the agricultural sector which is its backbone.

Generally, the key constraints towards SME development include unfavourable legal and regulatory frameworks, underdeveloped or the complete lack of infrastructure, poor business development services, limited access to financing and ineffective institutional support framework.  The biggest of these constraints remains access to finance which also happens to be a critical aspect in SME growth.

In addition to the limited access to finance, a majority of SMEs in Tanzania lack effective use of financial products and services which has become a major barrier to growth. Lack of access to finance by SMEs leads to financial services providers (FSPs) adopting strict requirements around credit history, formal registration and collateral among others.

In 2018, Tanzania was ranked 13th out of 15 countries in Sub–Saharan Africa in regard to credit accessibility. The East African nation is an emerging market with many enterprises struggling with restricted credit access. So dire is the credit access situation that only 15 per cent of the general population can formally access credit through banks.  To make up for the credit deficit, Tanzanians turn to friends and family to access loans. However, this can barely address the enormous need which will continue stymying growth in the sector unless urgently addressed.

A 2017 study by the University of Dodoma showed that banks and microfinance institutions have enough liquidity to offer SMEs loans but the entrepreneurs regard these formal loans to be high risk. This is due to, among other concerns, the strict loan conditions, high interest rates and the demand for numerous collaterals to secure these loans. Noteworthy is that most new entrepreneurs in the sector are customarily young and without much which could be used by the lenders as collateral. The demand for collateral means these entrepreneurs are locked out of a sector that could unlock Tanzania’s economic growth potential.

An estimated 95 per cent of all businesses in Tanzania are in the SME sector making it such an important contributor to the economy and which Tanzania cannot afford to ignore. The Tanzania Chamber of Commerce, Industry and Agriculture (TCCIA) notes that SMEs are represented by about 35 per cent in the country’s GDP and despite this significance, the potential of the SME sector is yet to be fully discovered.

This means that due to several constraints existing, the industry’s development is hampered and remains underdeveloped.

The SME sector in Tanzania is the engine of economic growth but this engine is idling instead of revving the East African economy of 60 million. To get this engine powering the growing economy, the government should ensure that SMEs have a conducive environment where they can easily provide practices of business competitiveness and strategy.

With a weak environment, SMEs are less likely to thrive and will remain incapable of adapting to market demands since they cannot read signs or implement changes for suitable investments.

It is important for the government to be involved since its policies and regulations are not as robust as they should be. In addition, enforcement remains weak making it harder for SMEs to hit growth milestones in good time.

Tanzania has an estimated 2.7 million SMEs with about 60 per cent of these enterprises located in urban areas. Most of them employ less than five people. Generally, the SMEs have an annual turnover of less than US$2,000 and to cushion themselves, they have established a survival strategy, according to the American Journal of Economics’ 2020 report.

The journal notes that there are more than three million SMEs (de facto MSMEs) employing over 5.2 million Tanzanians. Some 45 per cent of these MSMEs are located in urban areas with the remaining 55 per cent domiciled in rural areas.

Tanzania’s industrial sector has 25,000 enterprises with 97 per cent of these having ten or less employees. This is in comparison to 40 large manufacturing enterprises which have more than 500+ employees and covering about a third of employment in the industry.

To enable the sector to thrive, the Tanzanian government should put in place new tax regulations favouring SMEs as opposed to measures that stifle growth in the sector.

With agriculture being the largest of the SME sectors, unfavourable tax regimes mean that they take away from it being the backbone of the Tanzanian economy. A regime guaranteeing success would increase competition in the sector which would see a ripple growth not just for businesses but also for revenue collection.

To sweeten the deal, the government can provide tax exemptions which could lead to a decrease in production costs. In addition, imported products should be assigned higher tariffs to help promote local products and enable them to have an advantage in the market.

With increased sales locally, Tanzania’s SMEs could grow in competitiveness internationally which could lead to the country earning more from the sector than it is currently doing.

The revival of old industries could also assist with increasing production and employment opportunities.

On financing, banks and other microfinance institutions should create products for SMEs to enable their expansion. In effect, this means these financial institutions could issue credit based on each business’ unique needs.