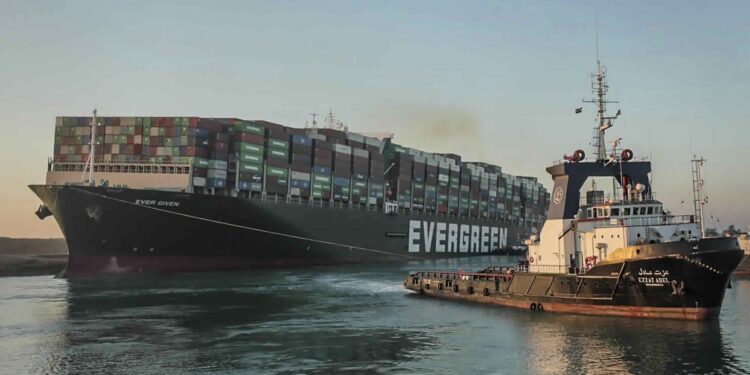 The Suez Canal's President, Admiral Osama Rabei, stated that revenues had increased by 12.8 per cent compared to US$5.6 billion in 2020.

In a report released on January 1, 2020, annual revenue generated from Egypt’s Suez Canal has hit a record high of US$6.3 billion.

The Suez Canal’s President, Admiral Osama Rabei, stated that revenues had increased by 12.8 per cent compared to US$5.6 billion in 2020.

The 2021 record-breaking revenues come at a time when the shipping industry is still experiencing the pressure exerted by the Covid-19 pandemic.

The canal began operations in 1869. It has been a source of foreign exchange and national pride for Egypt. It brings about US$6 billion to the country every year. In 2021, 1.27 billion tonnes of cargo were shipped through the canal.

Every day, an average of 50 ships pass through the canal, carrying goods worth more than US$9.5 billion. The vessels carry goods such as oil, cement, consumer goods, electronic hardware, furniture, vehicles and even live animals.

In March 2021, the canal was blocked for six days by a huge container ship that sails under the flag of Panama, the Ever Given. High winds that resulted in low visibility had blown the ship off course, closing the one-way stretch. The world’s largest container ship threatened to disrupt the global shipping system.

Three days later, 369 ships were waiting to pass through the canal. Crude oil worth US$400 million was halted by the blockage, and 6.3 million barrels were stranded.

Egyptian authorities had seized the Ever Given and demanded US$916 million in compensation from its owner, Shoie Kisen Keisha, for the ship to be released.

The Suez Canal Authority (SCA) head later dropped the claim to US$550 million. The ship’s insurers, however, said that the compensation claims were unjustified.

Egypt lost between US$12 million and US$15 million worth of revenues every day when the canal was blocked. One of the SCA’s rescue workers was reported dead in the efforts to salvage the Ever Given.

The ship was released three months later after compensation was agreed between SCA and the Evergreen Company that owns the Ever Given.

Future plans for the Suez Canal

The SCA plans to raise transit tolls by 6 per cent beginning in 2022, with an exception for tourist vessels and liquefied gas carriers.

In May 2021, Egypt’s President, Abdel Fattah Al-Sisi, confirmed the expansion of the Suez Canal to run from potential blockages in the future.

The 30-kilometre long area is to be widened by 40 metres to the east and deepened from 66 feet to 72 feet.

The expansion is intended to increase efficiency, increase navigation safety, and reduce the transit time of vessels.

“The expansion tabled by the SCA will help in reducing the potential risk of ships getting stuck, but it will not completely erase it,” said Loaniss Theotokas, a professor in the Department of Maritime Studies at the University of Piraeus, Greece.

The government intends to bring 1.4 million acres under cultivation in the area around the Suez Canal.

Alternative routes to the Suez Canal

The Suez Canal offers the shortest maritime route between Europe and the regions bordering the Indian Ocean and the western Pacific Ocean.

Navigation around the Cape of Good Hope. This means going around the African continent. The route is about 7,000 km longer to move from Europe to Asia as compared to the Suez Canal. It adds one to two weeks of navigation.

It was proving to be a better alternative as it saved tens of thousands of euros due to the heavy tolls. Egyptian authorities, in response, currently grant large deductions in tariffs of discounts up to 75 per cent for certain vessels.

The International North-South Transportation Corridor (INSTC). It would facilitate trade from Mumbai to Moscow via Iran and the Caspian Sea. It is a rail and road transportation system that is 7,200km long. When compared to the Suez Canal route, it saves between 30 and 60 per cent on transportation costs. It would also reduce travel days from 40 to 20. It is still under implementation.

Transport by plane. It costs an average of US$28 to transport a kilo by plane, compared to US$6 for transport by container. It is a lucrative alternative.

The Panama route through Russia saves on time and cost but can only be used in a period of less ice, which is only three to four months out of a year. Experts warn against the route because shipping will increase temperatures, melting the ice and glaciers along the route.

With all the options, the Suez Canal still proves to be a better alternative, and it will serve Egypt’s revenue for a longer period of time.