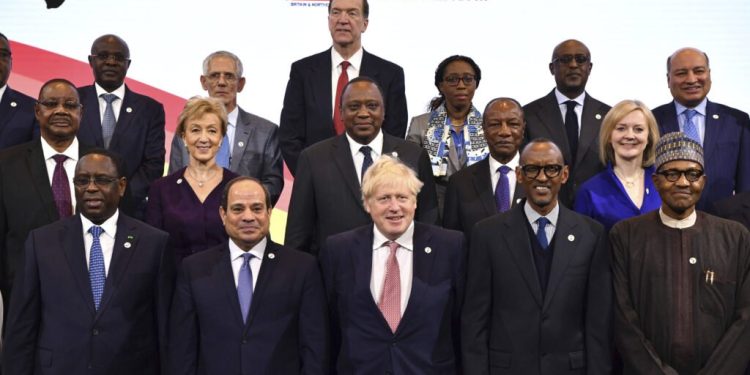 The United Kingdom (UK) Africa Investment Summit is another platform that enhances the ability of Africa to forge meaningful partnerships with UK investors: Photo by The Africa Report

The United Kingdom and Africa have a rich history and fascinating relationship.

In addition to being governed by one of the world’s most powerful economic blocs, most development finance currently passes through the UK systems. UK-Africa relations have undergone several variations across time and space. A US-based think organisation called Brooking claims that over the past ten years, Africa’s contribution to UK imports has decreased from 2.1 per cent to 1.7 per cent.

As part of the UK’s effort to oppose authoritarian regimes, it not only provides Africa with development cash but also shapes its democracy by dictating how human rights and civil liberties should be implemented in space and time (Carnegie Endowment International Peace).

The data point to interesting scenarios that consider the state of UK-Africa relations. Despite having trade agreements with 16 African nations, trade between the UK and Africa has been dropping since 2012, when it peaked at US$43 billion. By 2020, it is expected to be around one-third that amount, or US$14 billion.

Additionally, as the UK’s bilateral funding to African countries was reduced by 66 per cent in 2021 due to the possibility that it may not continue, support for Africa could diminish. These modifications do not negate the UK’s outstanding support of African development initiatives.

2019 saw a ten-year record for net UK foreign direct investment (FDI) flow to Africa of approximately US$14 billion. The Carnegie Endowment notes that despite this, UK investment in Africa is spread throughout several industries, with 83 per cent of it concentrated in the extractive industries of mining, oil, and gas, as well as financial services.

According to Carnegie Endowment, “meanwhile, industries with greater potential for job creation and transformation, such as manufacturing, technology and communications, agriculture, construction, and energy, each account for 1 per cent or less of total UK FDI stock in Africa.”

It is crucial to increase the quantitative understanding of UK-Africa ties. Africa has experienced its fair share of bilateral relations results, along with China, the United States, and the European Union.

With around US$3.9 billion in 2019 and as the third-largest bilateral donor to Africa, the UK ranks fourth. Additionally, the UK has trade agreements with 16 nations in Africa, both directly and through regional economic groupings.

According to The Carnegie Endowment, “UK investors accounted for the second-largest FDI stock in Africa in 2019 with US$66 billion, with roughly 83 per cent concentrated in oil, gas, mining, and financial services.”

However, the connection between the two areas is important. After the UK’s post-Brexit foreign and development policy, the relationship between the two was strengthened in 2020 during the UK Africa Investment Summit, thanks to the establishment of the UK’s Foreign, Commonwealth, and Development Office.

At the Commonwealth Heads of Government Meeting (CHOGM), this year in Rwanda, common principles and plans for improving people’s lives were reaffirmed. The most ideal goal to which almost every country in the region aspires is the economic prosperity of Africa.

Due to its current economic and diplomatic situation, Africa has a lot of influence over its future. Economic links between the West and Africa have historically been shaky and fraught with uncertainty, undermining trust and openness.

The UK provides aid to Africa through the Department for International Development (DfID), which covers health, education, and civil rights. African Free Continental Trade Area (AfCFTA) is one of the tools on the table as Africa builds its mechanisms for sustainable growth.

The UK-Africa Investment Summit 2020 provided the area with a platform from which to present the proposal. Mutual ideas were established with the assistance of the former British Prime Minister Boris Johnson, heads of state and ministers from African governments, CEOs and executives from British and African companies, financial institutions, and other interested parties.

The UK-Africa Investment Summit successfully advanced ambitious plans to strengthen business and investment ties with Africa, which is essential for achieving sustainable growth. The conference introduced some important concepts, such as helping African nations restructure their economies by empowering women and young people.

The second set of activities focused on securing sustainable financing. It included a step-up in the financing of infrastructure, a new relationship with the city of London, and the development of Africa’s clean energy infrastructure.

“During the conference, several financial agreements were also struck. There have been announced business agreements worth more than £6.5 million (US$7.69 million) between UK businesses and African partners. Additionally, the UK government pledged to sponsor initiatives totalling more than £1.5 billion (US$1.7 billion) through UK aid, with the expectation that this would help Africa attract an extra £2.4 billion (US$2.84 million) in private investment,” according to this statement from the UK Parliament.

In terms of trade, the UK has the chance to capitalise on the region’s ability to provide favourable economic cooperation, particularly in facilitating agricultural products’ export to European markets. But also build a solid foundation on UK-Africa relations.

Africa is changing its course and opening up to foreign investment. As both governments work to expand their markets on all cardinal points, Rwanda and Tanzania are altering how business is conducted throughout the region.

Any region must cultivate and engage in relationships that are open and trustworthy. The UK has the opportunity to assist Africa’s development goals and involve itself as a key trade partner. The UK-Africa relations have an opportunity to change the old narrative of bilateral relationships and proceed towards sound partnerships.