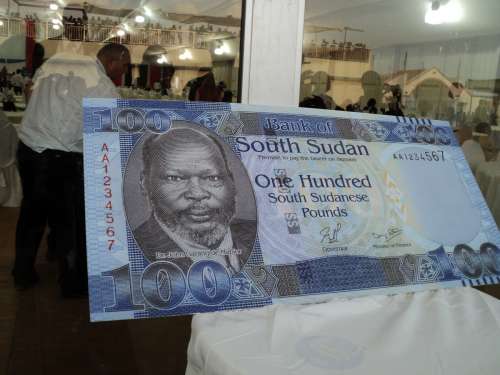 The guns on the plains of South Sudan seem to have fallen silent. But there is a more severe battle going on. The country is experiencing on of its worst financial crisis since its independence with prices of basic goods skyrocketing to unprecedented levels.

Some news agencies are reporting that communities are opting to live in UN refugee camps, where they are assured of a meal and shelter rather than live in their own homes. The central bank is unable to intervene and reduce the country’s skyrocketing inflation rate, which now stands at 35%.

The situation has been attributed to multiple issues. The country has hardly been peaceful since it gained independence from Sudan. There has been heightened political animosity which has often led to full-blown military conflict.

There has been little or no investment to a point where the UN has considered paving some of the roads in the country. Corruption has also been noted with the little resources the country has going to rich people affiliated with the government. A three-member UN Commission on Human Rights published its findings in February noting that accountability was long overdue in South Sudan.

“We see a link between economic crimes and other issues because the quest for power becomes a quest to control resources. Much of the drawn-out contestation in negotiations about the number of states was about oil resources in particular, so there is a lot of work to be done in setting up [accountability] systems,” the report noted.

The bane of oil dependency

Equally, the country is extremely dependent on oil prices. However, with reduced global demand for oil as the world stood still during the Coronavirus pandemic in early to mid-2020, the prices of oil dipped and this worsened its financial situation.

Production of crude oil, South Sudan’s main revenue source, has slumped to about 165,000 barrels per day, while the global price has dropped due to the coronavirus pandemic. The nation earns only $4 to $6 per barrel of crude today, or $30 million a month, whereas in 2011, South Sudan earned $900 million a month from oil exports.

South Sudan is one of the most oil-dependent countries in the world, with oil accounting for almost the totality of exports, 90% of revenue, and more than one-third of its gross domestic product (GDP).

However, it is the inability of the Central Bank of South Sudan to regulate the inflow of foreign currency that has had a greater impact on the inflation of Africa’s youngest nation. The country first tried devaluing its currency in 2015 with little or no desirable results. With political instability, many players have opted to trade in dollars, and in some cases Ugandan shilling which offers them some stability. The country has on occasion unleashed police to rein in black market trade on currencies with little success.   The devaluation of the currency is expected to stop a dramatic fall in value as well as mop up excess foreign cash in circulation from the black market. The last mop-up momentarily helped but a weak monetary policy buoyed by turbulent political times has seen the situation return unimproved.

However, it is this latest crisis that has the government thinking again on how to tame the slide of the South Sudanese Pound. There have been plans mooted to change the currency altogether. The information Minister Michael Makuei Lueth announced there were recommendations given by the monetary committee to introduce a new currency to control the free fall.

“This is a decision taken by the Cabinet. This is in order to improve our infrastructure, our economic situation. This is a normal situation that has been happening and there is always a solution. So, the cabinet has decided that the currency should be changed,” he said at a news conference in the capital Juba.

“The currency should be changed so that anyone who does not take his money to the bank is left out and will lose that money,” Lueth said.  “This advice goes to those who are hoarding money; hurry to the banks and put the money in the banks, so that you can avoid queuing up when the time comes for the exchange of currency.”

Dr. Marial Awou Yol an economist and the vice-chancellor of the University of Upper Nile disagrees with this and notes that in general, a change of a currency does not cause any fundamental change in an economy.

“Whether the currency is in the hoard or deposited in a bank, it remains the property of the owner who has an absolute right to withdraw it from his/her bank accountant time. A change of the currency only mops up and channels the strayed currency into the banking system.”

Earlier this year, the Central Bank came out to issue a statement to deny that it was staring at empty coffers. This was following reports that it has run out of foreign exchange reserves. This as a matter of fact is thought to be the genesis of the economic crisis, with lack of these reserves to stabilize the economy.

Is mopping up of cash off the streets worthy?

South Sudan continues to under-invest in sectors that would have the largest knock-on effect on poverty reduction and building resilience, with expenditures skewed toward defense and security at the expense of service delivery.

Consequently, poverty levels are expected to remain extremely high on the back of severe food insecurity and limited access to basic services across the country. About 82% of the population in South Sudan is poor according to the most recent estimates, based on the $1.90 (2011) purchasing power parity (PPP) poverty line.

There have been calls to radically shift towards a new policy that would help the young nation build its economy and prevent such crisis from rising. According to Abraham Matoch, an economics professor and vice-chancellor at the Doctor John Garang Memorial University of Science and Technology in Bor who was recently quoted by a local publication, South Sudan in Focus, saying this was going to be inevitable.

“There’s no rule in a new country wishing to reconstruct, rehabilitate, and reconstruct to move immediately into a free market economic level which is more or less a catalyst, and therefore, I encourage having a developmental state economic system because we cannot apply a capitalist economic system in a developing country,” he said.

He continued, “If the commercial banks or the forex [bureaus] go and abuse the exchange rate to keep the bulk of the money or dollars with them for black marketing, this will affect the economy. And this is exactly what has actually happened.”