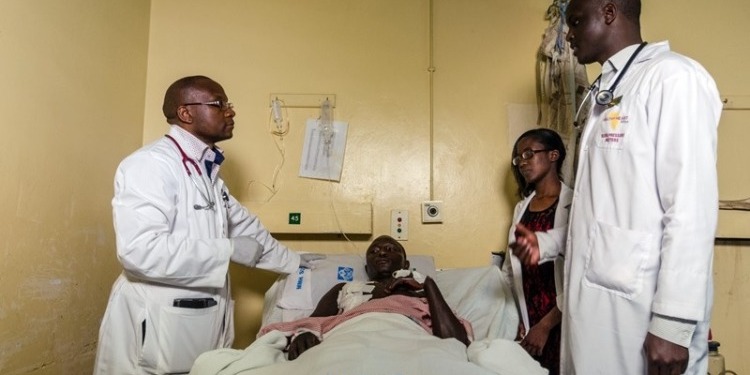 A patient being attended to at the Kijabe Hospital in Kenya. Climate change has led to an increase in disease carrying insects and the emergence of new diseases in Africa. [Photo/ African Mission Healthcare]

In comparison to a decade ago, the calamities now have intensified leaving in their trail unprecedented suffering especially for Africa's poor.

This year has been plagued by catastrophic wildfires and heatwaves, floods and droughts making it even more urgent to address climate change.

In comparison to a decade ago, the calamities now have intensified leaving in their trail unprecedented suffering especially for the poor. However, for the poor and rich alike, the toll is unbearable, especially on a regular basis.

This is why it is important that the annual meeting of the United Nations Framework Convention on Climate Change (UNFCCC) should ensure that deliberations give more than lip service to the topic.  Also known as COP26, the 26th Conference of the Parties has all 197 states which are parties to the UNFCCC represented in Glasgow, Scotland.

Threat to human health and lives

Sub-Saharan Africa (SSA) has four climate zones characterised by desert, semi-arid or Sahel, savannah (grasslands) and tropical forests. If climate change was not such a threat to these zones, Africa would have done well in producing resources for its 1.3 billion inhabitants. However, the reality is that none of these climatic zones is safe from the effects of climate change.

With increasing temperatures and rising sea levels, changing precipitation patterns and extreme weather changes, Africa stands no chance since the compounded effects are a threat to human health and lives, safety, food and water security as well as socio-economic development.

To mitigate the effects of climate change in Africa, many leaders have made an urgent call for accelerated momentum on Africa’s adaptation efforts.

On April 6, 2021, Africa was the focus of a leaders’ dialogue that sought ways to boost efforts to adapt to the impacts of climate change. At the meeting, there were calls for massive scaling up of climate adaptation in the region.

A common roadmap, the Africa Adaptation Acceleration Program (AAAP), was debated. The aim of the initiative is to spur climate-resilient actions on the continent through a three-prong approach including addressing climate change, Covid-19, and the continent’s emerging economic challenges.

During the event, UN Secretary-General, António Guterres, urged all international partners to pledge their support to the AAAP.

This is not new despite the fact that Africa contributes the least to the climate crisis yet faces the most devastating impacts. The call to support Africa has been made severally in subsequent COP events but nothing tangible has come out of these.

As the debate continues in Glasgow, the multiple threats of climate change continue ravaging the continent.

In 2019, for instance, The State of the Climate in Africa report documented high-impact events in 2019. Among the most destructive was Cyclone Idai which resulted in hundreds of casualties while displacing hundreds of thousands.

The Southern Africa region experienced extensive drought in 2019 while the Greater Horn of Africa, in contrast, suffered from massive floods and landslides which were associated with heavy rainfall after they shifted from dry conditions in 2018. The Sahel and the surrounding areas were also affected by flooding from May to October 2019.

The report showed that sub-Saharan African countries which are prone to drought saw the number of undernourished people increase by 45.6 per cent since 2012.

With the continent heavily reliant on agriculture which also accounts as the region’s economic backbone, the errant weather patterns need to be addressed as a matter of urgency. Mitigation measures should have already been taking place continent-wide to prevent the suffering of millions threatened by these shifts. If data from recent years is anything to go by, Africa is an exposure hot spot and already vulnerable to climate variability impacts.

As it is, reduced crop productivity has been recorded in different parts of the continent due to the heat and drought stress which has also increased pest damage, crop diseases damage and floods. The outcome is that the food system infrastructure has been negatively impacted adversely affecting livelihoods regionally, nationally and at individual household levels.

Looking to the future, the statistics paint a grim picture unless remedial measures are taken now.

The report indicates that major cereal crops which are grown across Africa will be adversely impacted by the first half of this century.

In the worst-case climate change scenario, West and Central Africa will register a reduction of yields by 13 per cent, 11 per cent in North Africa while East and Southern Africa will see an 8 per cent drop.

Millet and sorghum, which are not grown by the majority of smallholder farmers who make up more than 70 per cent of the agricultural output in Africa, remain resilient and will only incur yield losses of just 5 per cent and 8 per cent respectively by 2050. Wheat and rice, which also happen to be staples, will be the most affected crops losing 12 per cent and 21 per cent respectively in yields by 2050.

This means that Africa is staring hunger in the face due to the consequences of indecisiveness by policymakers in the climate change discourse.

Food insecurity is not the only threat to Africans but the consequences of climate change will affect their health significantly.

Biting insects have found the conditions suitable to breed and thrive with the transmission of vector-borne diseases such as dengue fever, malaria and yellow fever most likely to rise.

As a matter of fact, there are new diseases emerging in regions where they were not present previously. Records show that an estimated 93 per cent of global malaria deaths occurred in Africa in 2017.

With the warming conditions in the East African highlands, malaria is becoming common since malaria-carrying mosquitoes can now survive at higher altitudes. Malaria epidemics used to occur after periods of unusually heavy rainfall.

On the economic front, the Gross Domestic Product (GDP) in the five African sub-regions would suffer significantly as a result of global temperature increases. Unfortunately, a disproportionately large number of low-income countries are located in these regions.

The International Monetary Fund notes that the most adverse consequences of climate change are concentrated in regions with hot climates.

If these are not reasons enough to act now, then the most plausible explanation is that Africa is on its own.