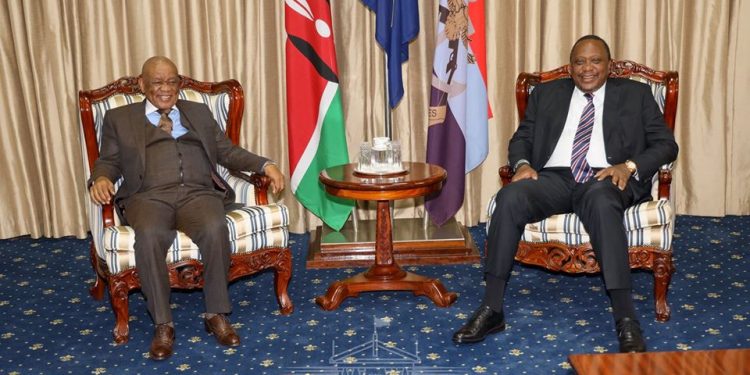 Lesotho's Prime Minister is in Kenya for a three-day state visit.

by Chacha Mwita
in Africa's Development, Industry and Trade
0
Share on FacebookShare on LinkedIn

Kenya and the Kingdom of Lesotho have signed three key pacts that are geared towards boosting bilateral cooperation between the two countries.

The deals signed at the end of talks held between President Uhuru Kenyatta and the Right Hon. Dr Motsoahae Thomas Thabane, Prime Minister of the Kingdom of Lesotho at State House, Nairobi , were an agreement on the establishment of a Joint Commission for Cooperation (JCC), a Memorandum of Understanding for bilateral consultations as well as a Memorandum of Understanding in the Field of Sports.

Prime Minister Thabane, who arrived in the country on Sunday evening for a three-day state visit, was formally received on Monday morning by his host President Kenyatta at a colourful ceremony that included a guard of honour mounted by a detachment of the Kenya Army and a 19-gun salute.

The elaborate state reception ceremonies were followed by a private meeting between the two leaders before they led their respective delegations in bilateral talks that culminated in the signing of the agreements.

The agreement on the establishment of a JCC will enable the two countries to identify and explore areas of cooperation while the MOU on sports will provide an opportunity for development of sports as an economic activity.

Addressing the press after the bilateral talks, President Kenyatta said the Kingdom of Lesotho continues to be one of Kenya’s strongest allies on the global stage.

Lesotho has endorsed Kenya for the non-permanent seat on the United Nations Security Council.

“Your endorsement of Kenya as the Africa Union’s candidate for the non-permanent seat on the United Nations Security Council for the 2021-2022 term is affirmation of the strong bilateral relations that exist between our two sister countries,” President Kenyatta told the visiting Prime minister.

He commended the signing of the three agreements, saying it marked the beginning of a new chapter of bilateral cooperation between Kenya and Lesotho.

The President pointed out that the Memorandum of Understanding on co-operation in sports will see the two countries enhance cooperation in training and the application of sports operations.

He added that the conclusion of a framework for bilateral cooperation and political consultations will ensure that the two countries bolster their political, diplomatic and trade relations through regular and structured engagements and strategic cooperation.

“I, therefore, urge our respective teams to work expeditiously to ensure that the negotiations are completed and that the framework is put in place,” President Kenyatta said.

He said Kenya is keen to learn about developing the textile sector from Lesotho as the country implements its Big 4 Agenda especially the manufacturing pillar.

Lesotho has one of the most vibrant textile sectors on the African continent with a growing share of the global apparel market.

He emphasized that Kenya is on the verge of reviving its textile industry which has the potential to create high value jobs to help address the challenge of unemployment that is facing the youth.

“We recognise the Kingdom of Lesotho has deployed technology, utilized branding and market positioning to develop one of the best textile industries in Africa,” President Kenyatta said.

During the three-day State visit in the country, Prime Minister Thabane will lay a wreath at the Mausoleum of Kenya’s founding father Mzee Jomo Kenyatta at Parliament Buildings in Nairobi as well as visit the United Nations complex in Gigiri among other engagements.

How merged law firms plan to take on Africa