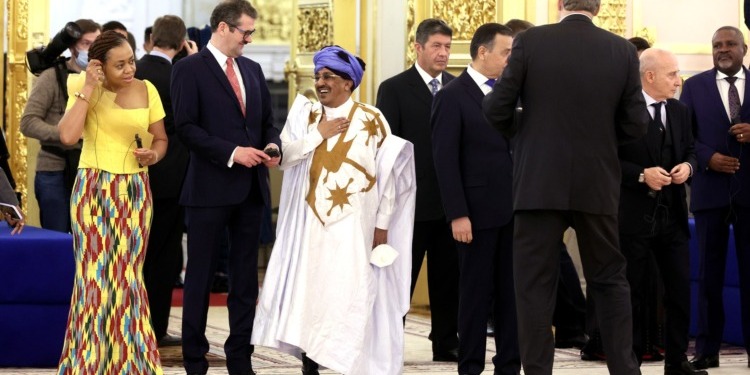 The seven new African ambassadors to Russia. They are from the Republics of Angola, Benin, Ghana, Guinea, Nigeria, Mauritania and Somalia. [Photo/Kremlin]

President Vladimir Putin outlined the priorities of Russia's foreign policy and gave a detailed overview of the current difficult international situation, as well as approaches to settling acute global and regional problems.

Russian President Vladimir Putin has reiterated some aspects of Russia’s foreign policy agenda when he received letters of credence from 20 foreign ambassadors, including seven from Africa, who had arrived in the country to begin their duty tour.

The seven new African ambassadors are from the Republics of Angola, Benin, Ghana, Guinea, Nigeria, Mauritania and Somalia. The ceremony formally marks the official beginning of the ambassadors’ duties in the Russian Federation, and it usually takes place twice a year in the St. Alexander Hall of the Great Kremlin Palace.

President Vladimir Putin made concrete reference to his earlier speech delivered in November at the expanded meeting of the Foreign Ministry Board, in which he outlined the priorities of Russia’s foreign policy and gave a detailed overview of the current difficult international situation, as well as approaches to settling acute global and regional problems.

He has been consistently pursuing the idea that it is possible to effectively cope with the numerous challenges and threats only through joint efforts of the entire global community, that Russia was ready for such cooperation.

“In fact, I believe that without joining the efforts of all states, without establishing mutually beneficial and equal cooperation it will be impossible to address such difficult global problems and achieve success in fighting climate change, or countering terrorism and organized crime, or ensuring sustainable development,” the Russian leader stressed.

During his speech at the ceremony, Putin said Russia was ready to raise economic cooperation including developing investment and deepening trade, as well as increasing humanitarian assistance to African countries.

Putin told Ambassador Augusto da Silva Cunha from the Republic of Angola, that Russia has long friendly relations with Angola.

“What matters most is that, together with our Angolan friends, we intend to fully develop a comprehensive cooperation, to promote political dialogue and carry on joint work in trade, investment, and culture among other things.”

These, in particular, were discussed during the Angolan Foreign Minister’s visit to Russia in October.

At the ceremony was Akambi Andre Okounlola-Biaou from the Republic of Benin. He was reminded that Russia continues expanding its interaction with Benin. Notably, it is currently drafting an intergovernmental agreement on military cooperation and a memorandum of understanding in the area of sport. Russian companies are interested in participating in joint geological prospecting, energy and infrastructure projects in Benin.

Ghana’s ambassador Lesley Akyaa Opoku-Ware is serving her second term in Moscow. Putin noted the steady development of the bilateral relations and pointed to efforts at expanding interaction in the field of trade and energy, including the peaceful nuclear development in that country. “We jointly produce minerals and hydrocarbons. And, of course, we will continue to train professionals for various sectors of Ghana’s economy,” Putin added.

With the Republic of Guinea, represented by the newly arrived Ambassador Maju Kake, Russia hopes that political life in this West African country will soon stabilize, and will attain a national accord. For many years, Russia has been offering substantial investment into the Guinean economy.

Russian companies have been producing and processing mineral commodities in Guinea. According to Putin, it is now time to implement new interesting projects, including those in the sphere of energy, infrastructure, fisheries and agriculture.

Abdullahi Yibaikwal Shehu is the new ambassador from the Federal Republic of Nigeria.

Russia is satisfied with Nigeria as a key partner in Africa. Putin said: “We talked with President Muhammadu Buhari during the Russia-Africa Summit held in Sochi two years ago. We hope that the Nigerian leadership will support Russia’s initiative to hold another meeting between the Russian and African leaders in 2022.”

Russia leader added, “As for specific areas of bilateral cooperation, we find the expansion of the detailed dialogue on topical problems related to supporting stability on the global hydrocarbon markets, countering terrorism and religious extremism, to be quite promising.”

At the ceremony, Putin told Mohamed Mahmoud Dahi (Islamic Republic of Mauritania) that “There are favourable opportunities for expanding trade and economic ties with the Islamic Republic of Mauritania, including in the area of high-seas fisheries where we cooperate closely.” Russia, however, appreciates Mauritania’s substantial contribution to fighting terrorism in the Sahara-Sahel zone.

With Hassan Abdi Daud from Somalia located in the Horn of Africa, Putin told him that Russia has advocated for expanded cooperation with the Federal Republic of Somalia.

Reports indicate that currently, Russian-Somali relations are at a very low level, with Russia having sent humanitarian aid to Somalia several times.

That the Somalian Government is working actively to strengthen the country’s sovereignty and territorial integrity, it is fighting terrorism and extremism, striving to create favourable conditions for the socio-economic revival. “We hope that all these efforts will be crowned with success,” asserted Putin.

Putin hopes that with ambassadors’ active participation, these relations will be filled with new content, further hopes for mutually beneficial projects and useful initiatives and, in general, will make rapid progress for the benefit of the people and in the interests of international security and stability.

Due to the unfavourable pandemic situation, Kremlin still had to hold the ceremony for the newly arrived ambassadors to present their letters of credence in a strict and limited format. At the start of the gathering, Putin congratulated them on the official start of their diplomatic assignments in the Russian Federation. Russian authorities pledged to help and offer necessary assistance to all the foreign envoys in pursuit of their official assignments in the Russian Federation.