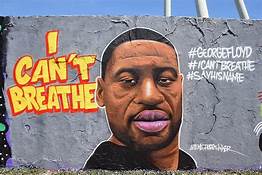 Graffiti artwork of George Floyd, his killing by police sparked global protests that are changing socio-economic perspectives all around the world.

The Economies of Black Lives Matter

The purpose of the police force is to serve and protect the public, use of force, excessive or otherwise should not exist at all. If police have to use force, then the arrest should include a charge against the perpetrator stating a violation that led to use of force.

Protesters in the US, UK, France, Germany, Africa and elsewhere have caused huge economic impact during their protests and brought to light even larger economic inequalities that are bound to cause a major power shift in the years to come.

While the death of George Floyd in the hands of police wrought on the US political convulsion, it is the economic inequalities that have a lasting and profound effect. Issues of housing, education, health and employment have been pushed to the forefront of the national consciousness.

Take for instance the fact that in just one US city, the cream of the pie, the top 1 percent of New York’s elite actually earns well over 40 times more than the remaining bottom 99 percent, and this is according to the Economic Policy Institute.

So the movement is also an advocacy for lawmakers to help close the racial income, wealth and opportunity gaps.

The movement is calling, and this is for all countries including those in Africa, to invest in social safety for the less privileged who actually make up the larger chunk of society and represent the bigger percentage of and nation’s workforce.

Job creating programmes should be the centre of national development policies because financial inequality seats at the core of most all social disputes. In this regard, emphasis must be placed on women because race aside, gender income inequality worsens the situation.

Health is a major economic aspect affecting day to day work performance of individuals and costing nations millions of dollars every year in health care provision. Well, according to the New England Journal of Medicine (2017) African Americans are three times more likely to die from exposure to air pollution than the general population in the US.

So you have the larger portion of your work force earning less than everyone, yet suffering more health issues than the rest. This is a very unbalanced equation in the economy of things, in the long run, production will slow if not fail by becoming ever increasingly expensive as the country incurs more and more health costs and workers take more and more time off and even when present, they under perform due to poor health.

Here again is an economic equation, because if countries work towards achieving green economies then they have better chances of operating sustainably and creating increasingly more jobs.

Consider the case for the US, where the “Political Economy Research Institute at the University of Massachusetts Amherst that envisions 90 million jobs being seeded over the next 10 years through a suite of proposed green legislative and executive measures spanning broadband, rail lines, water treatment facilities, retrofitting houses, installing photovoltaic panels and restoring agricultural land,” notes Adrien Salazar, a senior campaign strategist for climate equity.

On a larger scale, what is happening in the US happens in Africa, income inequality between the continent and the Western World is just unfathomable. The African child is born into imposed poverty and the African man lives in economic oppression.

The contracts that African countries are given by the West, including the US, are just not favourable to say the least. Every time Africa, receives so called aid, it is in turn forced to surrender resources, which by merit of said contracts, Africa has no technology, or shall we say, is not allowed to develop the technology to process the resources into final products.

However, when Tanzania and other East African countries decided to stop importing second hand clothes from the US so that they may boost their domestic textile industries, they were warned that they will be in violation of the AGOA accord.

When Kenya needed a fast speed railway, China extended a loan, the terms so insanely impossible, now Kenya’s railway is operating and a loss and it is to payback to China sums in excess of half of its annual GDP.

Africa is forced to remain poor and oppressed, to serve only as a market for western products and source for cheap resources and even cheaper labour. While the West produces green house gases in their manufacturing cities, agriculture dependent Africa dies of the resulting climate change.

While it has taken center stage this past few months, the Black Lives Matter movement has been in existence for some time now. It first took public stage in 2013 with the use of the hashtag #BlackLivesMatter on social media following the acquittal of George Zimmerman in the shooting and killing of an African-American teenager named Trayvon Martin (February 2012).

The Black Lives Matter movement advocates for non-violent civil disobedience in a bid to protest against incidents of police brutality against Afro-American people in the US.

It again took public attention in 2015 when it launched a new arm to push its cause, Campaign Zero. This was a group that sought to effect legislative change by lobbying for policy amendment at federal, state and local levels as well.

On its website, Campaign Zero stated their primary goal as follows: “We must end police violence so we can live and feel safe in this country. We can live in a world where the police don’t kill people by limiting police interventions, improving community interactions and ensuring accountability.”

The group managed to effect the creation of a “civilian oversight board” which reviews and investigates citizens’ complaints and allegations of misconduct against the police in the City of St Louis City.

The purpose of the police force is to serve and protect the public, use of force, excessive or otherwise should not exist at all. If police have to use force, then the arrest should include a charge against the perpetrator stating a violation that led to use of force.

In Accra, Ghana the Economics Fighters League is considering taking legal action against the police after the police broke up a vigil that was been held in support of the Black Lives Matters movement.

The group’s leader, Ernesto Yeboah  was arrested at the vigil and police said he had violated the law by not informing them of the intended gathering. The activist argued to CNN that “…it is not up to the police to approve a vigil. No one in power should be above the Constitution,” which states that “all persons shall have the right to…freedom of assembly including freedom to take part in processions and demonstrations.”

The understanding here is simple, ‘silence is complacent’ when an atrocity is committed and you witness it and stay silent then you are empowering the perpetrator and in effect supporting the victimization of the target group or individual.

By speaking up against police brutality in the US, the Black Lives Matter movement has had a global effect. It has brought before the world, the ugly realities that occur in the streets of the world’s most democratic nation.

Social injustice is not only a social affair, and while it may be poached by political agendas, the economic impacts are abound and real.