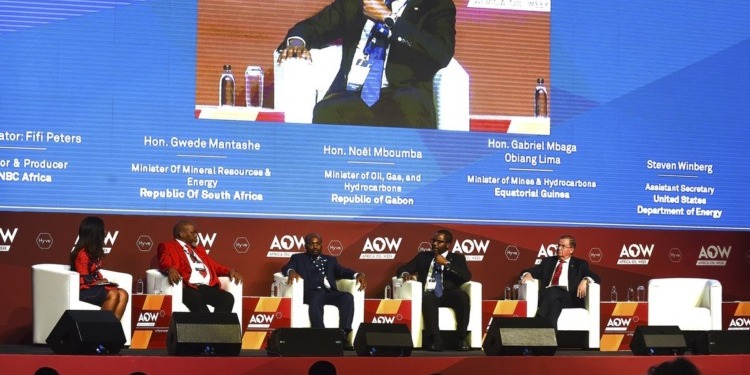 With a vast representation from African authorities, government departments, investors and key private sector players from African energy, the event saw a huge turnout of delegates from across the globe.

November 11, 2021, marked the final sessions of the most prestigious upstream conference which run for four days from the 8th of November.

The Africa Oil Week held at the Madinat Jumeirah in Dubai, saw stakeholders and leading Oil countries across the continent partake at this prestigious event which ended with high-value deals, and strong intent for future investments in the continent.

This was the first time in history in 27 years the event was being held outside the continent. it was sponsored by key sponsors including TotalEnergies, Eni, ADNOC, Chevron, Shell, and Equinor, among others.

For Africa, by Africa

With more than 45 Ministers and Government leaders attending the power-packed event, along with two Commissioners from the Africa Union, and several NGOs, AOW 2021 included comprehensive discussions about the future of the continent both in terms of achieving the green agenda and zero-emission targets, but also using the oil and gas revenues to improve healthcare, socio-economic developments, and the standard of living of the African people.

Currently, home to 1.2 billion people, with an additional estimated population of 600 million below the age of 25 by 2050, the continent relies on the energy sector to power wealth creation, entrepreneurship, private sector expansion, and industrialization.

Staying committed to the UN SDGs and the African Union Agenda 2063, the organizers of Africa Oil Week also announced the launch of the inaugural Green Energy Africa Summit 2022 (GEA Summit) on the first day of the conference.

The GEA Summit will focus on driving investments into low-carbon energy for Africa, by bringing together key stakeholders to facilitate innovation and dialogue, driving capital for the socio-economic development of Africa.

UAE’s interest in the African market

With the UAE’s investments in Africa reaching $5.64 billion in recent years, AOW will serve as a platform to fuel future collaborations and partnerships that can result in additional high-value deals in the energy sector.

In the inaugural keynote address at the AOW 2021, H.E. Suhail Al Mazrouei, Minister of Energy and Infrastructure in the UAE, emphasized the UAE’s long-standing ties with African nations and highlighted the country’s position as an emerging global financial hub.

“Africa is one of the fastest-growing economies in the world. Additionally, the huge economic transformation in the energy sector in the continent, makes it ideal for investments from around the globe, especially the UAE and the Middle East. Al Mazrouei said,

One of the key challenges being faced by the Energy sector in Africa is the problem of access to energy, where a large majority of the population have no access to cooking gas or electricity.

H.E. Dr. Amani Abou-Zeid, Commissioner for Infrastructure and Energy, African Union highlighted, Africa as a rich continent in natural and nearly all forms of energy resources, but have a problem with energy access.

He says about 600 million people in Africa do not have access to electricity and 900 million to clean cooking uerging African leaders to consolidate efforts to ensure that Africa has the appropriate expertise and technology to meet the clean energy demands of the African people.

“Africa must have its fair and just level of access to energy especially at this stage when we are moving very fast with achieving our targets and intend to carry the same momentum going forward.”He said

Moving on pace with its diversity and inclusion agenda, the AOW initiated the AOW Accelerates: Diversity & Inclusion programme, which champions greater diversity, equity and gender parity across the industry.

The AOW annual breakfast briefing this year was hosted in partnership with Lean In Energy (LiEN) and was an invaluable opportunity to explore the role of diversity and inclusion within Africa’s energy transition, host progressive dialogue and drive inclusive growth across the industry, to ensure that women have a presence, voice and opinion in shaping the industry they work in, and widen the circle to welcome male allies into their discussions.

According to Lamé Verre, Co-Chair Europe & Sub-Saharan Africa, Lean In Energy, more needs to be done to achieve gender parity in workplaces,

“I think having 50 percent of the population represented in the workforce makes good business sense. If we want diversity of thought, then it is vital to include all forms of diversity, including gender, into the picture to have sustainable, lasting solutions,” She said.

Africa Oil week is the leading business intelligence and deal-making platform for Africa’s oil and gas sector, with the continent’s most senior E&P stakeholders that facilitates with setting out the future direction of Africa’s upstream deals and transactions, securing major deals, driving investments into African projects, and facilitating new lucrative partnerships and networking opportunities for the African upstream.

US$40 billion worth of deals expected during IATF2021 Durban