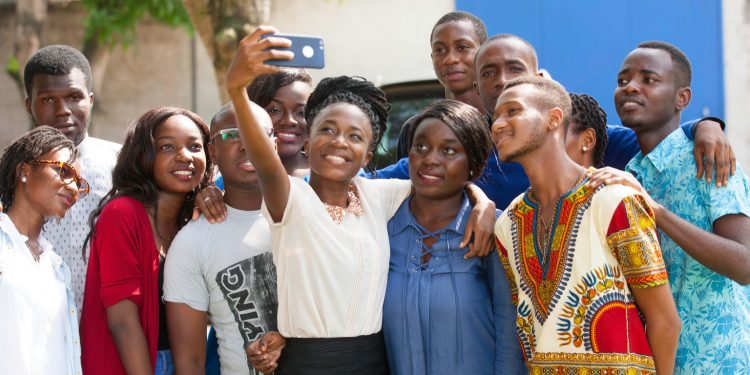 Young leaders friends of Unicef discovering U-Report, a SMS based social plateform alors accessible via Facebook and Twiiter, with more than three million users around the world, aiming at engaging young people and gathering their opinion on social issues for positive change. Abidjan U-Reporters. U-Report is a social platform created by UNICEF, available via SMS, Facebook and Twitter where young people express their opinion and be positive agent of change in their communities. Côte d'Ivoire is the 35th country to join the movement an U-Report it is more than 3 million users worldwide. U-Report is composed of three parts: A survey component that allows young people to express their opinion on different social topics, an information component that allows young people to ask anonym questions and report events that take place in a community and a discussion component that allows young people to connect with other young people about the issues that concern them. The goal of U-Report is to strengthen community participation in public debate to find solutions to the problems young people face in their community, allowing them to influence decision-making powers for positive change. In Côte d'Ivoire, U-Report is part of the youth engagement program. It is more than a tool, it is a movement.

“Given the fast pace of change, driven by the 4th industrial revolution – from artificial intelligence to robotics, machine learning, quantum computing – Africa must invest more in re-directing and re-skilling its labour force, and especially the youth, to effectively participate,” the Bank president said.

According to the African Economic Outlook report, two-thirds of Africa’s youth are either overeducated or undereducated.

Youth unemployment is rising annually with 12 million graduates entering the labour market each year and only 3 million of them getting jobs therefore, youth unemployment must be given top priority.

The African Economic Outlook report indicates that the mismatch of skill and education affect youth labour productivity indirectly through job satisfaction, wages and job searching. Overeducated African youth on average earn, 18 per cent less than the ones with the same level of education working in jobs that match their education.
Youth who believe they are over skilled for jobs are 3.4 per cent less likely to be satisfied with current jobs and maybe less productive.

The report contains several recommendations for negative trends reversal and creating adequate and productive workforces. These include designing national strategies for education and skills development that include school dropouts, young people, workers in the informal economy and in economically and socially disadvantaged groups.

“African countries can achieve universal primary enrollment by just improving the efficiency of education spending. Investing in education and infrastructure offers a greater growth payoff than investing exclusively in either,” said Hanan Morsy, the Bank’s Director of Macroeconomic Policy, Forecasting and Research.

Through its support to scientific centres of excellence, such as the African University of Science and Technology the African Development Bank is helping address Africa’s skills gap.